Is this a scene from The Wolf Of Wall Street?

It’s the spoils from millions of dollars’ worth of security fraud.

The culprits are exactly why people shy away from “green companies” that profit off climate change.

The three executives you’ll hear about took millions of investor’s funds and went full boat and Botox party with it.

Okay, it was actually boats and cosmetic surgery…

But they had “more money than god”

Instead, these cronies decided to cheat investors out of millions of dollars and live life lavishly.

Now, I’m not here to glamorize any of this. In fact, I’m writing this as a warning for you. That way you can pick up on the signs bad actors (like the ones you’ll read about) and avoid falling victim to their fraud.

Lastly, I’ll share with you a strategy that allows you to profit off the shenanigans these criminals—legally and ethically.

When it’s too good to be true… it probably is

Nanotech Engineering Inc. seemed revolutionary, and it claimed to be. It was going to change the world by showing that big, heavy, fragile and pricey solar panels were obsolete… and they had the key to the untapped energy market.

Nanotech had the Nanopanel that would be stronger than steel, thin, lightweight, and 3 to 4 times more efficient. Even if you lived in Alaska, this solar panel would get you 40% more efficiency than any regular ole panel.

Sounds like something you would want to sink your money into?

Until this month, you could have… but if you did, you’d be kicking yourself…

The SEC has placed a temporary asset freeze and restraining order on Nanotech Engineering Inc. and the 3 executives involved in the “Nanopanel” fundraising.

They claimed that their company was developing the Nanopanel. But what really happened was they defrauded more than 100 innocent people all over the US over the last 2 years. When a company pitches a revolutionary product, with no science to back it up… that’s a big red flag.

Heck, MIT (the school full of geniuses) pointed out that Nanotech’s research was completely wrong… and the company admitted it was a mistake (but they removed that article). The worst part was these came from the company’s own testing, and didn’t sign up for third-party testing until after the fact.

They solicited more than $9.4 million from investors with multiple lies and material misrepresentations. Even going as far omitting that the Chief Financial Officer of the company was masquerading under the pseudonym “Michael Hatton”.

They were also distorting and eliminating material facts in their filings with the Securities and Exchange Commission and in its private placement memorandum. Two examples of the fraud:

To add insult to injury, the minimum to invest was $28,000, the price of an unpretentious sedan. Not that these 3 would know anything about a modest taste in cars.

Nanotech was trying to raise $67.2 million in equity for using nanotechnology to develop its supposedly “revolutionary” solar panels. The company was perfectly fine with cutting corners to raise the equity it needed.

The company graduated from pressuring its employees to take part in cold calling with a reward of commissions for every investor screwed. Nanotech began using unlicensed stockbrokers as sales agents that employed boiler room type tactics and dubious claims to obtain sales and their own commissions.

Nanotech raised more than $9.4 million of its goal. No less than 100 investors were defrauded using strategies that would make Leonardo and Matthew in Wolf of Wall Street proud. Over a third of the sum reeled in went to the top executives’ good times spending.

We have an answer to the question you’re dying to ask:

What the hell did they spend the money on?

That $2.4 million and more allegedly went to indulgent personal expenses. Cosmetic surgery. Jewelry. Fertility treatments. Vaping and tobacco ($7K worth). 2 curb-hugging Maseratis. Of course, they needed a yacht too. They even named it Bella Vita.

This trio also concealed Chief Financial Officer Michael Sweaney’s, the CEO’s Uncle, had a prior felony. Want to guess what the felony was for? Securities fraud. This white-collar criminal even got off on 2 years of probation only to do it again.

A fact that surely would have made investors pause before investing. Who wants to sink a minimum of $28,000 into a company that has a felony toting thief behind the wheels of their finances?

Nanotech Engineering Inc. isn’t the only company controlled by this trio of thieves. They have Nanotech Finance LLC, 3 Dragons LLC, and Omni Golf LLC. While these companies may not be involved in any wrongdoings, they did receive ill-gotten gains.

The charges Nanotech, Michael Sweaney, David Sweaney, and Jeffery Gange face charges of violating the antifraud provisions of numerous sections of the Securities Exchange Act. And aiding and abetting the company in the same acts. The compliant wants emergency relief and permanent injunctions, the return of ill-gotten gains with interest and civil penalties for the trio and Nanotech.

The SEC also orders that the trio be prohibited from serving as officers or directors of any public company.

The whole idea is to conduct your due diligence and not just take someone’s word for it when it comes to large investments.

I know what you’re wondering… That’s great, Kyle… but how does this help me?

Well for starters, it goes to show you the fact that you should have a strategy in place to find plays… instead of being called up by random brokers and have them pitch you ideas. You see… these guys don’t know how to trade, all they care about is that commission.

So I wanted to provide you with a simple way to make money in these markets while avoiding fraudulent companies.

If you don’t know by now… Wall Street “insiders” operate covertly and look for ways to hide their trades. Why? A lot of the time, they have non-public information and still place bets on them. Since it’s illegal for them to get in on the action…

They’ve figured out ways to use the options market to their advantage. However, there is technology out there that detects their every move… legally.

That’s where my Dollar Ace system comes into play.

I noticed a number of unusual options activity orders go off in Kraft Heinz (KHC)… and there was a noticeably high open interest in the KHC January 17 2020 $32.50 calls.

So all I needed to do was look at the chart, and pick a spot. 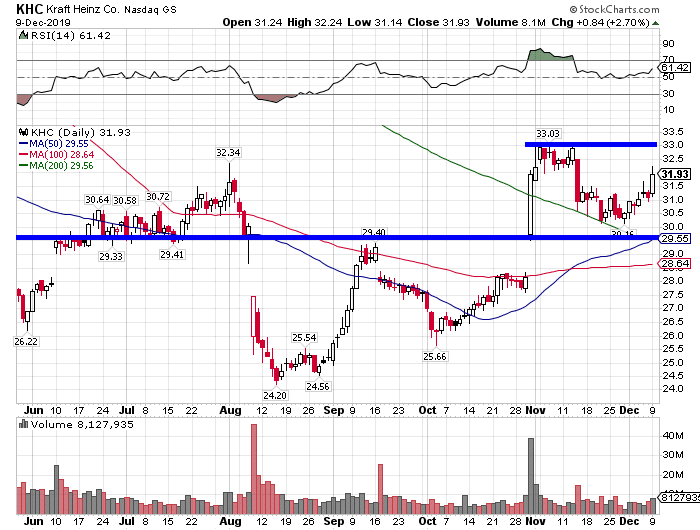 If you notice, KHC tested a resistance level… and pulled back significantly after a brokerage commented on the stock. However, I figured traders just had weak hands and panicked. However, I knew the smart money was in… so I decided to buy the calls.

There’s another way to find profits in this market…


The easiest way for you to avoid being a victim of these scandals is to look for publicly-traded companies listed on Nasdaq or NYSE. Stocks listed on those exchanges must meet stringent requirements, as well as meet certain reporting stands.

When you do that, you minimize your risk of being caught up in a financial mess.

So how do I actually find the explosive opportunities in this sea of fraudulent companies?

By filtering for biotech and pharmaceutical stocks specifically… ones that have upcoming catalyst events. After that, I drill down to until  I get my highest probability setup for the week. The whole idea is to get in on Monday and get out by Friday.

Here’s a look at one of my most recent trade setups.

Today’s trade is SRRA. The company has a beautiful continuation pattern with biotech data coming December 8th. That gives us a perfect time frame up to hold near Friday. 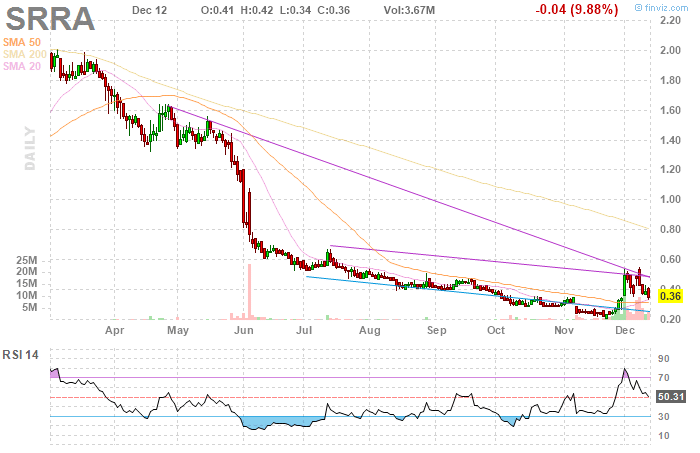 Remember to manage YOUR trade! Get in and out where you see fit.

Just a day after I sent that idea to my clients… the stock was cruising.

If you were able to buy near the low-end of the range and take profits at $0.53… you could’ve returned over 40% on your money. That’s right, if you put $1,000 into the trade… you would’ve profited over $400. Just imagine when you scale this strategy…

The profits could potentially be massive.

If you want to learn more about Fast 5 and how it can help you find the best trading opportunities out there, then click below and watch this clip now. Hurry because the next 100 people will receive exclusive pricing.