Did They Know About The SOGO News?

Sogou Inc. (SOGO) was one of the hottest stocks on Wall Street on Monday, finishing the day up 48%.

The reason for the explosive move?

Did that options player know about the news… or was it just a lucky trade?

Who knows, and who really cares.

Well, the “smart money” is throwing down bets in the options market.

If traders know where to look, they may uncover large winners.

Let me show you the activity my scanner detected in SOGO.

On Friday, more than 37K calls traded in SOGO — when you compare that to the average number of calls traded per day (177), it signals people wanted in.

At the time, it was uncertain why the Chinese search engine company was up by more than 21%…

…and why the options action was so heavy in the symbol.

But now we know.

More than 26,000 of those contracts traded on Friday…

In other words, they spent over $51K on that trade.

I don’t know about you, but that seems like an awfully well-timed trade.

Come Monday morning, the company has a catalyst that propelled the stock higher…

While the stock was hot… 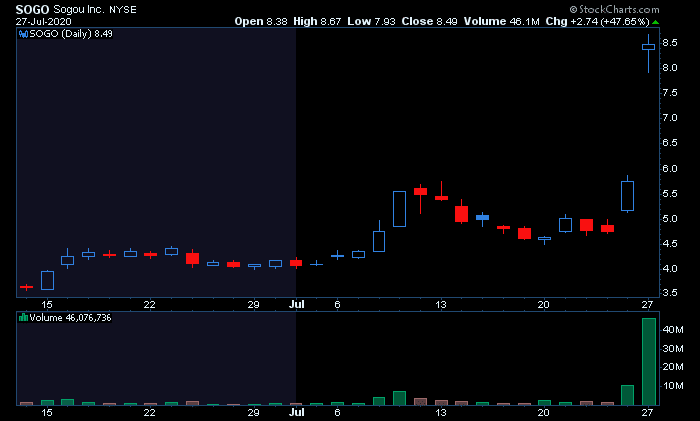 Those returns pale in comparison to the returns on the options.

That’s why it’s so important to pay attention to the “smart money”.

I know what you’re thinking, “How do you actually follow these players?”

For me, it’s simple.

I utilize my Dollar Ace Scanner.

Now, if you want to learn how I’m able to steal the “smart money’s” trade ideas…

Make sure to register for this exclusive training workshop.

You’ll learn how I use unusual options activity to my advantage, and how to uncover explosive opportunities.

Now, all I ask is you come with an open mind because what you’re going to learn may shock and amaze you.