Is this house of cards going to fall?

As we close out 2019, we can see a trend that has become common in the past two decades. Accounting scams fueled by corporate greed.

Over the last 20 years, we have seen Enron and Freddie Mac drag down faith in investing. Making the phrase “the next Enron” a common term.

One of the largest trucking companies in North America might be going down in history. It possibly will hold the title of the largest big rig company to file for bankruptcy. And it could happen as early as this month.

There were 2 masterminds behind this house of cards… but they finally got caught red-handed.

Celadon Group Inc. Swindles Shareholders To The Tune Of $60 Million

Prescience Point predicted this over 2 years ago, “Celadon Group is a house of cards on the brink of collapse”. It seems clear now that they were right, and this crumbling company owes it all to a couple of (now) former executives that screwed the shareholders out of millions and their employees out of job security.

As December kicked off so did the charges for President William Meek and CFO Bobby Peavler. The federal prosecutors and SEC charged these two executives with accounting fraud.

The scheme was centered around hiding losses by buying and selling rigs at inflated prices. At points up to triple their fair market value. Talk about a used car dealer level of shady.

These two executives basically had 2 full-time jobs and one was being a dirty filthy liar.

Many of Quality’s trucks were models well known for issues (irony in its truest form) and drivers didn’t want anything to do with them. Because of this many trucks sat idle.

Quality’s books valued them for millions of dollars over their true value. Some tractor having a value of $15,000 apiece was listed at $60,000 on the Celadon books. Williams pleaded guilty to making falsifying books, records, and accounts, among other things.

This scheme ended a loss of over $60 million in shareholder value. You can now buy a share of Celadon for under a dollar and it’s still not suggested you spend even that much.

U.S. Attorney Josh Minkler stated, “Through their scheme of lies, fraud, and misrepresentations as alleged in the indictment, Meek and Peavler damaged the integrity of the market, the corporation, its shareholders and public investors”.

In 2017, Celadon agreed to right things with shareholders affected by the scheme by paying a restitution of $42.2 million. The company also was required to pay $7 million in disgorgement.

Hanging By A Thread

In 2018, the New York Stock Exchange delisted trading for Celadon. The company was neck-deep in issues and charges. It announced it would unable to resolve its delinquencies by the current deadline it had been given.

Bringing to light that “accounting errors” stretched beyond 2016, dating back to 2014 even. Resulting in Celadon finding itself off its throne and on pink sheets OTC market.

This spring in its scramble to recover Celadon secured $165 million in financing. High hopes for a change of fortune, it seems to have been little, too late. The lifeline for the Celadon was securing even more financing. But negotiations with creditors broke down this month due to collateral issues. The forecast seems to be that Celadon will file for a Chapter 11 very soon.

It genuinely looks like Celadon reaping its karma and is slowly crawling towards death.

The chart doesn’t look too pretty in Celadon (CGIP). However, that doesn’t mean the company can’t turn itself around and come out of this mess on top. 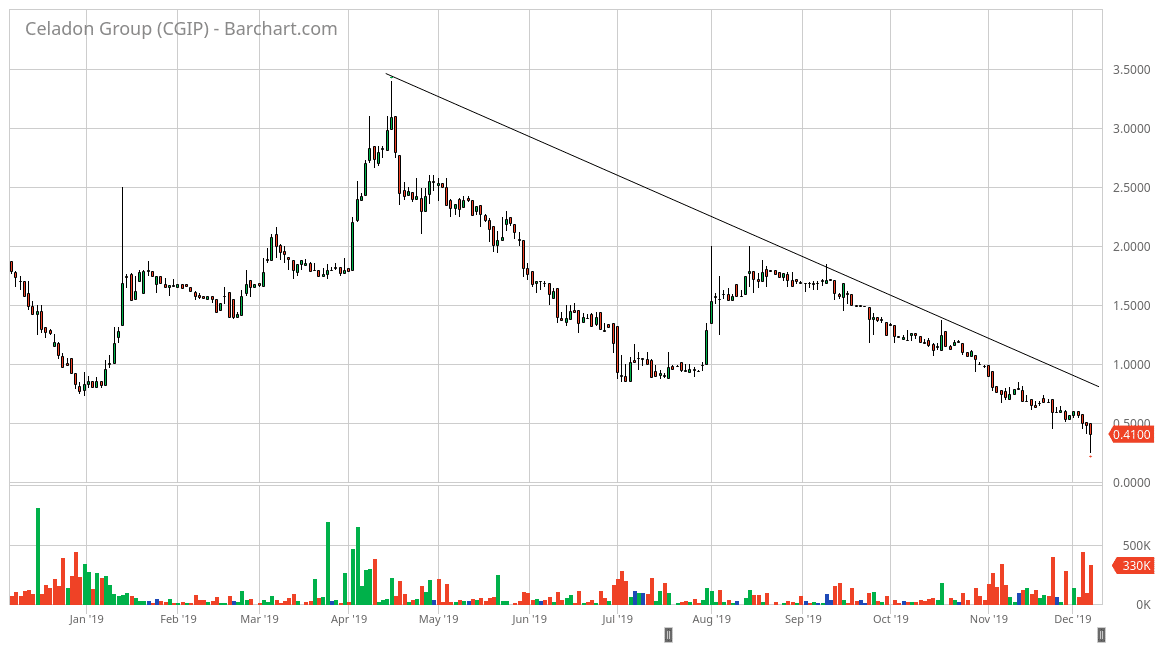