The end could be near for this historic bull market

Bull markets historically span longer than bear markets. However, bear markets are extremely violent, while bull markets tend to have a slow grind higher. Currently, this bull market has been running for nearly 10 years, and the stock market could be headed for a top soon. That said, let’s take a look at some statistics and see what exactly is going on in the market.

Dating back to 1926 through 2017, the average bull market period lasted approximately 9 years. We’re right at that average now. The bull market from the late 1980s up until the late 1990s lasted nearly 13 years, returning 816.5% over that period. Thereafter, the housing market bubble lasted 5.1 years and was up an annualized 15.5%. Currently, we’ve been a bull market for around 9 years, averaging an annual return of over 18%. This slow grind higher could be attributed to low borrowing rates, driving the market higher. That said, this has traders wondering whether we’re topping out soon.

Again, bear markets have much more violent moves than bull markets, in a shorter amount of time. Most recently, after the housing market bubble burst, we saw the market drop over 40% in just over a year. Thereafter, the Federal Open Market Committee (FOMC) cut interest rates to near 0%, one of the key drivers of this historic run. However, with new Federal Reserve President Jerome Powell coming into the picture, we could potentially see the market head into correction territory, which could lead to a bear market. 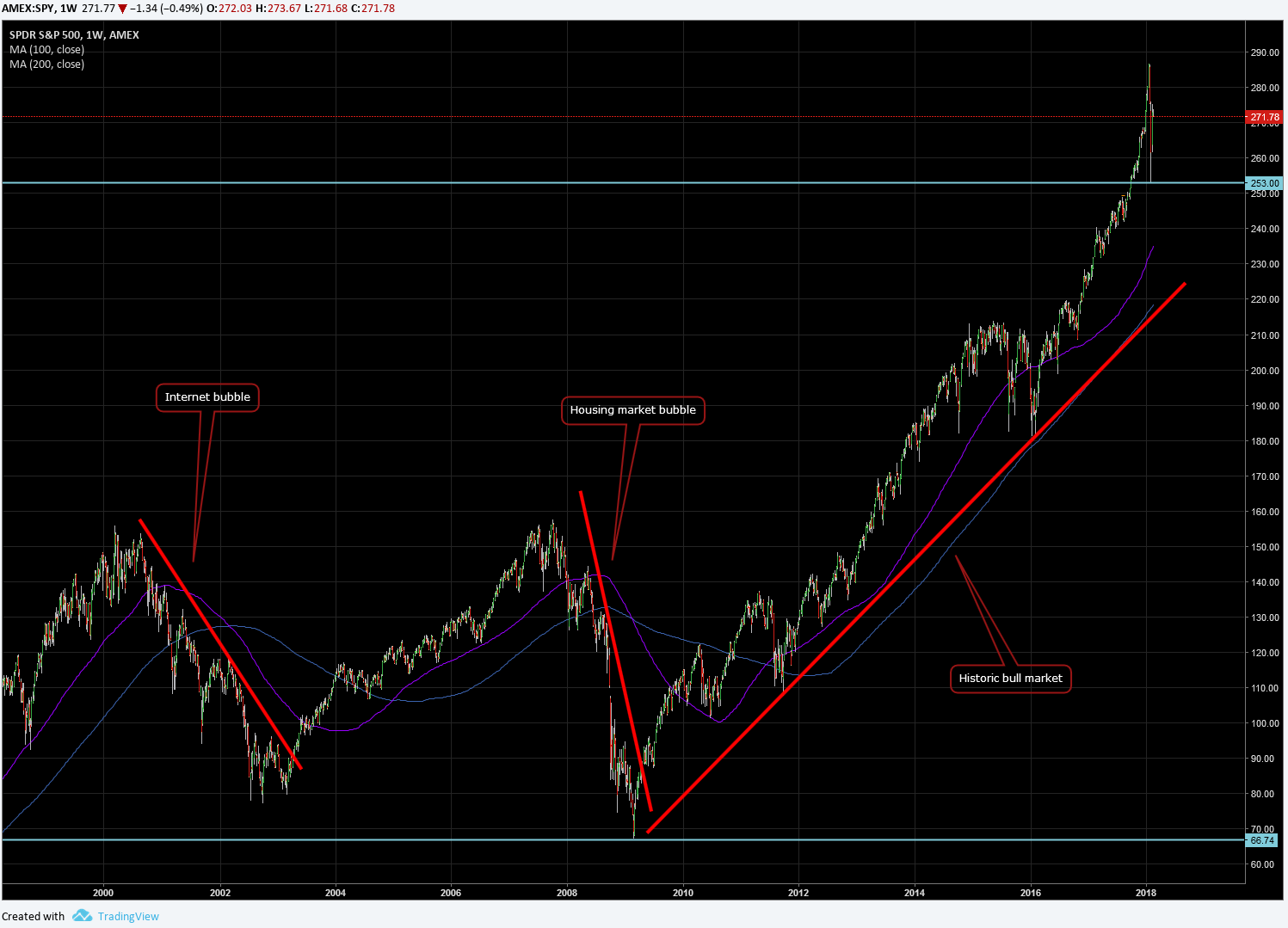 Focus on the U.S. dollar in a bull market

Here’s a look at the U.S. Dollar Index: 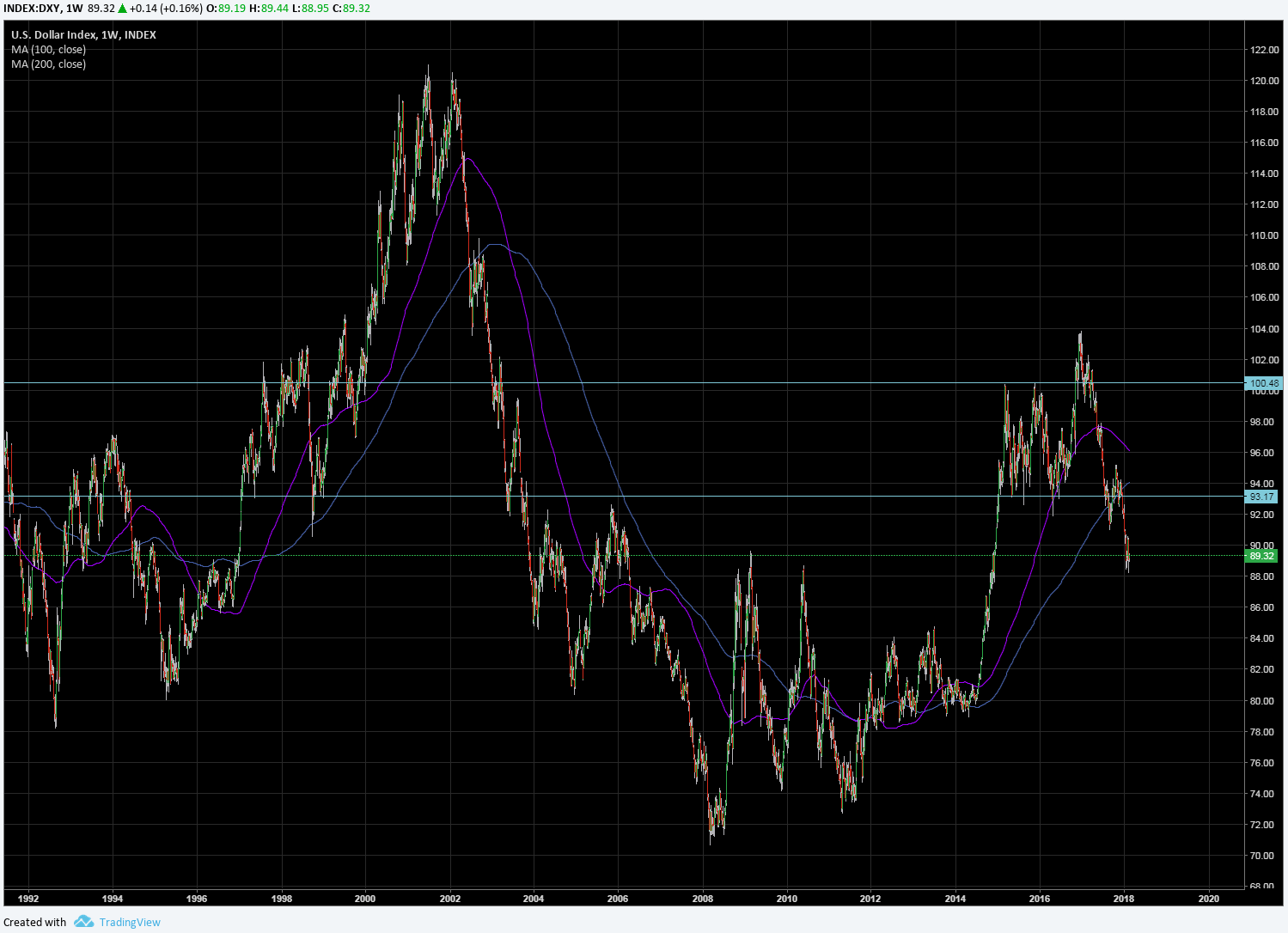 Generally, a stronger dollar is bad news for the stock market. A weaker dollar is typically synonymous to a rising stock market. The relationship between the U.S. dollar and the stock market is extremely complex. Here’s the skinny, if the U.S. dollar (USD) falls, the price of USD-denominated goods and services rise. If the dollar weakens, imports become expensive, but foreign companies are able to purchase U.S. goods and services at lower prices. In turn, this drives exports, helping to increase earnings and revenues. Consequently, this would drive stock prices. The opposite is true when the USD rises.

Currently, we’re seeing a fall in the U.S. dollar, coupled with the stock market still near all-time highs. However, one important factor that could affect the value of the U.S. dollar is the potential rise in interest rates.

With the Consumer Price Index (CPI) rising, the FOMC is looking to raise rates in an attempt to stave off inflation. That said, if the FOMC moves to raise rates four times this year, we could see a massive move higher in the U.S. dollar. Then, we may see a pull back in the stock market, and it could potentially enter bear market territory. Now, if you’re a bullish trader or investor, that’s okay. However, you need to be wary of what’s going on behind the scenes and learn to navigate the market if it starts to drop.