Focus on this economic indicator for inflation targets

Economics is one of the key drivers in the market. Whether it be stocks, bonds or derivatives, when a key economic indicator is released, there tends to be increased volatility. Currently, a main focus has been the inflation rate. The Federal Open Market Committee (FOMC) has openly stated its target inflation rate, and when it will decide to raise rates. A rising interest rate environment could affect the markets significantly. That said, let’s take a look at why you should focus your attention on inflation and the Consumer Price Index (CPI).

Inflation is simply the rise in the price of goods and services. In a rising inflation environment, purchasing power each in dollar terms declines. Also, when input prices rise, consumers purchase fewer goods. Consequently, revenues and earnings decline. Which in turn slows the economy.

Due to the negative impact of rising inflation, the Federal Open Market Committee (FOMC) focuses on determining potential warning signs. That said, the Fed would look to raise interest rates, hurting the bond market in the short term. When the FOMC raises rates, it reduces inflationary pressure and affects the U.S. dollar. In a rising interest rate environment, the U.S. dollar should appreciate.

Here’s a look at the Fed Funds rate and the U.S. dollar Index: 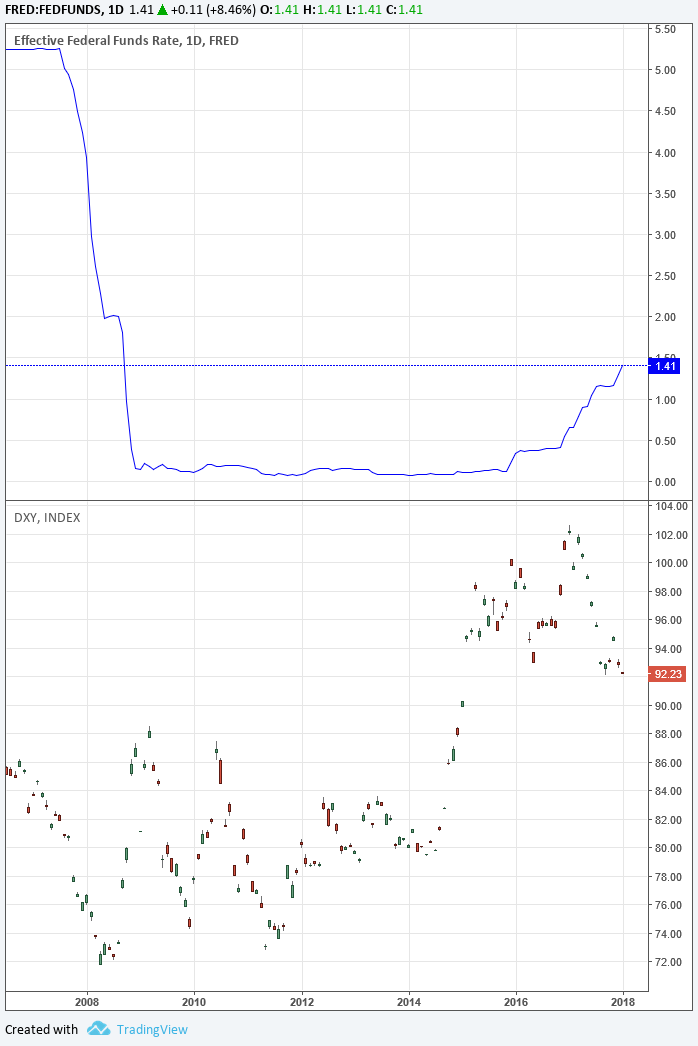 If you notice, the U.S. dollar is weak against some major currencies, despite the Fed Funds rate remaining around 1.40%. This is a disconnect.

The Consumer Price Index (CPI) is a widely-used measure of inflation. This economic indicator examines the weighted average prices of a basket of consumer goods and serves. The FOMC uses the CPI to determine whether there are any signs of inflation. Therefore, if CPI continues to rise, the FOMC may look to raise the Fed Funds rate in an attempt to stave off inflation.

Check out how the CPI has been rising over the past year:

With CPI rising more than expected for the month of January 2018, inflation fears were running high. Again, if the FOMC decides to raise rates, this should appreciate the U.S. dollar. In turn, this could cause a pull back in the market.

Although the Fed’s preferred inflation measure is the personal consumption expenditures (PCE) price index, excluding food and energy, CPI provides market participants with a rough estimate of inflation and where it could potentially head.

CPI is a market-moving indicator

Take a look at the S&P 500 Futures contract expiring in March 2018 when the CPI was last released:

That large red candle is right when the CPI data was released. Those futures contracts fell 1.80% from the open of that candle to the low.

That said, you don’t want to take your eyes off of this indicator, especially if you’re long a bunch of stocks. The bottom line here is when CPI rises more than expected, the market should fall due to the increased inflationary pressure. The opposite is true when CPI comes in lighter than expected.