How To Correctly Trade The Golden Cross

We use technical chart patterns to help identify trends and momentum in stock trading.

One of my favorites is the Golden Cross.

The Golden Cross is a pattern that signals strength and a shift to a more bullish trend.

Usually, the Golden Cross is ignored by the mainstream news media who instead focus on the opposite signal, the Death Cross.

The Death Cross is when the 50-period EMA crosses below the 200-period EMA.

The Death Cross is a pattern that signals weakness in the markets and indicates to traders of a major bearish market soon to come.

But we’ll save that discussion for a later date…

Now, when it comes to trading the Golden Cross— 90% of traders get it wrong.

Do you want to learn the correct way to trade the Golden Cross… so you can profit off this highly reliable chart pattern?

What is the Golden Cross?

And the markets are in an uptrend more than they are in a downtrend.

So once the new uptrend begins the major moving averages need to point upwards.  For this to occur, the 50-period average must cross above the 200-period average.

This change in major trend direction is known as a Golden Cross.

Here’s an example chart in SPY. 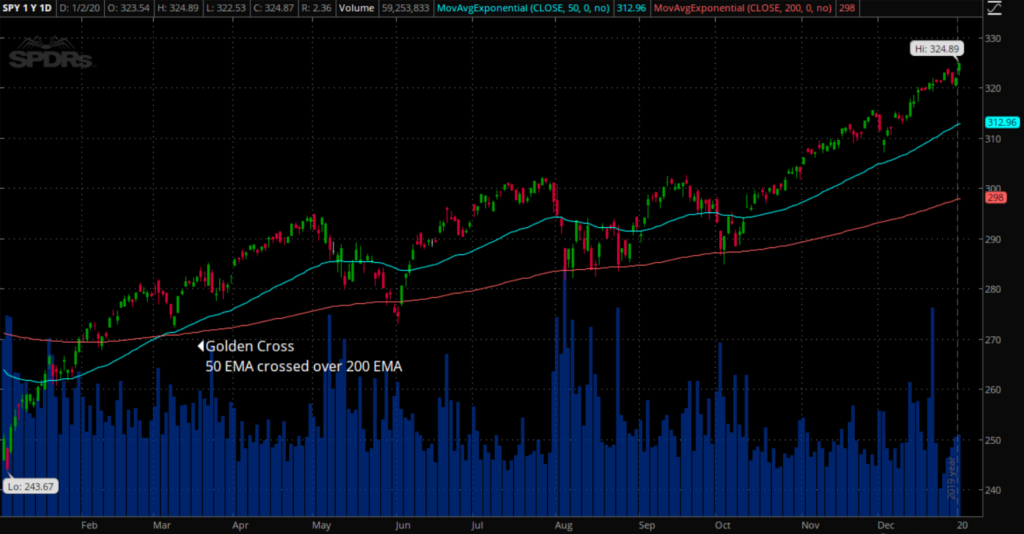 Is there anything special about the 50 and 200 period moving averages?

You could use the 30-period and 250-period moving averages to achieve the same signal.

It’s just the concept that matters.

The idea is to identify short term trend strength against the longer-term direction.

Remember:  The 50 and 200 period moving averages are the industry standard when looking for this signal which is why they are chosen.

Moving averages are just tools to express an idea.

How to NOT trade the Golden Cross

I know you are drooling about that trade in the SPY’s and want to go long the stock at every Golden Cross.

But you have to hold back that urge.

In a range-bound market there will be a lot of Golden Crosses that will whipsaw your account.

Here is an example. 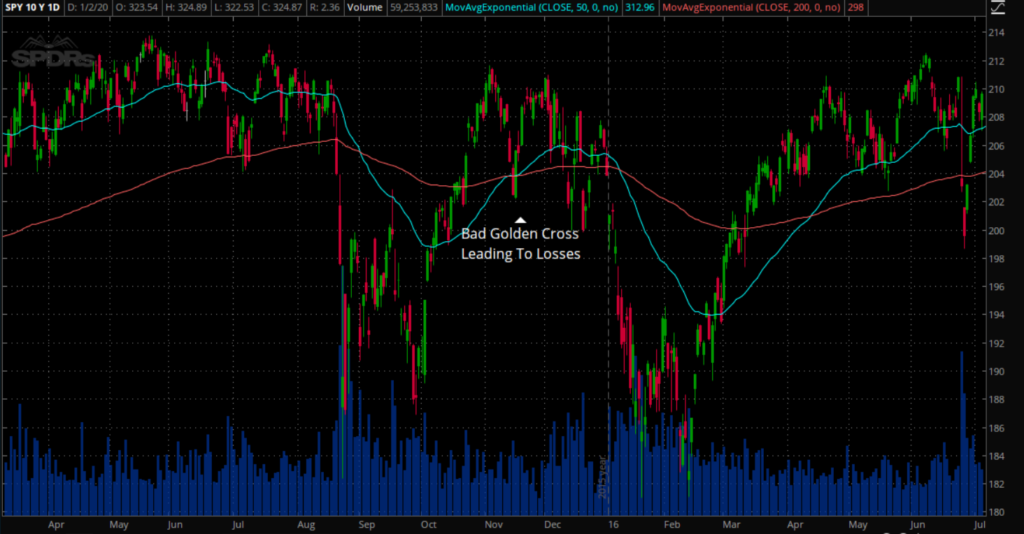 In a range-bound market the Golden Cross was a false signal and caused major losses if you blindly took the position.

Instead, there are better ways to trade the Golden Cross.

How to increase your win rate using the Golden Cross

This setup helps to benefit two types of traders…

Because the Golden Cross acts as both.

The setup/trigger trading strategy will force a trader to slow down and wait for the best opportunities to trade instead of chasing momentum in stocks.

It will also help determine long or short and trend or no-trend to keep you a trader on the right side of the trade and out of choppy sideways moving markets.

The benefit?  Both will significantly increase your win rate and risk-to-reward ratios on every trade.

Here’s how it works…

If the 50 EMA crosses above the 200 EMA, then you want to look at long direction trades only.

Note: The opposite is true as well for shorts when trading the Death Cross.

This is what I mean… 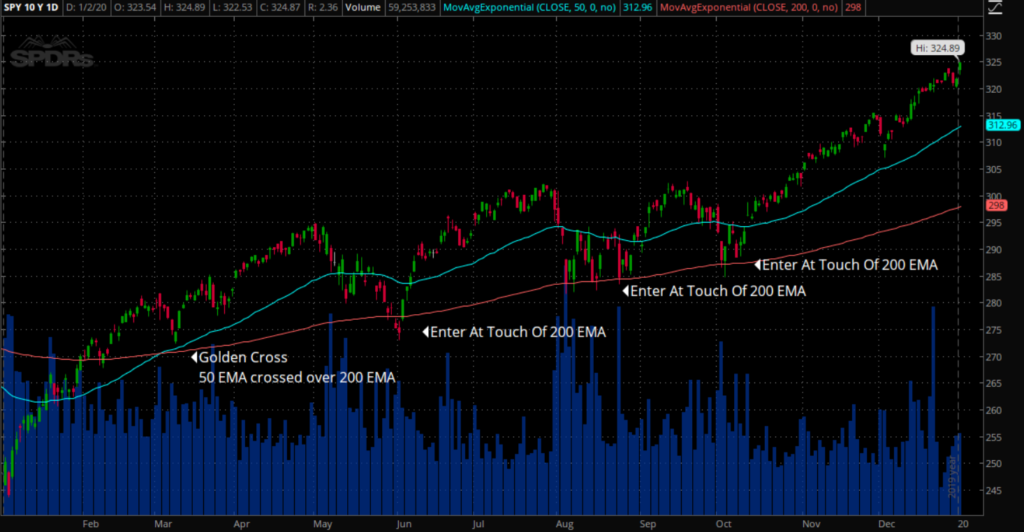 In the image above, you can see that it’s best to look for a long trade after the crossover setup occurs.

In this trade, the trigger long is when the stock trades back to the longer-term moving averages.

Why?  This is the best risk-to-reward level for the trader to get in at.

Note: If you are an aggressive trader or want to dollar cost average into your trades, it’s ok to also buy the shorter-term moving average as your initial trade.

Pro Tip: If you like to take more frequent trades, look for a flag pattern, false breakouts, bullish triangles, or candlestick patterns to form and enter long with the fast-moving average as your trailing exit.

The Golden Cross For Stock Traders

Are you a stock trader instead of an index trader?

No worry here is a trick that can help you too.

Do you know the saying… “ A Rising Tide Lifts All Boats”?

Individual stocks are influenced by their respective stock index and therefore if the index is bullish then chances are stocks will move higher with it.

For example, if the SPY is an index that is comprised of the top 500 stock, it’s safe to assume you would want to be bullish on stocks within the index if you spot a Golden Cross on the SPY.

Let’s take a look at AMD that is a stock in the SP500 right after the Golden Cross occurred on the SPY. 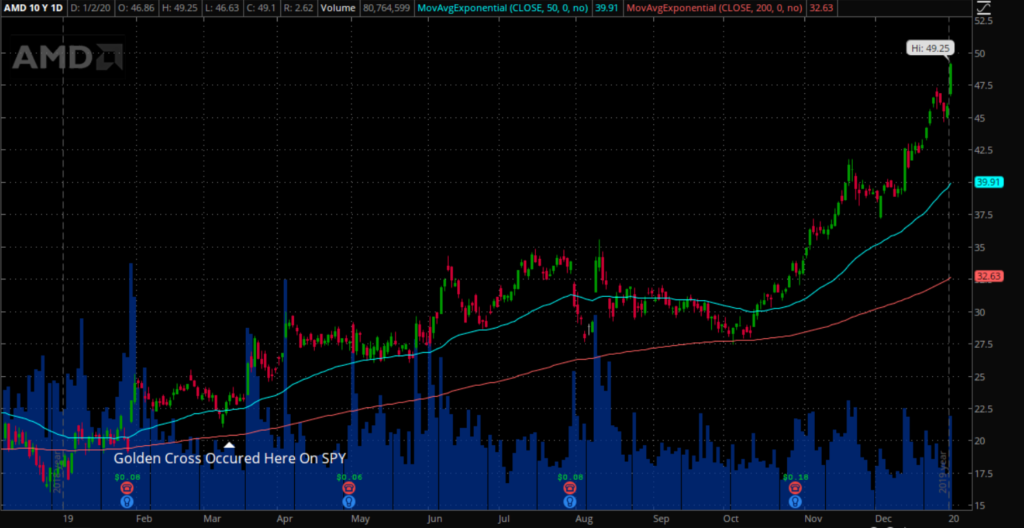 Now that we covered how to enter a trade using a Golden Cross let’s look at a simple exit technique you can use.

If you wish to ride trends you cannot have a profit target on your trade.

Instead, you need to let the markets take you out of the trade.

In order to achieve this, you would want to use a technique called a trailing stop.

This means as the market moves in your favor you will lock in your gains while giving the trade room to breathe in the event it wants to move further in your favor.

One way to do this is to use the Death Cross as your trailing stop loss.

If you are long the trade and the markets are moving in your favor, then continue to hold your position until the 50-period ema crosses below the 200-period moving average.

This is what I mean… 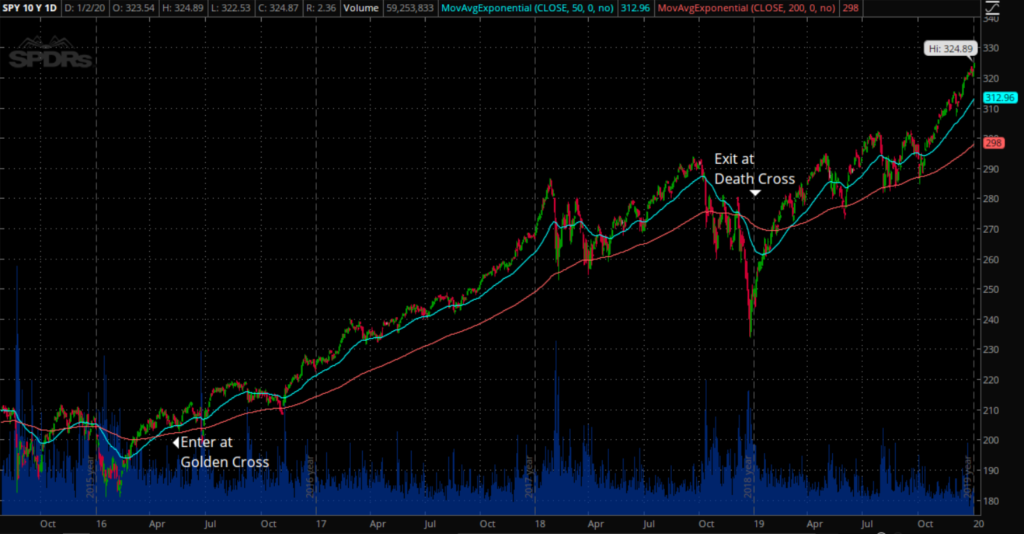 By following this simple rule – you could have taken almost a 40% profit on the SPY’s in this trade!

Remember:  Trailing stops are difficult to manage.  This example was a clean exit but many winners can become losers when trying to ride a major trend.  That is just the price you pay.

Here’s the recap of the Golden Cross:

Ready to take the next step?