The Cup and Handle Strategy Guide

Chart patterns occur when the price of an asset moves in a way that resembles a shape, such as a triangle, flag, or in this case, a cup and handle.

These patterns are formed based on human psychology and make for a visual way to trade the markets.

An added benefit is many chart patterns are all-inclusive, meaning they provide a trader an entry point, stop-loss location for risk management, and price targets to exit the trade at a profit.

What’s there not to love about trading patterns?

Well, there’s a lot of material on the internet, and many of it is fake news these days.

So without proper education, training, and a system to guide you, chances are you are just gambling.

Are you ready to roll up your sleeves and learn more about the Cup and Handle trading strategy?

How To Trade The Cup and Handle Chart Pattern

Like many chart patterns, the Cup and Handle can occur on lower level timeframes, like a one minute chart, and on higher-level timeframes like a daily or weekly chart.

The Cup and Handle pattern is considered a bullish reversal pattern and has two parts to it.

The Cup: The market shows signs of bottoming and has bounced off lows.

The stock is approaching it’s resistance levels and prior high prices.

The Handle: After the stock has made its “U” pattern, it will experience a period of consolidation that forms the Handle.

Here is an example of a Cup and Handle pattern. 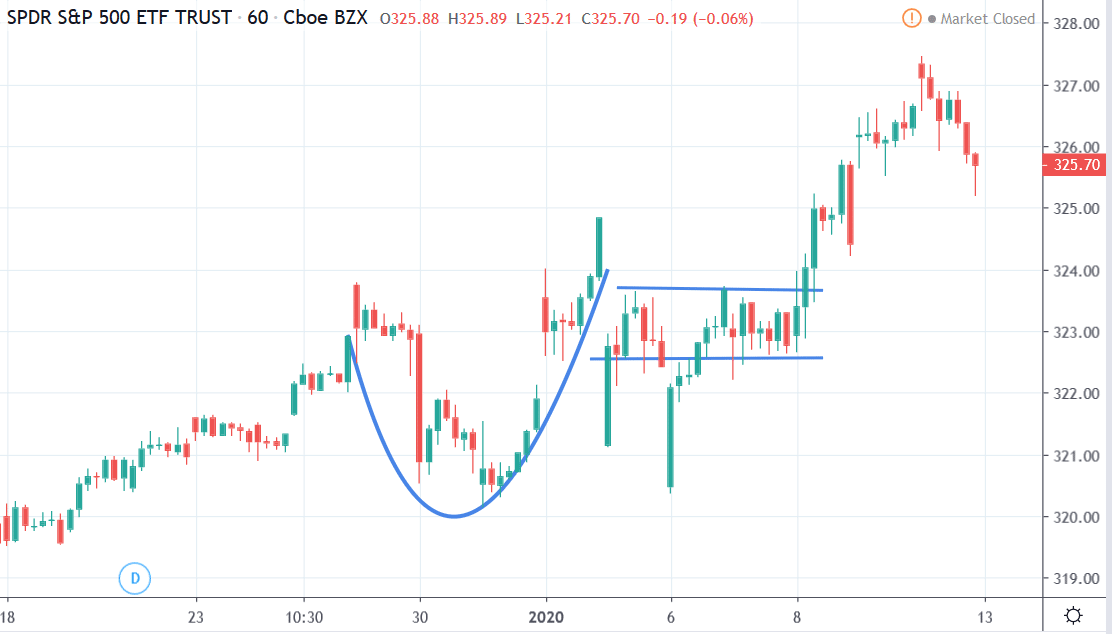 Here’s the idea behind this pattern.

As the Cup is being formed, the market is showing signs of weakness and strength by bottoming near prior support and bouncing back towards the highs.

Next, the price action is weak at the resistance caused by the cup and forces the price of the stock to go sideways or downward.

This forms the Handle in the Cup and Handle pattern.

Note: If you see a larger sell-off that goes lower than the lows formed in the Cup, this will invalidate the pattern and indicates to the trader that the markets are not ready to head higher.

But in this example, the lows were held and a consolidation channel was formed (with the exception of two bars, which is acceptable) that created the Handle.

Since prices are holding at resistance and creating a channel, that’s a sign of strength and is telling you that the buyers are willing to continue buying stock at this level.

Finally, once price trades above the upper resistance formed by the Handle, the pattern is “confirmed” and the market is now going to continue heading higher.

Pro Tip: The best Cup and Handle patterns have a shallow retracement, not exceeding ⅓ of the cup’s total size.

Where To Enter The Trade

The Cup and Handle is a bullish reversal pattern that signals to traders the markets are looking to move higher.

Ideally, a trader would want to wait for the Handle to form after the Cup has been identified.

This is then confirmed when the price breaks above the “Handle”, and that is where you would want to enter the trade.

There are two choices a trader can make at this point.

There are pros and cons to each.

Wait for the close

The good thing about waiting for the close is that it’s far less prone to a false breakout.

However, there are times where the markets will close much higher and you will get a poor entry price.

This results in widening the level between your entry price and your calculated stop-loss and result in taking on much more risk than originally calculated for the trade.

The good thing with buying the breakout price using a limit order is that you can place the order slightly above the highs of the handle and if the breakout is real, this is the best price to get into the trade at.

Unlike waiting for the close, this price level gives you the optimal risk to reward ratio and ensures you are not taking an added risk due to a poor entry price.

Unfortunately, there is no best approach here.

You should go with the execution-style that best fits your trading and risk tolerances.

This will result in much less error and will keep you trading consistently as a trader in the long run.

Once you are in a trade, you need to know where to exit in case it goes against you.

This is when you use a stop-loss order.

Where To Place Your Stop Order

Now, a stop-loss order gets a trader out of a trade if the price drops instead of heading higher after the breakout occurs.

The stop loss aims to control risk to the trader in the event that the trading pattern is invalidated.

Essentially, you want to place your stop loss at a level where that if the market trades there, the trading pattern is invalidated as well.

How To Determine If A Cup and Handle Is Invalidated

When looking to identify if the pattern is broken, a trader would want to keep a close eye on the consolidation pattern that is forming at the handle.

Remember, a consolidation pattern indicates to traders that there are price “wars” occurring.

When breakout traders are searching for these patterns, once a direction is taken it indicates that is the new trend for the stock to go in.

So if you are looking for the consolidation to result in higher prices after the cup and handle, seeing price below the handle is signaling a failure in the pattern.  This now indicates that the stock is looking to head lower.

Some traders recommend placing stop orders right beneath the upper third (or half) of the cup for the best risk to reward levels. 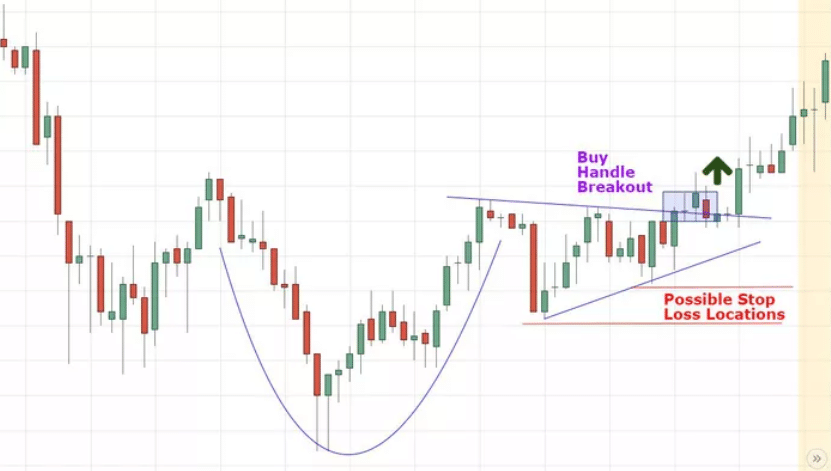 Pro Tip: The best way to know if the pattern is invalidated is when the Cup’s low is broken, not the handle. This ensures that you remain in the trade if the pattern changes into a double bottom and continues higher afterward. Not recommended for new traders, the risk to reward level is the worst at this stop location and may result in “doubling down” on your position.

Picking a The Best Exit

There are two types of exits a Cup and Handle trader can utilize on the position.

There are two types of target exits.

In order to determine the target, a trader would want to first calculate the height of the cup.

Next, you would take that value and add it to the breakout point on the handle.

In the event that the left side is smaller than the right side (or vise-Versa), it’s best to take the shorter of the two sides in your calculations.

Another method for identifying target prices after a breakout is using a Fibonacci extension indicator. You would want to draw the extension from the cup’s low to the high on the right of the cup, and connect it to the low of the handle. The best location for a target to be placed is at between the 1 and 1.618 levels

You can see that the price broke out from the upper resistance of the handle, and traded almost exactly to the 1.00 Fib level before retracing back down.

Another way to exit the trade is to let the markets take you out instead of removing yourself from the trade.

This is favored over targets by many traders who want to give their trade a shot to win big when taking a swing position.

If the breakout is confirmed and momentum is on your side, a trader can reap serious rewards by following the trend and letting it run instead of taking a target exit.

Pro Tip: There are pros and cons to both exits used, and one is not better than the other. Use what fits your style and risk tolerances the best to keep you profitable and consistent in your trading.

So there you have it, a reversal pattern that you can add to your toolbox and begin using.

What you learned in the Cup and Handle strategy guide:

So what do you think of the Cup and Handle pattern?