How The World’s Largest Banks Operate

In my last message, I gave you an inside look at how dark pools work and a taste of how I use that information to my advantage. If you missed it, click here for Dark Pools, Friend or Foe.

Today, I want to show you EXACTLY how dark pools work, and why the information hidden within them is so powerful.

Why Banks Use Dark Pools

For those of you who don’t know, dark pools are private venues that only elite traders and investors have access to.

It’s no wonder why dark pools have become so popular amongst the Wall Street “insiders”.

Dark pools are not transparent… and it’s not like your traditional exchange. When you send an order on NYSE or Nasdaq (these are considered “lit” exchanges), all the information is shown… it’s there for the public to see. The price and amount of shares you want to buy or sell are visible.

I’m not naive, so I know there is a lot of information these banks want to hide… and they don’t want the competition to figure out why they’re sizing up in a position.

The pros use dark pools because it allows them to operate in the shadows. Not only that, but they could automate their trading and use high-frequency trading (HFT)… so they could sit back and go about their days.

But the thing is, these fat cats don’t know there is technology out there following their every move, and oftentimes… it detects their massive trades — and many times, it’s AHEAD of a major headline.

That’s right, with the rise of dark pool trading activity… there’s been a bevy of perfectly timed trades.

There Are Hidden Clues In Dark Pool Information

We all know Wall Street “insiders” place well-informed bets using proprietary information all the time… I’m talking about non-public information that traders like you and I are not privy to.

So they do everything in their power to hide their trades… and dark pools have been one of the “best” places, so they think.

What the well-informed elite probably don’t know is even though their trades are anonymous on dark pools, traders can still figure out their every move. While it’s true we don’t know exactly who’s behind the massive block orders going off in dark pools every single day…

We can still figure out how many shares they want to buy and at what price.

Let me show you exactly how I use dark pool information to my advantage.

Someone was loading the boat with BBBY shares… this trade went off ahead of Black Friday and the “smart money” probably thought it was going to run up into the major holiday… or they may have had access to non-public information. 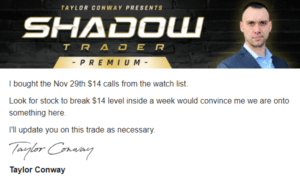 I use the options market to trade off dark pool information because they offer massive profit potential in the shortest time possible.

Just a few hours after I placed the trade… the options exploded and I locked in an 83% return on half of my position.

Now, I wanted to hold onto the rest to try to juice some extra returns because it was pretty much a freeroll for me. Worst case scenario, I would stop out and still lock in a massive winner… 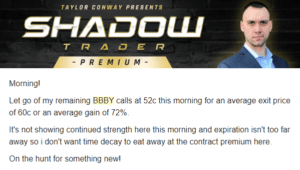 As you can see, dark pools actually are actually somewhat transparent, and there are a lot of clues embedded in them.

This isn’t a one-off… I find dark pool information ALL the time and directly profit from it.

I carefully sift through the thousands of block orders going off every day… and find a handful to trade.

Let me show you another example.

I spotted a 499K share dark pool trade in Tripadvisor Inc. (TRIP) that hit the market at $31.63. There was bullish activity, and the chart in TRIP indicated it could run higher. 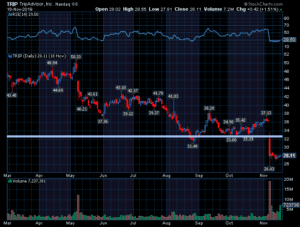 TRIP could’ve formed a bullish engulfing candle above $32.50… and if it broke above that, we would’ve been in business.

I decided to purchase TRIP $32.50 calls expiring in December… and the very next day, TRIP got a nice pop… and I decided to take most of my position off, and hold onto some to see what was up in the name.

I sold the remaining calls for a small win on the trade overall.

Knowing what you know now… imagine you were able to spot these massive block trades all the time… how much easier would trading be for you?

You should have a basic understanding of how dark pools trade and why I love using the information to generate massive returns. Look out for my next email because it’s going to be jam-packed with the techniques I used to become a 7-figure trader.