The set-up: The dollar had a breakdown in a solid uptrend on Tuesday, with a solid close below the support line. From a purely technical standpoint, that makes it time to short the dollar. 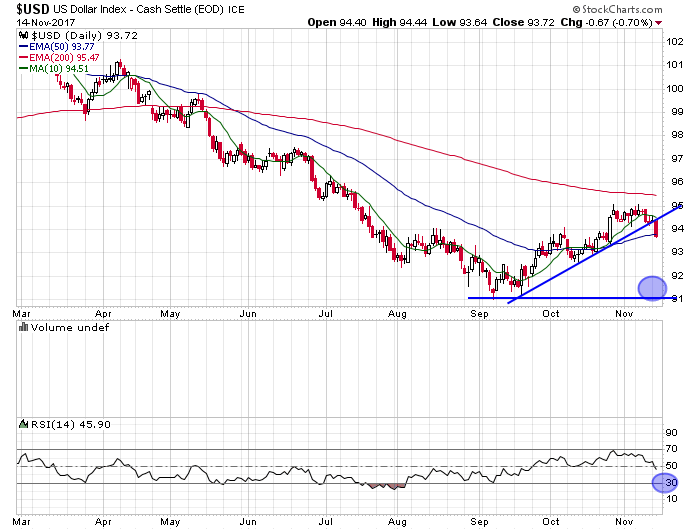 The Relative Strength index is neutral here, the dollar isn’t in oversold territory, and the obvious breaking of the recent uptrend should mean that we are starting a new short-term downtrend, which would take the dollar back to about 91. I’d set a stop-loss back at the support line, which means 94.50, giving the trade a potential three-point gain with a 50-cent risk, the kind of trade I’m always willing to take a chance on.

The play: I use indexes and ETFs to inform my day trades, not as something I trade myself, but the PowerShares DB US Dollar Bearsih ETF (UDN) would seem to be the obvious choice here.

Keith Kern has been a full-time day-trader for 17 years; he moderates the Lightning Alerts chat room at BiotechBreakouts.com. He does not trade in indexes or ETFs at all – focusing his day-trades on individual stocks – but analyzes the market from the top down looking for his daily trading ideas. At the time this commentary was published on Raging Bull.com, he was 100 percent in cash.