U.S. stocks will stop trading here shortly, and markets will be closed tomorrow, but today I wanted to give you a rundown on two ways to bet bearishly with options… and when to know which trade to put on.

As most of you know, I trade credit spreads in Weekly Windfalls — the “casino strategy” that has a 70% win rate.

So Jay, you ask — why would I buy your Jason Bond All Access bundle if you already trade bearishly in Weekly Windfalls?

In short, the answer is this: we’ve been in a bull market forever, but I feel the scales could tip in 2020.

And I want to be absolutely prepared when it turns — that means having the ability to put on different types of option trades, especially on the bearish side, depending on my outlook for a specific stock or sector.

I want to be able to pivot seamlessly in 2020, and have my first year of $1 million in trading profits, with a handful of trading strategies in my holster.

Over the weekend, I outlined one of the “smoke signals” I’ll be using to identify bearish trading ideas in 2020 — the descending triangle pattern.

I also gave a brief rundown of the differences between putting on a bearish credit spread and buying a put option, but I’d like to take a deeper dive today, and give you a path to figuring out which trade is right for you.

The first question you need to ask yourself is…

Are You Afraid of Spreads? 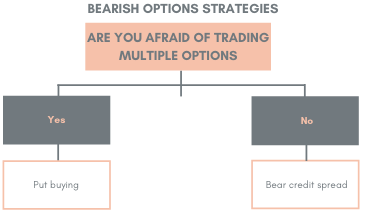 Some people find trading option spreads intimidating. If you’re one of those people, put buying is the obvious choice for your bearish trades.

However, keep in mind that you can trade these spreads with as little as $2,000 in your account.

And my paid Weekly Windfalls subscribers are encouraged to watch me trade in real-time before jumping in, so don’t feel pressured to start trading yourself until you’re 100% ready.

I should also note that subscribers of my bundle — Jason Bond All Access, which features all three of my main services — will receive my MasterClass FREE.

I’ll be hosting these training sessions weekly starting in early January, and I am PUMPED to get back to teaching.

That said, the next question is…

What is Your Outlook for the Stock? 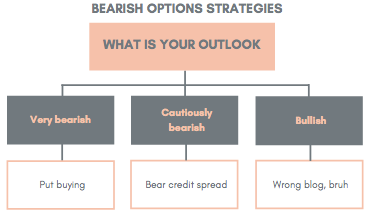 If your outlook is “very bearish,” you should consider buying put options, like I do in Smoke Signals.

To calculate the breakeven on a put purchase, you simply subtract the premium paid from the strike of the option.

Meanwhile, breakeven on a bear callspread is calculated by adding the net credit from the trade to the sold call strike.

My spread would make at least a little money if XYZ remained below $100.75 (sold 100-strike call plus 75-cent credit) during the options’ lifetime.

TL;DR: It’s easier to profit from a credit spread than a put purchase, because the former requires a smaller — and sometimes no — downside move from the stock. 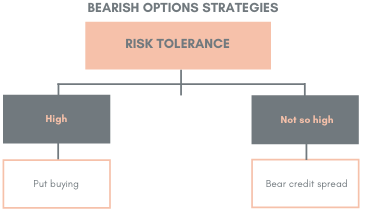 The most you can lose on a put purchase is the premium paid for the option.

The most you can lose on a bear credit spread is the difference between the bought and sold call strikes, minus the premium paid at initiation.

That loss would incur if XYZ was above $102.50 — the bought call strike — at options expiration.

In other words, generally speaking, your maximum risk is higher with a put purchase than a credit spread, assuming your strikes and option series are about the same.

How Are Option Prices? 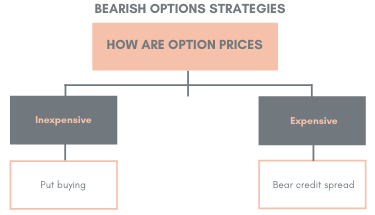 When prices are running high on anything, where would you rather be — on the buyers’ side or the sellers’?

No one wants to pay inflated prices for anything, be that options, food, 2020 Cincinnati Bengals tickets…

If option prices are running high — often determined by implied volatility — it favors you to be on the selling side.

That means initiating a credit spread, where you get to pocket at least some of the premium when you’re right about the stock move.

When option prices are running lower, buying a put might work out better for bears — lower prices not only means an easier breakeven but a lower maximum risk, too.

How Much Money Are You Trying to Make? 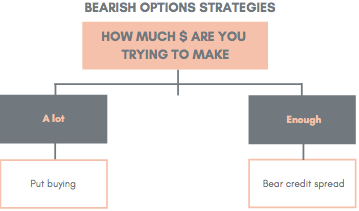 The maximum potential reward for a credit spread is the actual credit received when you open the trade.

So, going back to our XYZ example, if the 100/102.50-strike call spread is established for a net premium of 75 cents, that’s the most you can possibly make.

That happens if both calls finish out of the money (OTM), so in that example, it’d be if XYZ shares ended below $100 (the sold call strike) when the options expired.

Of course, most spreads don’t last the entire lifetime of the options — they can be closed at any point before that.

Meanwhile, the profit on the put depends on how far the stock falls beneath breakeven in the option’s lifetime.

How Much Time for Your Move to Play Out? 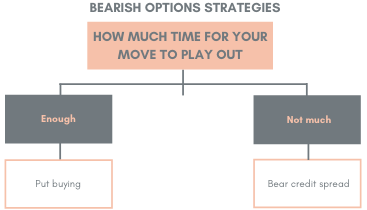 Time decay — or the rate at which an option loses value as expiration approaches — is an option buyer’s enemy.

Because the closer an option is to expiring, the less time there is for the expected stock move to play out.

Therefore, it’s safe to say that time decay is the friend of an option seller, which includes traders who put on credit spreads.

So, if you expect Stock XYZ to make a huge move lower, but not necessarily in the next few days, it might behoove you to buy a put option a couple months out.

Of course, you’re going to pay more for these options, due to their added time value, as compared to options with a shorter life span.

That means your breakeven will be lower on the trade, and your maximum risk will be higher.

If you expect the stock to stagnate or move lower in a very short time frame, and option prices are worth the risk/reward ratio, you might do better putting on a short-term credit spread and capitalizing on time decay.