While I’m not aggressively trading this week, that doesn’t mean I’m not getting geared up to kick ass in 2020.

In fact, I’m expecting to have a banner year in 2020, between my three primary services: Weekly Windfalls, Jason Bond Picks, and my newest service, Smoke Signals.

Plus, I’ll throw in a FREE ticket toRagingBull’s first-ever Trader’s Summit in Orlando this February…

I’m attending (along with most of our other gurus, not to mention a REALLY cool surprise guest) and hope to see my subscribers there!

So, with preparation being the name of the game over the next few sessions, I thought I’d give a rundown of one popular stock market indicator you’ll be hearing about soon… And outline a few sectors on my short-term radar.

For those who don’t know, the “January Barometer” is the theory that however stocks perform in January sets the tone for the rest of the year.

The thought behind this is that positive momentum to start the year can continue through the subsequent 11 months, as investors attempt to get in on the action. 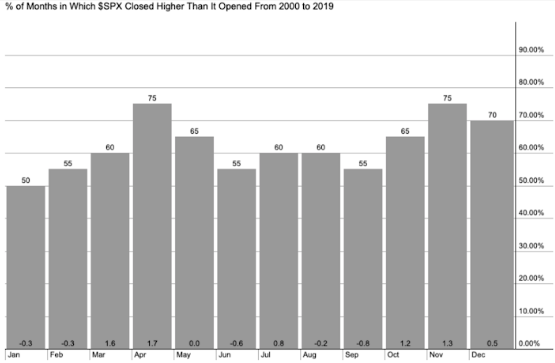 During the current bull market, though (since 2009), the index has been positive in January 55% of the time — still the smallest win rate outside of August (positive just 45% of the time). 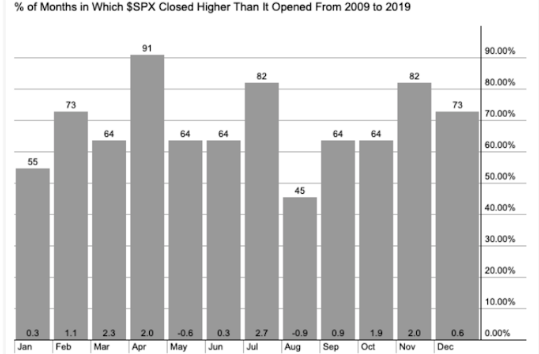 However, I’m not 100% convinced I buy into the “bad January, bad trading year” methodology.

Below I isolated years with the worst January returns during the current bull market — 2010, 2014, and 2016. As you can see by the bottom three lines, stocks still went on to finish the year higher.

I also included 2018, which saw a strong January… but finished abysmally. 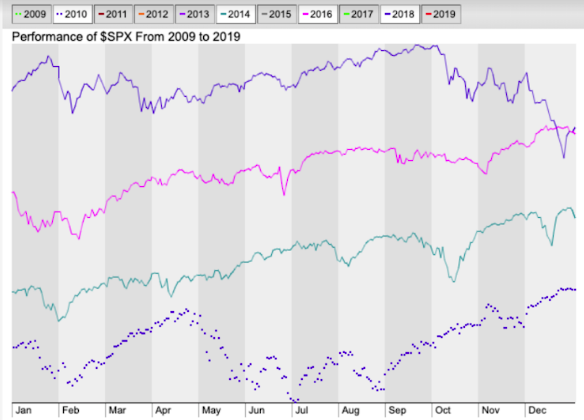 Drilling down into some sectors, healthcare has been a notable outperformer in the first month of the year. The Health Care Select Sector SPDR ETF (XLV) beat the S&P 500 70% of the time in January, looking back 20 years. 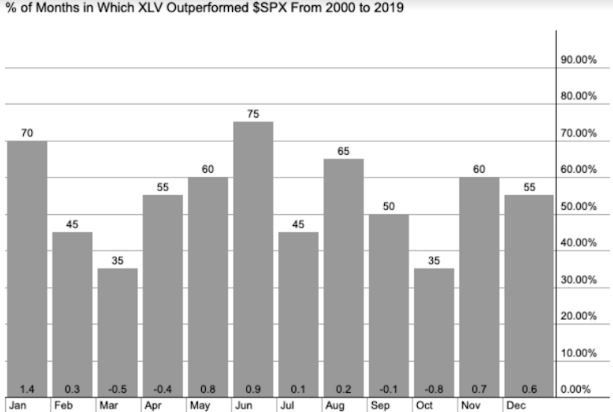 This sector will be in focus in mid-January, too, with help from the annual J.P. Morgan Healthcare Conference.

However, it should be noted that XLV has been overbought — with a 14-day Relative Strength Index (RSI) above 70 — for most of the past few weeks. As such, I would be cautious about jumping on healthcare stocks out of the gate in 2020.

Meanwhile, the Communications Select Sector SPDR ETF (XLC) — which includes FAANG names Facebook (FB) and Google parent Alphabet (GOOGL) among its top holdings — has outperformed the SPX 100% of the time in January over the past 10 years. 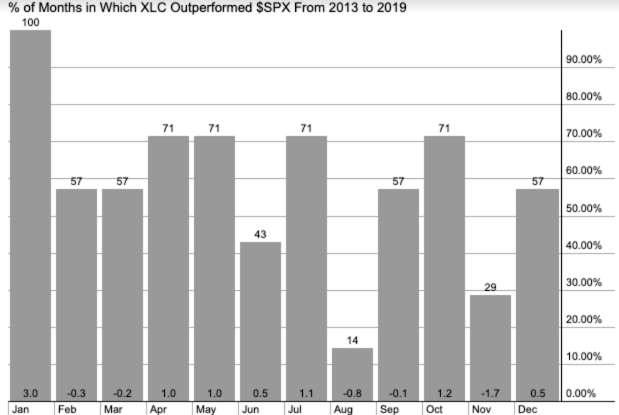 My longer-term outlook for FAANG stocks remains uncertain, though, as these companies have been heavily targeted for regulatory scrutiny… and more could be on the way.

In fact, some presidential candidates have even discussed breaking up big tech companies.

So, I think once this bull market finally does peter out — and it most certainly will (which is why I’m getting ready now), I won’t be surprised if big tech leads the decline.

The Consumer Staples Select Sector SPDR Fund (XLP) has outperformed the broader stock market just 33% of the time in January since 2011. It’s also averaged a monthly loss of 1.1%. 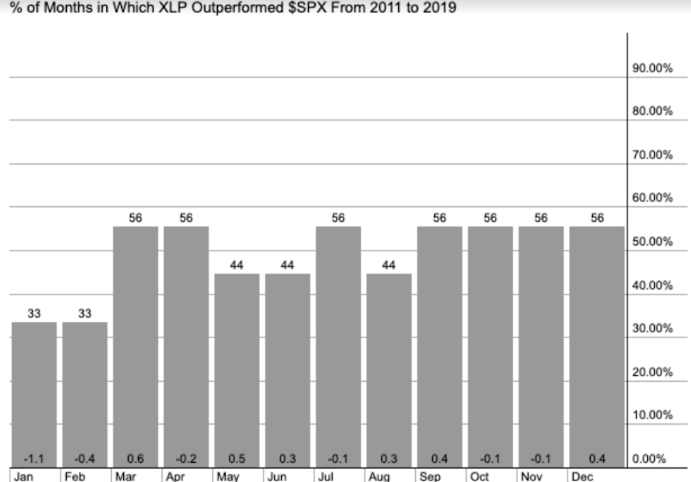 Utilities have also underperformed in January. Specifically, the Utilities Select Sector SPDR Fund (XLU)has topped the SPX in the first month of the year just 30% of the time since 2010. 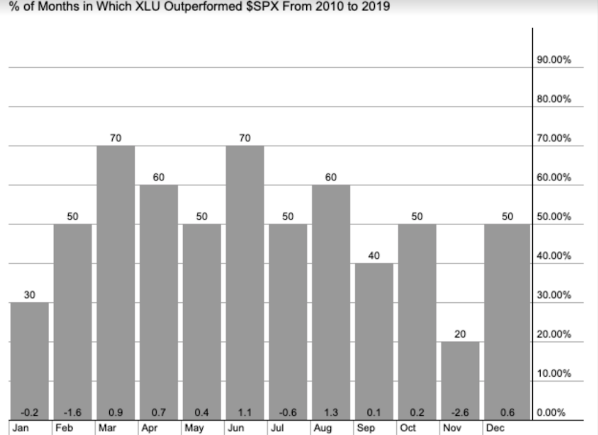 January Events on My Radar

Along with the aforementioned healthcare names, several companies will soon be reporting fourth-quarter earnings.

Over the past 20 years, the Financial Select Sector SPDR Fund (XLF) has outperformed the S&P 500 60% of the time in January. That’s tied with July and December for the ETF’s best months, historically.

Still, XLF has averaged a January loss of 0.6% over this time frame. 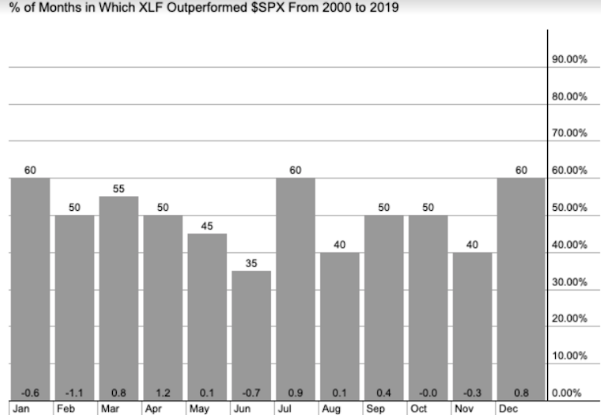 A few airlines will also be in focus after reporting earnings, including Delta Air Lines (DAL), while KB Home (KBH) is among the short list of homebuilders set to report early next month.

Outside of earnings, BREXIT could garner lots of headlines in the early part of 2020.

After several delayed deadlines and a new British Prime Minister, Brexit is now supposed to happen on Jan. 31, 2020.

One way to play the European drama is via the iShares MSCI United Kingdom ETF (EWU).

However, if you believe that past is usually prologue, remember that this fund has outperformed the S&P just 25% of the time in January, looking back 20 years. That’s the worst monthly win rate of the year for EWU. 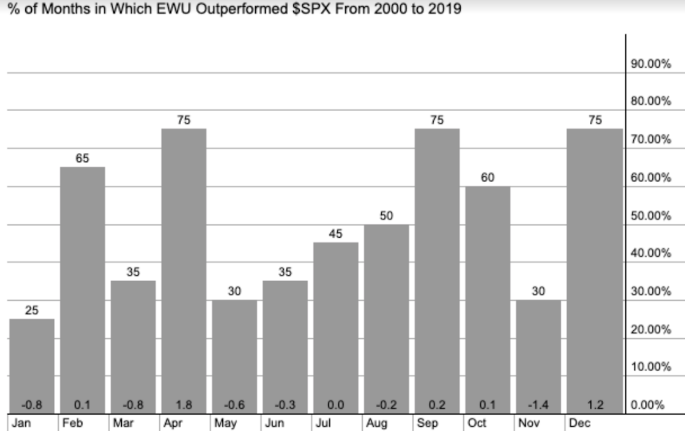 In conclusion, no one really knows what will happen on Wall Street in 2020. Will it be yet another leg to the decade-plus bull market, or is this the year the pendulum swings back to the bullish side?

Either way, I look to be PREPARED, guys and gals.