A Balanced Attack Plan for this Market

An indecisive stock market is tricky to trade. And after several failed attempts at a new all-time high— here we are again in no man’s land.

I could scour the headlines and try to figure out the macro news… but that’s not how I make money.

Do I park the bus and sit on cash?

No, I’m still trading… but I’m doing something a bit different.

I’m balancing out my portfolio to include long and short positions.

I feel this will best position me to profit if the market breaks out… or reverses and sells off.

And as basic as the concept of diversifying is… you’d be surprised at how many traders mess it up.

But you won’t. That’s because I’m going to teach you my do’s and don’ts for maintaining a balanced attack.

If you haven’t heard of the barbell strategy, it pretty much boils down to having bets in both directions.

In other words, no matter where the market goes… you’ll essentially be “protected”.

Think about it like this, if you’re just long stocks and don’t have any bearish positions on… what do you think will happen if the market reverses and tanks?

Obviously your trading account would get wrecked… the same goes for if you have too many bearish positions and the market rips in your face.

The simple solution here is to have trades on both sides of the market — bullish and bearish bets.

You’re probably wondering, “Kyle, how does this all work?”

Let me show you.

For a few weeks now… I’ve been quietly stalking some of Wall Street’s top options traders using a proprietary scanner.

Basically, I have the “secret formula” that allows me to decipher and find their massive options bets — long-shot bets that only the “well-informed” would place.

But the thing is… I see dozens of trades go off every day… and a lot of times, I see massive orders go off on both sides (bullish and bearish bets on stocks).

The whole idea is to manage your risk — placing small bets (in relation to your account size) in various trades to diversify your positions.

That means having as close to a 50-50 split between calls and puts.

How does it work?

Let me show you…

Basically, when I see these massive options orders go off… I put them on my watchlist. 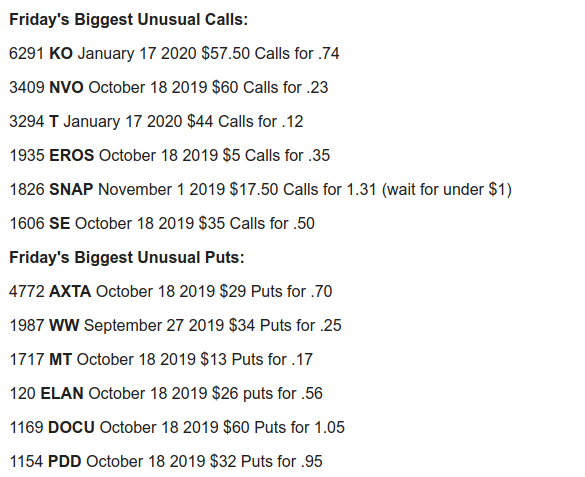 Check out some of the unusual options activity that I saw on Friday (which I think are still in play), above.

I watch to see if there’s any more activity in those trades… and if I think there’s a high probability setup, I’ll place a trade.

However, as I’m adding to my positions… I’m mindful of how many bearish and bullish bets I have.

For example, if I have a lot of puts… I know to lighten up or buy some calls to diversify. That way… if the market rips and the puts lose value, then I can still make some money with calls.

Again, the whole idea is to have trades on both sides of the market.

For example, last week I put some interesting trades on my watchlist.

One bullish and one bearish trade really stood out.

If you took those trades, you would’ve been diversified (one trade was bullish, one was bearish).

Well, that very night that the MSFT trade went off… a massive headline hit the wire and sent Microsoft soaring… and it got a boost from the market that day too.

The very next morning… shortly after the opening bell… those 36 cent options were worth around $2.80 — a whopping 668% overnight.

On the other hand, Macy’s (M) was a bearish trade… in fact, you could’ve made money on both those trades had you took them.

… and the easiest way to protect your portfolio from violent moves is to keep a balanced portfolio.