Float with the butterfly

Think you have what it takes to soar with the butterfly trade? Not so fast kemosabe. This strategy isn’t meant for the weak-willed.

Yes, the cute, cuddly caterpillars encase themselves in cocoons to become beautiful winged insects. But take them for granted, and they will destroy our account and your city!

Technically it was Mothra, but it’s a fictional creature, so unless you’re a member of Weekly Money Multiplier,  who are you to judge?

I’ve learned how to net big profits on these trades. Just the other week, I played two stocks into options expiration for quick gains. 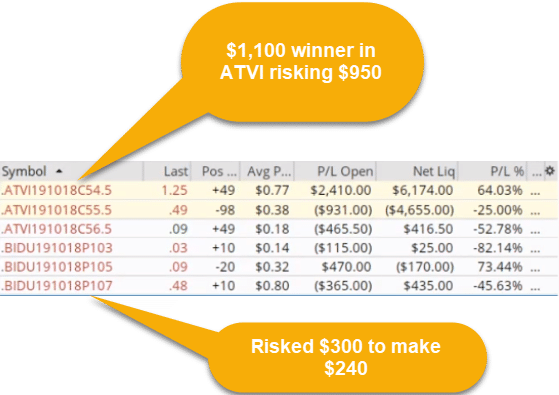 I showed Weekly Money Multiplier Members how I set up and exited trades in BIDU and ATVI during options expiration week!

These lovely trades of nature pay quite handsomely and have a nice risk/reward ratio, but I still find people who don’t understand their true power.

Let me start by explaining these beautiful trades.

Going back to my trade in BIDU, my setup included:

The payout graph for a butterfly put trade looks like the following: 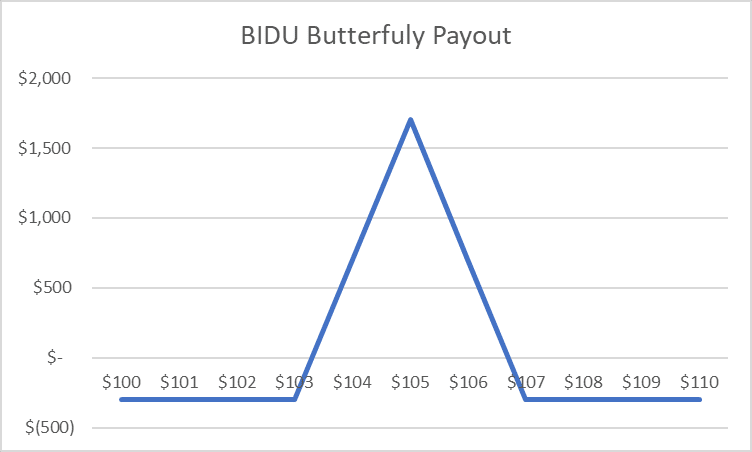 The premium paid is the amount you receive from selling the at-the-money puts less buying the other two options. This is also the maximum you can lose.

The maximum payout comes from the difference between the strike prices of the in-the-money put, and the at-the-money put less the premium paid.

In this case, you’re looking at a maximum profit of:

You’ll notice there are two breakeven points. Those occur at the strike price plus or minus the premium (depending on which strike you’re looking at).

These are awesome trades with high payouts. When you set them upright, the risk to reward is astounding! In this case, I had a risk of $300 for a maximum payout of $1,700 which has a 1 to 5.67 risk to reward ratio.

However, they only really pay outright at expiration so timing is critical.

One of the biggest mistakes traders make is putting butterflies on way in advance of expiration. There’s absolutely no reason to do this. Time decay doesn’t work for you in this trade until you get right up against expiration.

One way I do this is by looking at open interest. Check out the call option chain below: 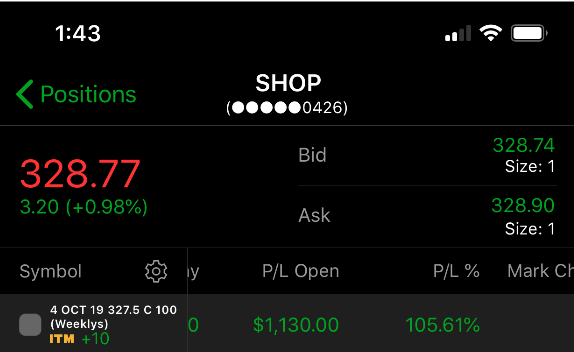 You’ll notice that the open interest is pretty high at the $123-$125 strike range. This means execution shouldn’t be an issue because there is a fair amount of liquidity there.

The next thing I do is look to the charts. I want to see stocks that recently found support or resistance rather than stocks that are trending up or down. That makes them more likely to stay range bound and then take off.

You can see how BIDU traded in a pretty tight range off the big $100 level. 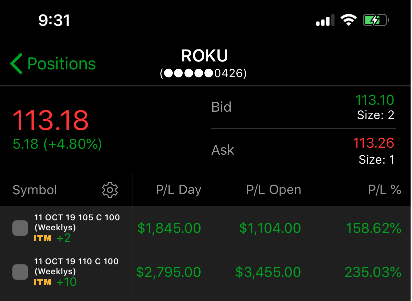 So I had the probabilities on my side that at some point the trade would become profitable during options expiration week. That’s where I stalked my exit.

I would love these trades to always expire at full profit. However, even getting double what you put in is a great return.

But you know what 100% is possible? Learning trades like these at Weekly Money Multiplier. I can make you a better trader today.