How To Manage Risk When Day Trading

If there’s one thing I’ve been telling Daily Profit Machine members over and over again the past few months, it’s that this is a day traders’ market.

I’ve been saying it so much, they’re probably sick of hearing it! In fact, on Monday, just to mix things up a bit, I referred to it as a “hibachi market.”

In all seriousness, the current trading environment is tricky to navigate, to say the least. Some days it borders on downright treacherous. Of course, the flip side of this volatility is that it also presents ample trading opportunities… for those who knowhow to navigate it.

One way to reduce risk in a market as news-driven as this one is to avoid holding positions overnight or through the weekend. In other words, you day trade.

But day trading comes with its own risks, so today I want to talk about how traders can mitigate those risks by offering some tips.

I rely heavily on support and resistance levels to guide my trading.

When a stock finds support at a certain level, that is a signal that there is demand for shares at that price point. So, support areas often make for good entry points for bullish trades.

Resistance areas, on the other hand, are price points where the stock has stalled and the bears have been able to push shares back down. That means these levels are often ideal spots to take profits.

To illustrate my point, let’s take a look at the chart of SPY, the ETF that tracks the S&P 500 andmy all-time favorite security to trade. 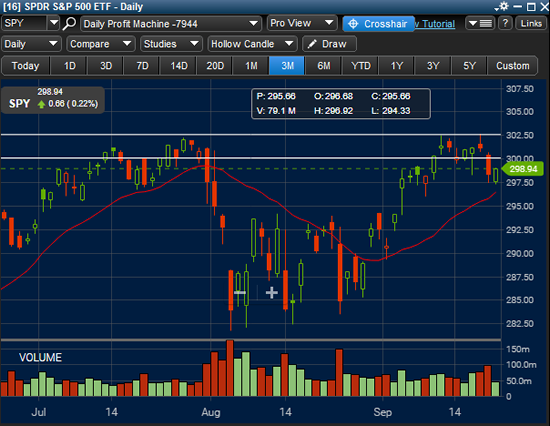 Let’s go through the three lines I’ve marked on the chart one by one, beginning with the higher of the two white lines at $302.50.

You can see how SPY hit this level numerous times in the past few months, turning down from it each time. That is the textbook definition of a resistance level. And the more times a security hits a certain level without being able to break through it, the stronger that level is considered to be.

So, if I were making a bullish trade on SPY and the ETF ran higher, I would look to exit near this level in case it once again proved hard to overcome. A run-up to this level would also be a good place for traders to enter a bearish trade.

Now, let’s talk about the red support line, which represents the 20-day moving average. Moving averages are meant to smooth out past price data, so they are constantly moving, but currently, SPY’s 20-day is sitting around $296.50.

So, if I entered a bearish trade in SPY and it fell down toward the 20-day moving average, I would look to exit to avoid watching my profits disappear if the ETF bounced off that level. Or, if shares were trading near this point, I might look to enter a bullish trades.

Finally, we have the lower of the two white lines, which is SPY $300. This round number represents a very important psychological inflection point. When SPY is above $300, it represents support, and when SPY is below it, it represents resistance.

Knowing this, traders can use this level to time short-term trades for outstanding profits.

Day Trading Tip #2: Have a trading plan, and stick to it.

Another way to mitigate risk and be more consistent is to have a trading plan.

I usually look for a technical trigger to enter a trade. Specifically, I use…

But even before you enter the trade, I recommend that you have a solid plan for where you plan to take profit and where you’ll exit a trade (for a profit or loss).

You don’t want to make those decisions on the fly… that’s a recipe for panicking and racking up losses. If that sounds like you, or you have no trading plan to speak of, then starting a trading journal is a good start.

In the journal, record every trade you make, why you made it and your plan for the trade.

However, it doesn’t just end there… you actually have to go back and review your trades to find a pattern.

By closely studying your results, logging exactly what is working for you and what isn’t, you’ll be able to refine your trading plan… and ensure you’re not making the same mistakes over and over again.

Day Trading Tip #3: Use options rather than stocks.

Options have numerous benefits over stocks. Two of the biggest ones are that they are less expensive than equities and they provide immense leverage. In other words, you can spend less money to make much higher percentage returns than you would from stocks alone, thereby reducing your capital at risk.

For example, let’s say you thought SPY was headed higher. As an investor, you might purchase shares, which are currently trading around $298. If you purchased 100 shares of the ETF at $298, you would spend $29,800.

Now, if you wanted to purchase a call option on SPY instead, you might pay just a few hundred dollars to control the same 100 shares, meaning you have significantly less capital at risk.

And that same $2 move in SPY could translate into a double- or even triple-digit return on the call option — often within a very short amount of time.

So, we’ve covered a few things today that can greatly reduce your risk when day trading. But if you’re new to the game — or even if you’re not and you simply want a major leg up — I have one final tip for you…

Bonus Day Trading Tip: Have a pro on your side.

When it comes to day trading, there’s no substitute for having an experienced professional on your side.

I help thousands of traders just like you generate consistent day trading profits with my Trade Of The Day.

The Trade Of The Day represents the single option trade I believe is the best bet for your money on a given day. It’s always on SPY, and I deliver it to traders 30 minutes prior to the market open each day.

In addition to the No. 1 option for your trading day (which includes the exact strike, expiration date and, of course, whether it is a put or call option), I tell traders key support and resistance levels to watch. I also discuss entry points, targets and stop losses — everything you need to begin day trading successfully.

If you’re ready to get serious about day trading, join me now.