With just 2 days left in 2019, I took the time out this weekend to scour through the best unusual options activity trades that I spotted… and I came across a monster winner — one I think we could all learn from.

Back in October, LVMH — the parent company of Louis Vuitton offered to buy out Tiffany’s (TIF) for $14.5B.

At the time, if you were up bright and early to catch that headline, you would’ve been lucky to make a few percentage points.

But the thing is… we all know there are massive hedge funds out there and Wall Street “insiders” who have access to non-public information.

We’ve all seen character portrayals of Wall Street’s greediest traders who place massive bets on insider information… and it’s really not that far from the truth.

An options trader(s) grabbed hundreds of contracts in TIF for under $2 a piece… and just a few days later, those call options were up more than 1,500%!

It’s quite clear we’re at a disadvantage.

However, I’ve actually figured out a way to level the playing field with my Dollar Ace system… and legally take advantage of these insiders’ every move.

Let me set the stage for you and show you how you can spot these plays… all the time.

Prior to the LVMH takeover announcement with Tiffany’s (TIF), the stock was trading about $98.

However, there was some unusual options activity (UOA) in TIF.

There were actually 3 trades that looked interesting:

Those options were all purchased AHEAD of the headline.

So why were they so interesting at the time?

The “insiders” threw down a $41K bet… followed by a $51K bet, just over a minute later in the options expiring on Nov. 29th. That’s a pretty sizable bet there.

Here’s the kicker — there was no open interest in those call options… and it was a clear signal those options buyers must’ve known something.

… instead, they have a clear definable edge.

Just a few days after those call buyers swept those options… they were sitting pretty. 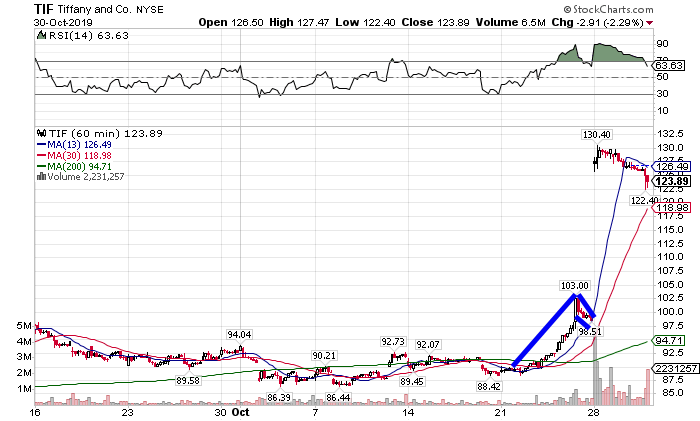 Tiffany’s gapped up around 30 points higher after the news hit the wire… and those options were worth more than $22.

The most interesting part was the fact that the offer price came out to be around $120.

The thing is… there are bets like this going off in the options market every single trading day. The best part: we can legally profit from the Wall Street whales’ best ideas.

You Can Profit Off The Insiders’ Every Move

Since the trade went off ahead of the holiday week… I decided to remain patient because whacky things could happen. The day after Christmas, I actually purchased those puts for a cheaper price. 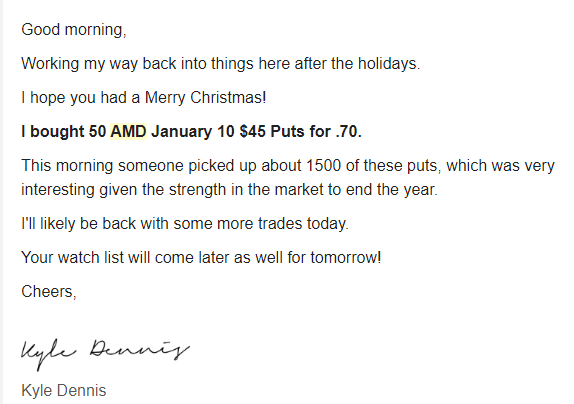 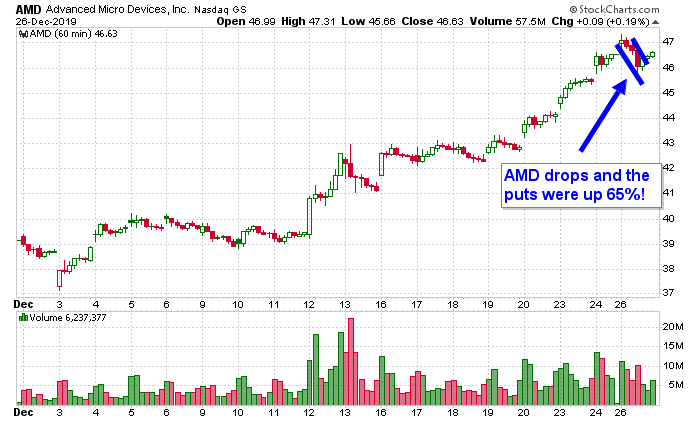 … and guess what those puts did? 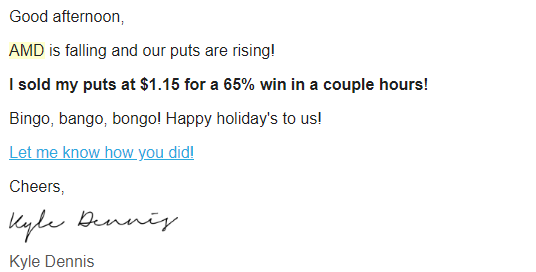 As 2019 comes to a close, I’ve honed in on my skills at finding these massive winners… andI’m expecting more Dollar Ace winners in 2020, who knows… maybe I’ll grab a few “10 bagger” trades.

However, I’m not selfish like these Wall Street insiders, and I want to provide you with my Dollar Ace service at the LOWEST price ever.

Come 2020, this is one profit bucket that I think could take you to the next level.

What are you waiting for?

Many of my clients have found success with Dollar Ace

AMD was best trade of the month for me, didn’t expect that at all with that chart. ~ Ben E.

Just sold AMD from my phone during lunch, not perfect exit but still got 53% out of it. Awesome trade! ~ Matt L. 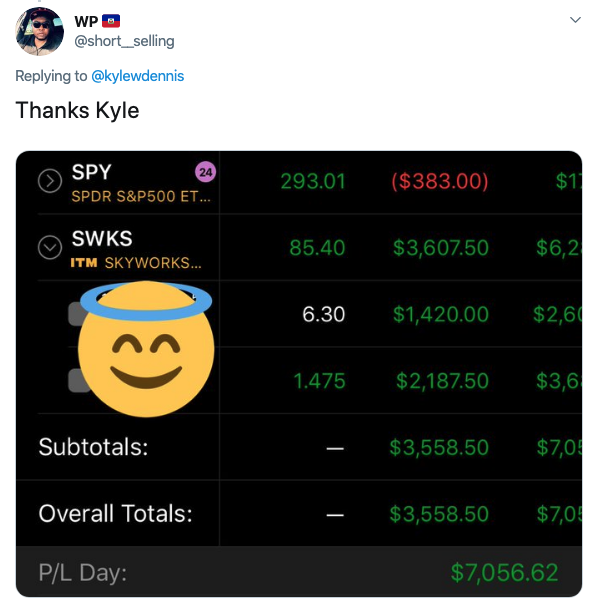 Click here to take advantage of this exclusive pricing.