Wow… that was quick.

It took about 24 hours for Kyle Dennis to close a 100% and 50% winner using his latest breakthrough strategy – Dollar Ace.

I’m not surprised. In fact, it’s what I expected and why I’ve been telling you about it so much recently.

Kyle’s newly-developed strategy has quickly become his #1 money-making tool. And that’s saying something, because he’s generated over $7 million in trading profits over the past few years.

The way his options strategy works is simple, intuitive and lucrative…

You see, Wall St. insiders and large, institutional buyers (the “smart” money) often look to options to capitalize on their high-conviction, speculative trades.

If you were confident a stock was going to make a massive move higher or lower, wouldn’t you want to take advantage of the leverage options provide while minimizing risk?

A few times a day, these insiders put millions of dollars on the line on some stock or ETF options.

To everyday investors, these trades might look like absurd bets, requiring a stock or ETF to make a large upside or downside move in just a few days for the options to pay off at all.

But these aren’t wild bets.

Wall St. shops don’t stay in business by losing money. More often than not, they know something none else does, and those “absurd” bets turn into a windfall.

That’s where Kyle’s strategy comes into play… with his proprietary technology, Kyle is able to spot these massive options trades hitting the tape.

Then he takes it one step further.

You see, there’s nothing illegal or unethical in following insiders and placing the exact same trade. In fact, it can be extremely lucrative.

Let me show you what I mean…

Someone Knew Something: YELP & GOLD

Shares were trading around $32 when an insider placed a massive bet that YELP would move higher.

The strategy uncovered that 1,000+ calls with strike prices in the $32 – $33 range had been purchased. What made the trade especially bold is that they expire this Friday.

What made that option so “risky?”

Because if YELP fell and shares were trading below the strike price on Friday, the calls would be totally worthless.

In other words, the insider that bought the calls was extremely confident that YELP would defy the market’s recent trend and move higher.

Here’s a look at just one of the insider bets on YELP.

Of course, Kyle was seeing all this activity in real-time and alerted his Dollar Ace members. And just like the insider, Kyle and his members were able to make a killing off YELP calls. 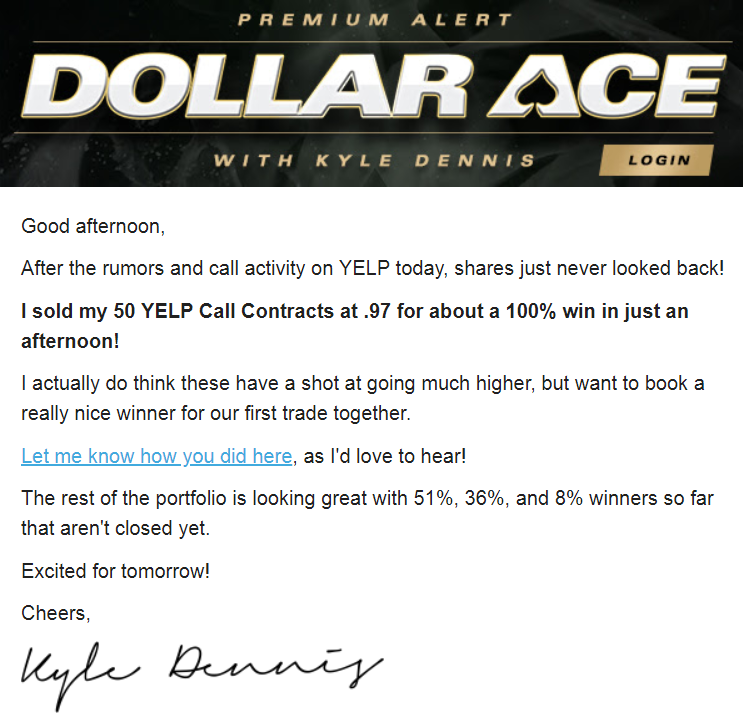 Boom! Kyle was able to close the trade he alerted for a 100% gain in less than a day!

That’s the power of the strategy he developed, which can find 1-4 of these types of trades daily.

Shares moved higher on Tuesday and kept going on Wednesday. And less than 24 hours later, Kyle sold his GOLD calls for about a 50% win!

Are You Ready To Start Making Money With Kyle?

If you haven’t yet, done so yet and are ready to start making money alongside Kyle, I recommend you join him now.

This is your last chance to lock-in the lowest price we’ll offer on Dollar Ace.

Do it now, or regret it later.