How To Trade This Market, Critical Spy Levels + Top Trades

The Dow plummeted over 600 points yesterday as tensions continue to rise in the China/US trade wars. This continues to be a headline-driven market, so get ready for a rocky ride.

On top of the negotiations, inflation and recession fears are starting to pop up. These fears seem to have some legs, and the market is taking it seriously.

Still, as long as the market doesn’t break below some key level, and earnings from large-cap tech stocks continue to grow, I’ll continue to view this pullback as an opportunity. I spoke about my market views and some of my top trading ideas on the TD Ameritrade Network yesterday, which you can watch here.

But if the back and forth moves in the market are making you nauseous, here’s some advice:

This has been paying off for me big time:

If I was only betting on the market going higher, I would be in a world of hurt only owning FIVE and PINS as you can see they are both losers.

But by “hedging my bets” I made a lot of money on the other trades. Much more than I lost on the 2 losers so far.

Don’t be a hero out there and try time this market perfectly. There is too much risk right now and some very wild moves. I will continue to actively day trade when I see a good trade setup, but other than that, I will be very selective with swing trades.

As always, if you’re a Weekly Money Multiplier member keep an eye out for my alerts and changes to my live portfolio. If you’re not a member and could use some guidance during these rocky times, you can join me here.

This is your final chance to register for Jeff Williams’ SUPERNOVA live training.

One of the biggest problems traders have is growing small accounts. But it doesn’t have to be as hard as you think, and no one is better at it than Jeff.

Register now to learn how Jeff grows small accounts by 600%-plus.

Here’s a trade that Nathan Bear sent to Weekly Money Multiplier members that he found while trading live in the Millionaire Roadmap room.

Nathan, take it away…

“I’ve been stalking YETI for a buy and I think I have a pretty solid setup lining up here.  First off, the daily chart is sitting not only a Fibonacci symmetry level, but also a retracement into the 61.8% level: 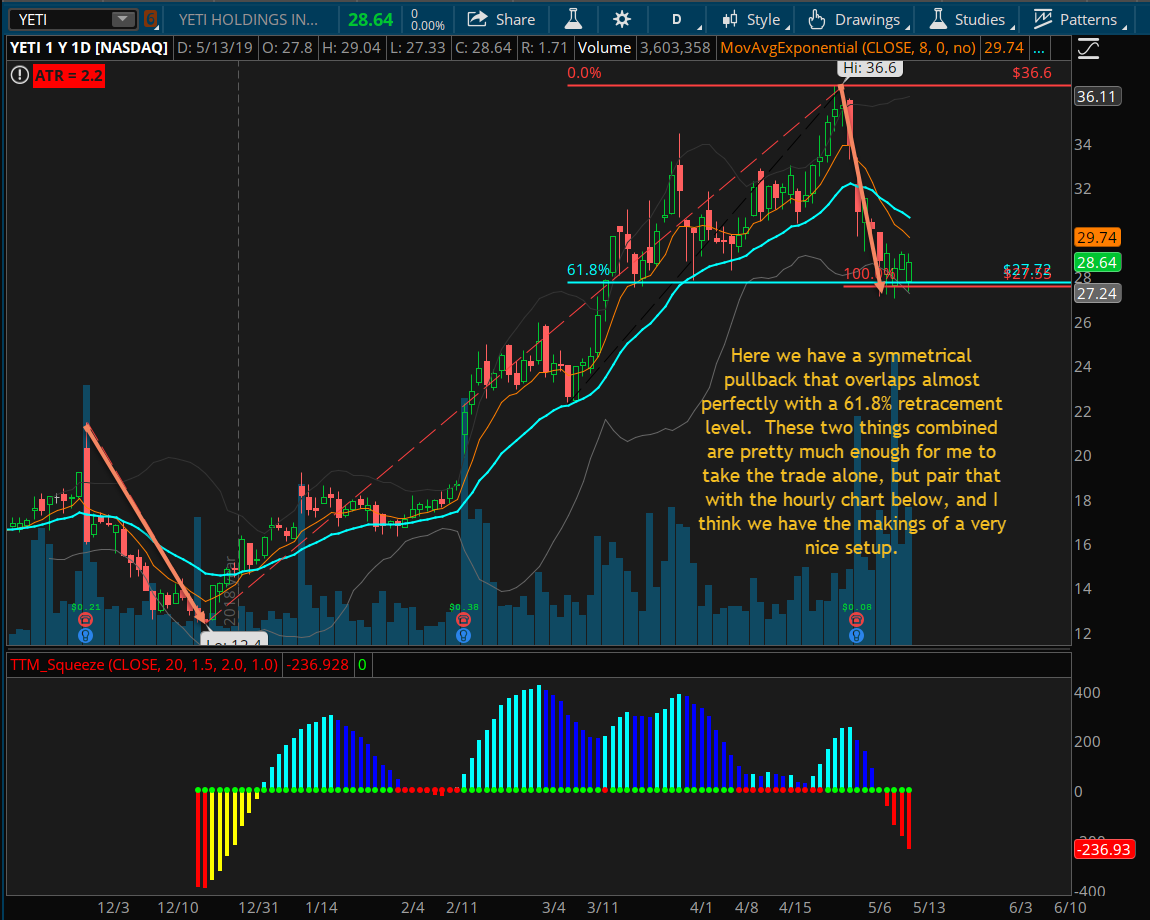 Now we can zoom in and see that as YETI has come into this Fib zone, it’s consolidating and now we’re getting a Jeff Bishop style 13/30sma upside crossover.  In addition, we have several squeezes building up that could provide us with some energy if this level holds and then the crossover follows through.

Here is the hourly chart showing the crossover: 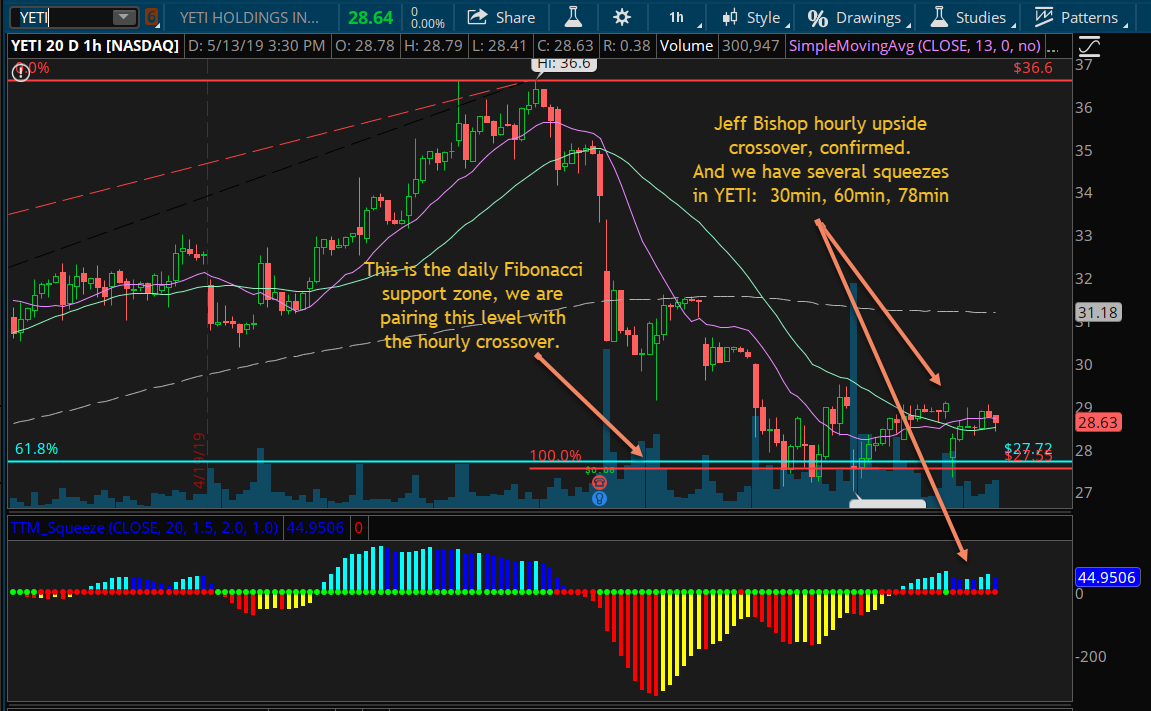 Overall the market is certainly weak and very tough to swing trade in right now.  Another reason I like YETI here is that we are buying a strong stock on a pullback with a great setup.  We can define our risk with a close under our Fib zone and then we’ll look for upside targets if the crossover carries the name higher.

Nathan streams his thinkorswim account live during market hours and is often on the mic teaching folks exactly how he finds the trades that made him a millionaire. And of course, you’ll also get access to my live training and trade alerts in the room.

Like I said, Jeff is famous in the RagingBull community for turning tiny accounts into small fortunes. He’s grown real-money accounts by 220%, 270% and 600% all while avoiding the pattern day trader rule.

And today at 8 p.m. ET he will be showing you exactly how he does it. Make sure you register now if you want to be a part of it.

Until then, here’s a sneak peak of the stocks Jeff is keeping an eye on today.

DF broke the 20-day SMA yesterday which it had failed to do in the past few months. Next up are chart highs of $2.38 and $2.45. With RSI coming out of oversold it makes this a nice potential short-term swing set up.

GDX, yes you saw this right, the gold mining ETF. Why GDX from a penny stock trader? Well, if gold makes a run, something it didn’t do in the fall during the market pull back, I’ll be looking at small cap gold stocks such as EGO, AGI, GFI, GORO, GSS etc. So I’m watching to see if GDX breaks over $21 which I feel could give us a short term push toward the 50-day SMA at $22 area and then the April high of $22.93.

Davis Martin, head trader at Daily Profit Machine, is known as “America’s #1 Pre-market Trader” for a reason.  He does what no one else does: Calls the market before it opens via his Trade of The Day alert.

Yesterday’s alert was “Buy to open SPY 5/17 282 Puts.” By 1 p.m., that option was up 90%-plus! His Trade of the Day is designed to take advantage of bullish and bearish market moves, so while most traders were in the red yesterday as the market tanked, his members were making a killing:

This week, Davis says SPY $280 will serve as strong support. Despite Monday’s big sell-off,  SPY held that level with conviction. In fact, it bounce off that level and SPY shot up $2 higher.

Davis has mentioned SPY $280 as strong resistance earlier this year. Old resistance becomes new support, and $280 clearly proved itself to be support on Monday.

If you’re interested in receiving Davis’ Trade of the Day — a daily, high-probability SPY options trade alert sent 30 minutes before the market opens, go here. His goal is to deliver double- or even triple digit gains soon after the market opens.