Maybe you think that after I sit down and write these emails, I just click ‘send’ in my message window and — poof! — it hits your inbox.

I wish I could say it was that easy. But alas, it’s simply not the case.

These emails — in addition to the exclusive IPO Payday service alerts I write — go out to many thousands of subscribers.

And it all requires a whole lot of production and coordination with the Raging Bull crew behind the scenes.

That’s right… The bunch of us are texting it up like flirting teenagers on this workplace message app, trying to get this stuff LIVE and hot off the press every single day.

Well, it just so happens that Slack is a company that DPOed (not IPOd) this past June — and it goes by the ticker symbol WORK.

The stock has deflated significantly from its initial share price, and lately, it’s facing some competition that many feel could really pop the tire…

Microsoft and it’s Teams service — Slack’s arch-rival — are rolling out an aggressive ad campaign, which will air during the NFL playoffs.

Today I want to explain why these recent concerns regarding the Slack stock could be way overblown — and why the technicals tell the real story here.

The Slack Stock May Be Deflated, But Concerns Over It’s Microsoft Rivalry Are Overblown

Microsoft definitely has the numbers edge here and the current ad campaign will only bolster that.

Nevertheless, Microsoft’s Teams app is part of the Office 365 package, which non-PC users are less inclined to use.

And, heck, even PCMag gives Slack first place among all the other business messaging apps compared based on editor ratings.

Also, plenty of businesses favor a combination of many different software like Zoom, Dropbox, Google, and Slack rather than the all-inclusive Office 365.

At least from personal experience at Raging Bull, I can say we rely on all of the above software instead of Office 365 — and I don’t see that changing anytime soon.

Slack especially has a fun, user-friendly feel, and it appeals to a lot of the younger employees at the company.

So while 91 of the Fortune 100 companies are currently using Microsoft teams, I don’t see Slack getting usurped from the niche it has carved out in young and peppy companies like us.

At the very least, the market for workplace messaging is huge, and there’s still plenty of room for two companies to occupy different parts of it.

The stock price may not suggest that at the moment — it has fallen from its initial $38.62 to its current $22.46 — but I’m eying a potential short squeeze and leg up.

Let me walk you through it…

However, WORK is a little different…

The stock has 272.67M shares floating… and that means there are nearly 50M shares short, 47.74M shares short to be exact.

Not only that, but when you see a company this massive with such a high short interest, it could catch pops real quick.

Check out the daily chart in WORK… 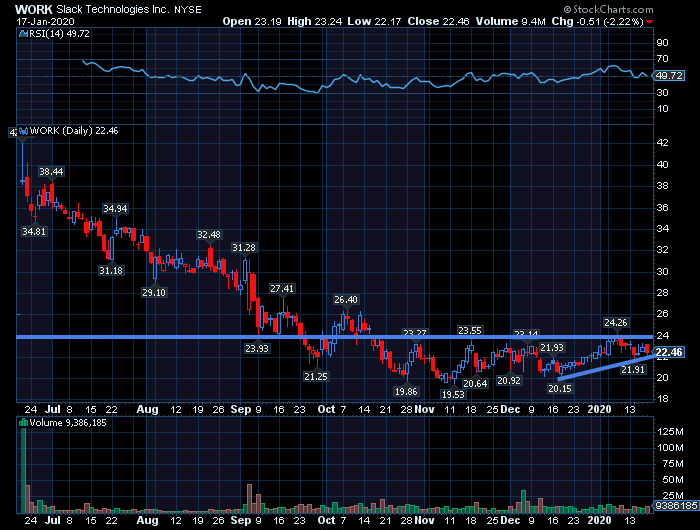 The stock found support just under the $20 level and started to catch a bounce. WORK is finally starting to form a bullish pattern (an ascending triangle) and it’s approaching a key breakout level.

It’s looking attractive at these levels, but I’ll have to wait until Tuesday if I do decide to make any moves. As always, my clients will be the first to hear about my trade if I do decide to buy calls or buy shares outright.