Prepare For This IPO Pillow Fight

Casper’s IPO will officially initiate the battle of the beds when it lines up against Purple Innovation (PRPL) to see whose product is cooler, comfier, and sexier.

No doubt, Casper has better branding and marketing — they even have a store on the boujee Abbot Kinney street in Venice, CA.

But Casper has been burning cash to get their bed-in-a-box in your home, whereas Purple Innovation offers very comparable mattress technology and actually turns a dime.

Purple Innovation is on a hot steak now too. The stock has climbed nearly 100% in the past 6 months.

But here’s the thing, folks. Sometimes birds of a feather flock together — meaning that when a stock does well, other stocks in the same or related industries also perform.

It’s called a sympathy play, and I want to explore that correlation in Casper and Purple Innovation today.

Purple Innovation’s Recent Success Could Propel Casper — Not Hurt It

If you’ve been following my recent articles on the Casper IPO lead-up, you know that there are at least a few red flags.

And it’s not just me. Scan the IPO headlines and you’ll find some downright bearish articles, warning investors against buying into the hype.

While Purple Innovation’s recent success may seem like yet another red flag for Casper, it may actually be one of the most promising signs for the impending IPO.

Purple Innovation’s growth may indicate that there’s plenty of investor interest in the market for mattress companies.

Casper hopes to capitalize on the emerging “sleep economy,” which can be thought of as a third pillar of wellness alongside exercise and nutrition. And the company claims to understand this emerging trend better than any other.

With numbers that big, there has to be room in the market for just two.

So let’s take a look at a Purple Innovation on a chart to dig into the technicals on its recent performance — and see if we can spot any clues ahead of the Casper IPO.

If You Can’t Get In On Casper, This May Be Another Play

We’ve already seen Purple Innovation (PRPL) catch a bid heading into Casper’s IPO. Right now, the stock is on the cusp of multi-year highs, and it could be a signal that Casper could be a hot IPO. 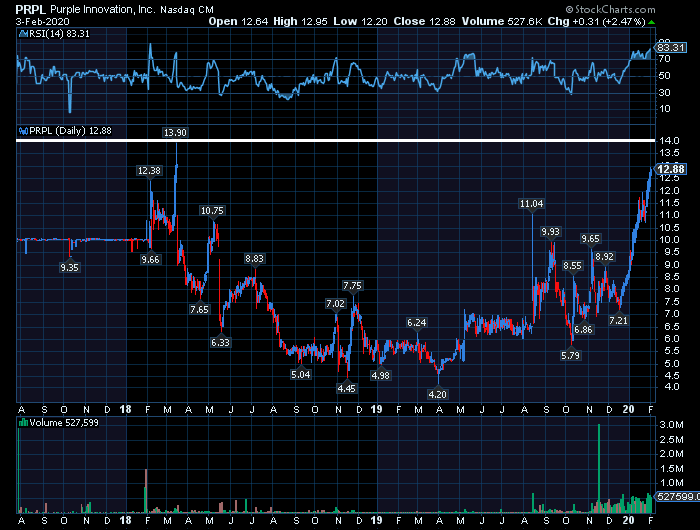 Right now, we’re still awaiting the pricing of Casper’s IPO, which goes down February 5, and there will be clues as to whether I should get into the stock or not. If there’s heavy demand, I believe the underwriters will price at the upper end of the range.

However, if there isn’t a whole lot of demand, we could see Casper price at the mid- or low-end of the range.

The thing is… it’s okay to not trade Casper the first day, I’d rather be patient and let one of my patterns arise before I take a stab.

Now, if I can’t get into Casper, PRPL would make for a great sympathy play. The stock is bouncing after it conducted a secondary offering that was priced at $7… and if we miss out on the run-up in Casper, I could see PRPL continuing higher and breaking out.

I think other IPO traders have the same thought… and since these two companies are competitors, I wouldn’t be surprised if they both move in the same direction.

I’ll be patient and wait for the pricing, and of course, I’ll watch the stock closely once it opens up for trade on February 6. If you want to know my thoughts and how I may trade either PRPL or Casper, click here to watch this exclusive training session and get a jump on one of the hottest IPOs in 2020.