What another wild week for stocks… and it’s only Wednesday.

Now, when volatility picks up and there are whipsaws in the market, I’ve noticed that momentum stocks become hotter than usual.

For example, yesterday, I spotted a large move in Nano Dimension (NNDM) and was able to lock in about 40% in the same day… 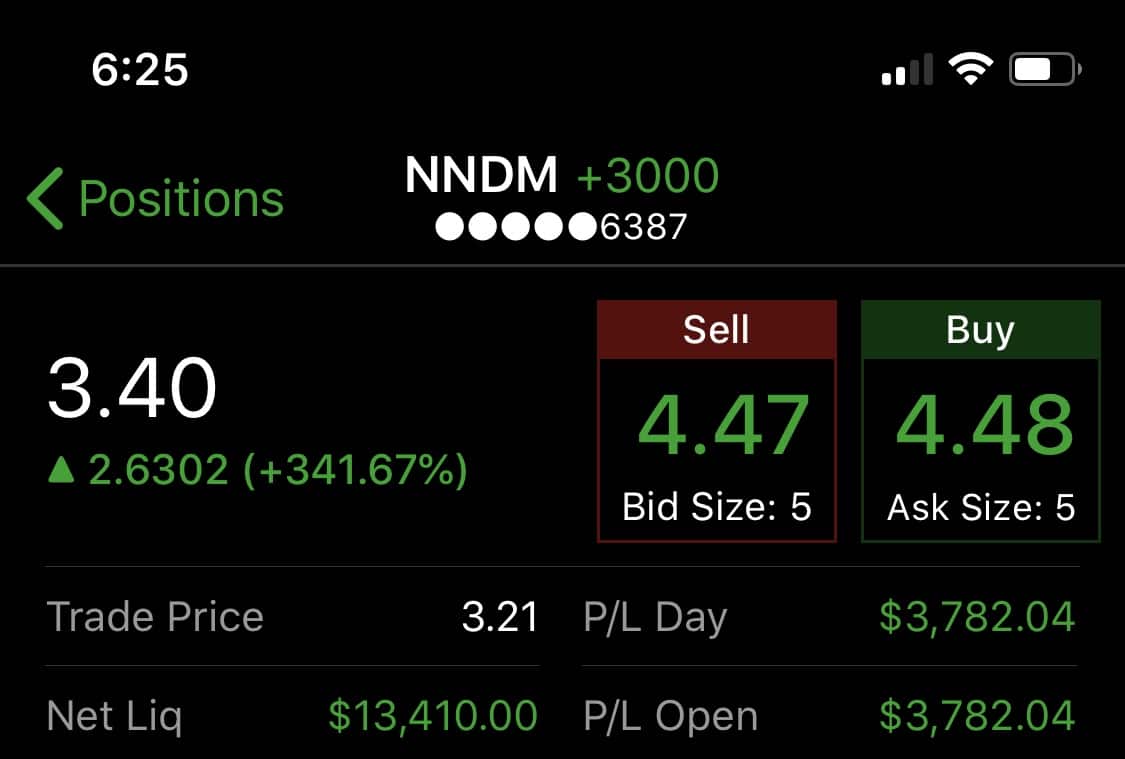 But get this… the stock actually DOUBLED by the time after hours rolled around yesterday.

Now, I believe there will be more momentum stocks for me to take advantage of right now…

I mean just take a look at the stocks that were moving this morning — this is where my bread-and-butter lies.

If you notice above, these stocks are all trading under $30, liquid, and traded higher this morning. These are the type of stocks I scan for when I try to hunt down momentum stocks.

The thing is, this wasn’t just a lucky trade in my opinion, and I want to show you my strategy and how I’m able to uncover momentum stocks poised to run… ahead of time.

[Revealed] How I Uncovered The Large Move In NNDM

As you may know by now, my strategy primarily focuses on my chart patterns… and some times I like to pair it with catalyst events.

Yesterday, NNDM actually announced that it, along with Hensoldt, found a new way to use 3D printing to develop electronics components… and after that news the stock was on my radar.

Now, here’s what I sent out to my subscribers in an advance notice alert. 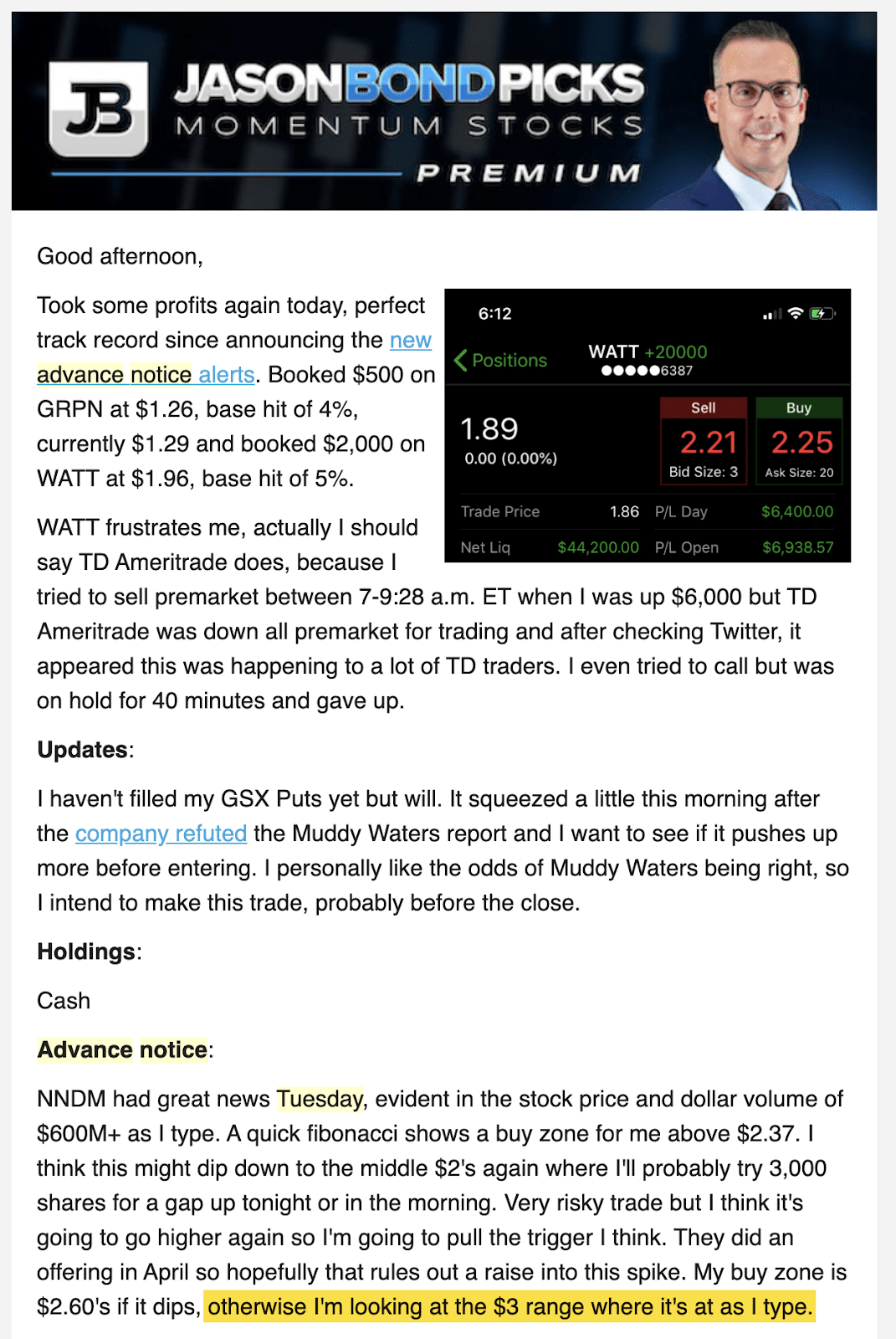 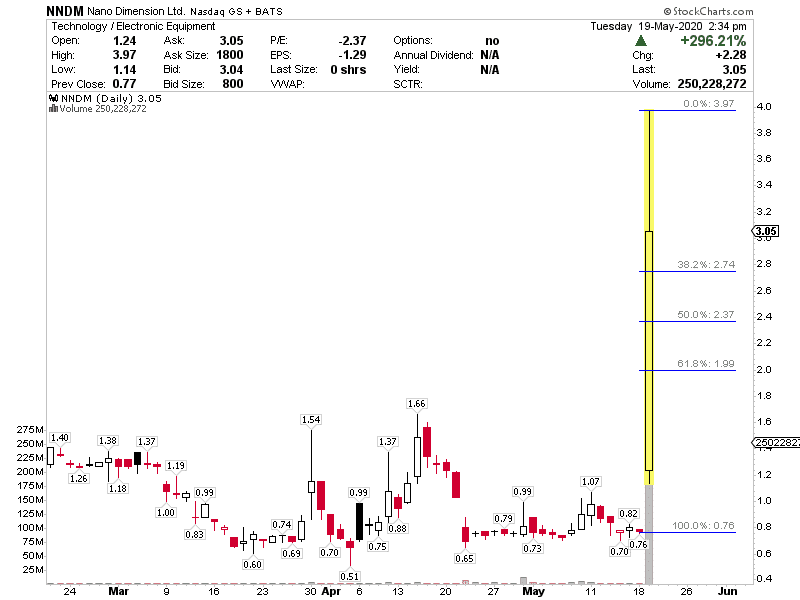 I was actually able to buy shares of NNDM at $3.21, slightly above where I intended, but I had high conviction and believed the stock could run higher.

Why I Took A ~40% Winner Instead Of Holding On

Now, I bought NNDM for a gap that night or in the morning… and wow did it gap.

Tuesday night alone it was up about 100% to $6 from the advance notice around $3. 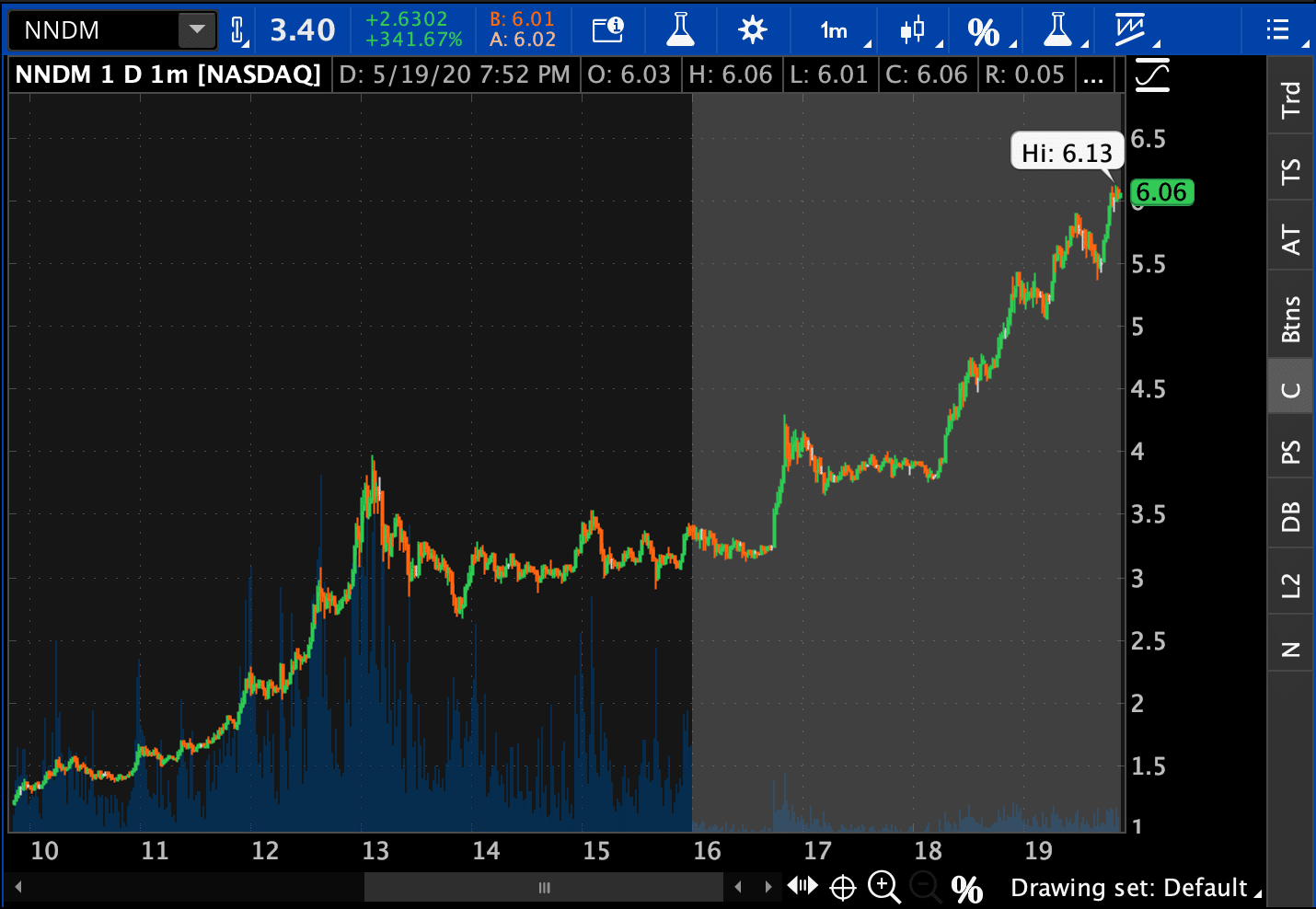 The thing is, I didn’t hold on for the entire move because the massive move happened in the after hours… and I figured it could get dicey or potentially release news.

So I’m glad I stuck to my plan.

By having a profit target, I actually take the subjectivity out of my decision making. Since 40% is way more than my typical goal, can I really be upset I didn’t get 100%?

I don’t think so.

When it comes to momentum stocks, I believe it’s important to have profit targets and stop-loss areas in mind and stick to them… because you never know when these fast-moving stocks can go against you.

For example, let’s say I actually held my entire position overnight after seeing the stock double in just a matter of hours… thinking it could continue higher the following morning.

To me, that’s just taking on unnecessary risk.

You see, after large moves, some companies like to conduct offerings to raise capital… and that’s what NNDM did.

On Tuesday morning, at roughly 8:40 AM ET, the company announced an offering and it just fell from $5 to $2.50 in minutes.

It’s been my experience anywhere between 5-20% returns on a stock in 1-4 days is about the best I can do with any degree of consistency.

That’s based on my 10-years of trading momentum.

So based on that I developed my 5-20% rule, so I know when to pay myself. Because as you can see here, the market can take that 40% away just as quickly as it delivered it.

I was actually glad I knew when to get out and sold early 40% because I’ve learned the hard way, pigs get slaughtered.

Dodged a bullet here, because that offering could’ve been announced last night.

The bottom line here: stocks up 500% are risky and offering roulette is a real thing. I’ve been smacked around in a lot of these but there are ways to mitigate the risk as I described above.

Now, if you want to learn more about momentum stocks and how I’m able to locate stocks poised to run, ahead of time… then you may want to check out my eBook: Momentum Hunter.

In it, I detail what I believe to be my number 1 edge in the market and my bread-and-butter setups. Click here to claim your complimentary copy. 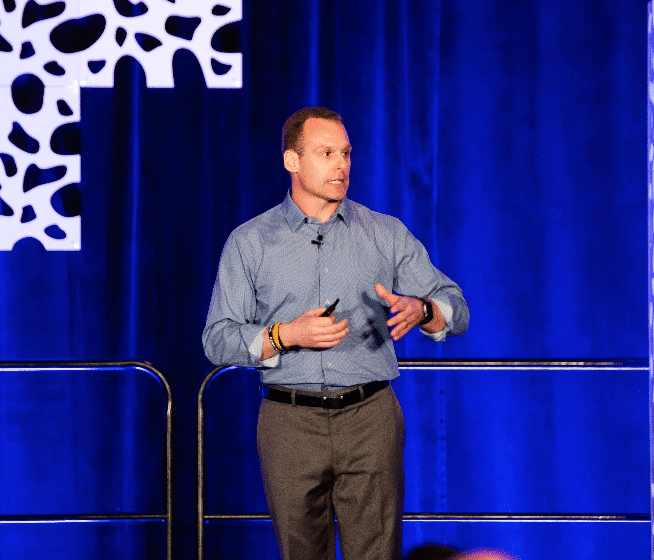