The Market Is In A Fragile State

Well, it’s been a roller coaster ride of a market with twists, turns, and several bumps along the way. Making money in this market environment has been a challenge for many traders… to say the least.

On any given day, a tweet from the President… a headline about political tensions rising… trade war news… or even an announcement from the Federal Reserve Bank… has the power to stop the market on a dime… and reverse its course.

Heck, headlines came out this weekend about how Iran completely lied about shooting down the Boeing jetliner… and we could be waking up to a potential gap down come tomorrow morning.

So how can we still prosper and profit in such an unstable environment?

Focus on what the charts are saying… and keep a keen eye on the price action.

I know, I know… Jason, The market is near all-time highs… how could you possibly say the market is unstable?

Could Index Funds Spark The Next Big Market Crash?

Everyone and their brother are trying to get into the market… and they generally do so through index funds. You’ve probably heard of BlackRock, Vanguard, and State Street before, right?

Well, a lot of investors place their money in the market via passively managed funds, and they pay a small fee to have someone “manage” their money. It’s simple and easy for the everyday investor. However, it doesn’t get you anywhere, especially if you’re paying the volatility tax.

Think about it like this, BlackRock has approximately $7 trillion in assets under management (AUM), while Vanguard comes in at $5.6 trillion and State Street with $2.9 trillion. Combined, these three behemoths control about 80% of all the money in index funds.

Get this, more than 20% of the shares of a typical S&P 500 company is held in their portfolios… and the “Big Three” owns nearly 20% of Apple Inc (AAPL). Heck, they also have some hefty holdings in the world’s largest banks.

When you think about it, the SPDR S&P 500 ETF Trust (SPY) finished 2019 up a whopping 31%… and at some point, you’ve got to wonder when will the profit-taking happen?

Very soon, I think… as we may see some outflows in the index funds after the remarkable year it’s had. If that does happen, there may be a flood of sellers trying to take profits… and I could see panic ensue, and traders potentially dumping a bulk of their holdings.

Right now, the charts are telling me to be careful and brace myself for the next leg down. Just take a look at the daily chart in SPY. 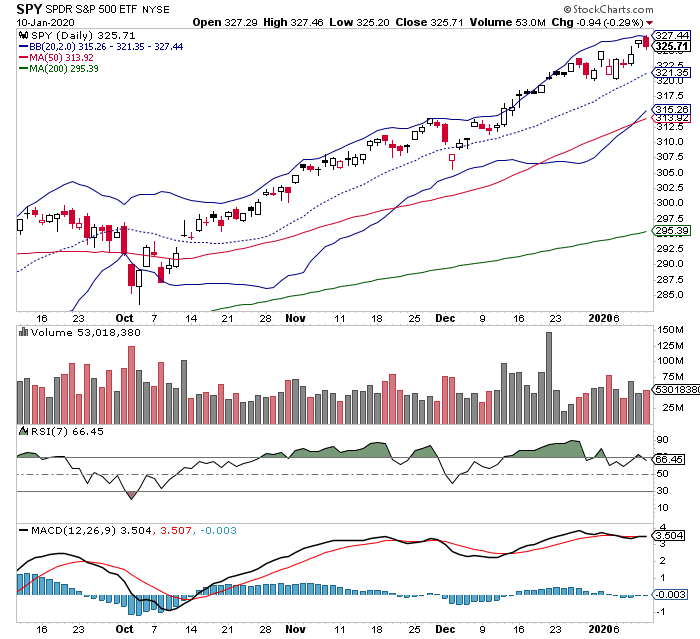 On Friday, SPY hit the upper Bollinger Band range and pulled back. Typically, when a stock or ETF reaches that level, it’s a sign it could mean revert and fall to a key support level. Not only that but if you look to the RSI, the SPY is very close to overbought levels.

When you take a look at high beta names, such as Apple Inc. (AAPL) and Tesla (TSLA)… it’s the same story. 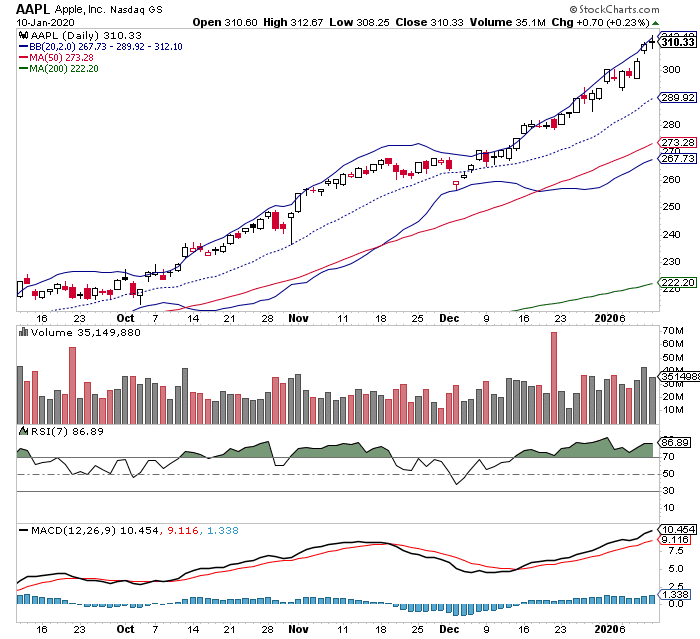 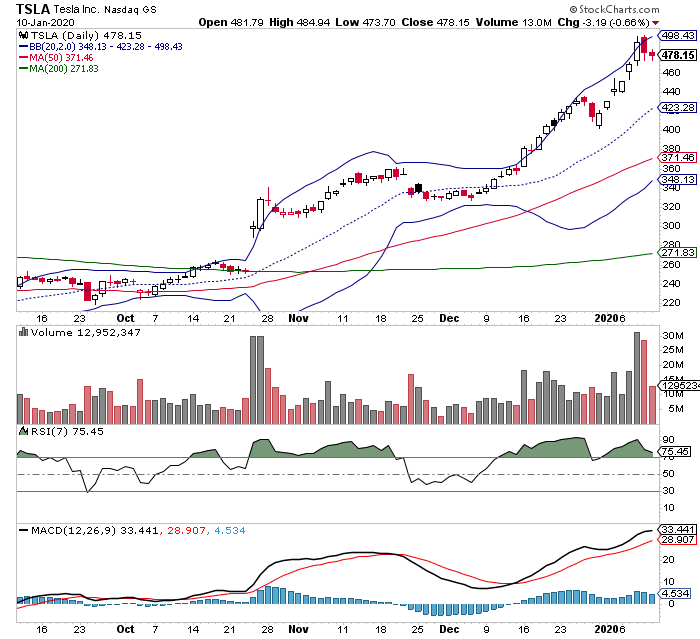 They’ve both reached extreme levels… and are extremely overbought.

Of course, one of the major smoke signals in this market right now is the political tensions between U.S. and Iran. That could shake things up for the overall market, and overvalued stocks. However, that may all get overshadowed by every trader’s favorite season: earnings season.

Corporate earnings season is set to kick off this week with JP Morgan Chase (JPM) reporting this Tuesday. Traders will be watching closely as they look for clues as to how the banking industry is faring.

Of course, many have been betting on global growth picking up this year… after the U.S. and China “trade truce”. However, what happens if corporations actually come out and report bad earnings for Q4 2019?

Well, we could be looking at a potential correction.

Of course, I won’t be going out on a limb here and randomly shorting stocks. I’ll be following them closely and waiting for the right time to pounce, and I’ll be waiting until I see the smoke signals pop up.