Despite Tesla Inc (TSLA) revealing new technology and a $25K self-driving car slated to come out within three years, the stock is taking a hit today.

Well, it’s something called a “sell the news” event.

What that means is everyone and their brother “bought the rumor”, and held into the event… once the news was out, traders weren’t all that enamored with it.

That’s kind of what happened with TSLA, in my opinion.

However, with all this volatility in TSLA, there are good risk-reward opportunities that have been uncovered.

Let me show you where they are and the strategy I would consider if I were to play TSLA.

Some Wild Bets Being Thrown Down In TSLA

Take a look at some of these bets that came across my screen on TSLA on Wednesday morning.

It’s no surprise to me traders are getting wild with some of these trades and using the pullback as a way to “buy the dip”.

However, some of these bets are so wild…

And it signals to me, these may be gamblers. 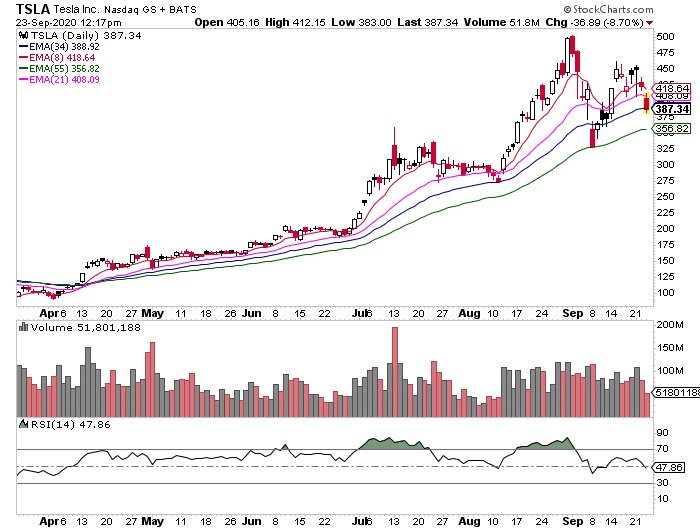 I mean, take a look at where TSLA is on the daily chart. It’s right at the 34 exponential moving average (EMA). That’s the last line of defense before it tests another key support level at $356.

I don’t know about you, but with all this selling pressure, I wouldn’t be surprised if TSLA continues to dip before it finds a support level.

The bets I showed you above were all in deep out-of-the-money (OTM) calls, and the odds of those call buyers winning are pretty slim.

I mean someone purchased the $450 calls expiring in just 2 days. The odds of losing money on that bet?

I don’t know about you, but who is really putting their money behind a TSLA trade that has an 88% chance of losing money?

I mean, there were other calls going off… and it doesn’t look pretty right now.

To be honest with you, trading around this TSLA event is pretty risky, and the better way to play it would be to utilize bull puts or bear calls (depending on your outlook on TSLA).

By utilizing EMAs, you can find key areas of demand and supply to identify strike prices for the bull puts or bear calls.

For example, let’s say you believe TSLA won’t close above $420 by Friday (just above the 8-day EMA).

Well, rather than buying puts and paying a juiced premium…

One could sell the $427 calls expiring on Friday, and simultaneously purchase deeper OTM calls with the same expiration date.

That means if TSLA doesn’t close above $427 by Friday, one could collect all the premium generated from the bear call.

If you’re bullish on TSLA, you can utilize the bull put. That means selling a put at a strike price you believe TSLA will have a hard time breaking below, and simultaneously purchase a deeper OTM put to hedge the position.