Plug Power Inc (NASDAQ: PLUG) announced that Amazon.com Inc (NASDAQ: AMZN) acquired the right to purchase up to 23%, before the market opened. This deal would give Amazon.com access to Plug Power’s hydrogen fuel cells that would help speed up work in its warehouses. Consequently, PLUG was up over 70% on the day. Let’s get into the details of this acquisition.

Now, if you haven’t heard, Amazon has over 45,000 robots in its warehouses, and they may need efficient batteries to operate. For Amazon, automation is key in the company’s fulfillment network because it needs to ship products out to consumers, quickly. That in mind, Amazon will start using Plug Power’s innovative GenKey technology to start powering industrial equipment in certain warehouses.

Specifics of the Deal

The supply agreement states that Amazon must spend at least $600M over the life of the contract with PLUG, in order for its warrants to fully vest. That said, the aggregate payment for PLUG’s goods and services could reach $600M, which would significantly boost Plug Power’s 2016 revenue of $85.9M. Now, if Amazon spends at least $600M, PLUG will grant Amazon warrants to buy up to 55.3M common shares, at an exercise price of $1.19. 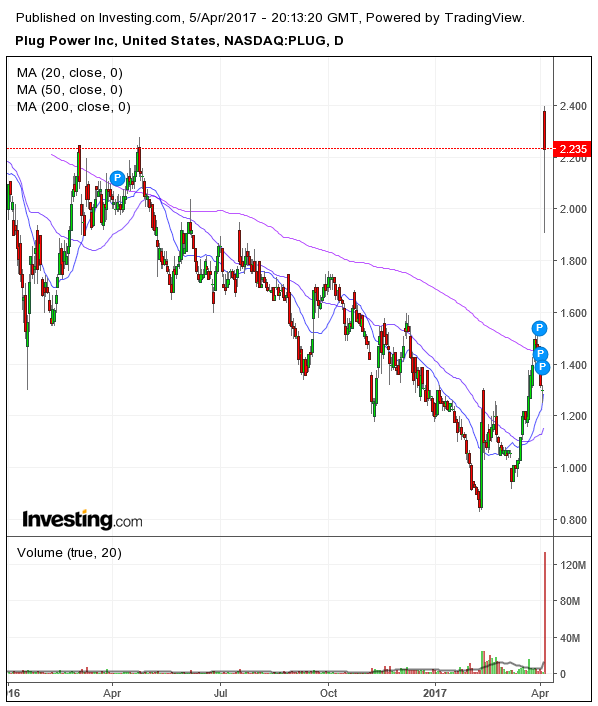 If you look at the chart above, you’ll notice that PLUG recently broke out of its downtrend, and tested its 20-day SMA, which held as supported. Thereafter, the stock gapped higher and broke above its 200-day SMA, after this catalyst.

Plug Power Inc. has 191.2 million shares outstanding, 179.16M shares floating and a short ratio of 18.88%. Consequently, the stock could potentially see a short squeeze due to its short interest and meteoric rise after the Amazon news.

PLUG’s revenue fell by 16.81%, year over year. Additionally, PLUG ‘s net income fell by 3.23% year over year. However, PLUG’s EPS grew by 11.11% quarter over quarter (QoQ), based on its most recent quarterly filing.

Amazon and Plug Power’s agreement could significantly boost PLUG’s revenues and earnings. Now, the stock has a short interest of over 18%, indicating that there may be a short squeeze, if shares continue higher.

I can’t remember the last time I’ve seen a market as crazy as this. To…
Editorial Nathan Bear April 4th