With the conclusion of the first round of the French Presidential election, risk-on trading is back on the table. Now, the final round of the election will be held on May 7, 2017, and Macron will face Le Pen, but the markets seem to be pricing in a Macron win. Here’s a look at the results from the first round: 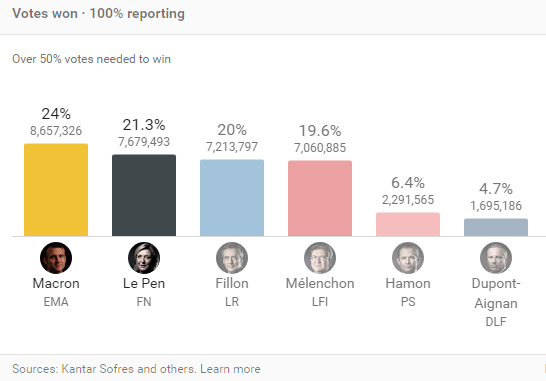 With Macron leading in the French Presidential election, the SPDR S&P 500 ETF Trust (NYSEARCA: SPY), iShares Russell 2000 Index ETF (NYSEARCA: IWM) and the SPDR Dow Jones Industrial Average ETF (NYSEARCA: DIA) shares all ended the day up over 1% today. Additionally, the French CAC Index hit a nine-year high. Not only that, but we saw the euro trad at a five-month high.

Now, risk-on sentiment is back, and it caused some volatility in some safe havens, such as gold and U.S. Treasury bonds.

The SPDR Gold Trust (NYSEARCA: GLD) opened down over 1%, but ultimately rallied a little and ended down 0.68% on the day. That in mind, it seems like market participants are shifting from safe havens to risky assets like equities. Prior the election, we saw gold prices soar to around $1,290, primarily due to political uncertainty. The results of the election remove some uncertainty and risk-off sentiment that the markets saw heading into the election over the weekend.

Heading into the election, GLD was up over 3% over the past month, 6.31% in the trailing three-month period, and 11.59% year to date. Here’s a look at GLD’s performance on the 30-minute chart: 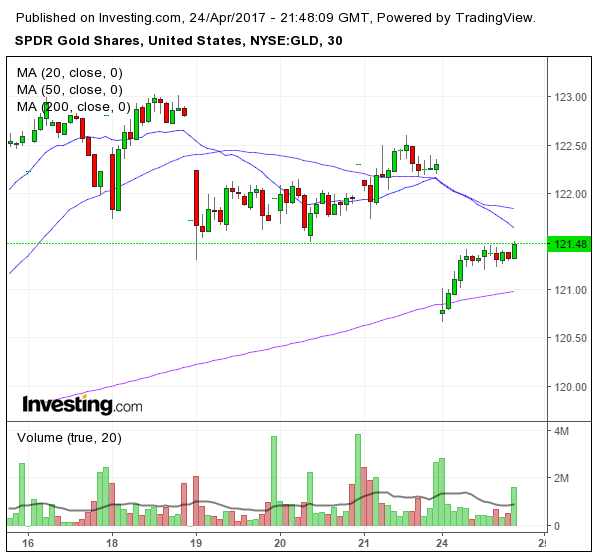 Again, that wasn’t the only “safe haven” exchange-traded fund (ETF) that ended down today. U.S. Treasury securities were lower on Monday, after the markets were able to digest the first-round French Presidential election results. We say U.S. 10-year Treasury rates rise to around 2.27% and U.S. 30-year Treasury rates rise to 2.926%. Due to the inverse relationship between interest rates and bonds, we saw a fall in U.S. Treasury security prices. Consequently, this affected some U.S. Treasury ETFs, such as the iShares Barclays 20+ Year Treasury Bond ETF (NASDAQ: TLT).

The iShares Barclays 20+ Year Treasury Bond ETF aims to provide exposure to long-term U.S. Treasury bonds, and tracks the ICE U.S. Treasury 20+ Year Bond Index. Again, with risk-on trading back on for now, we saw TLT nearly 1% at one point today. The ETF ended the day down just under 0.50%, and was down slightly during the after hours.

Here’s a look at TLT’s performance on the 30-minute chart: 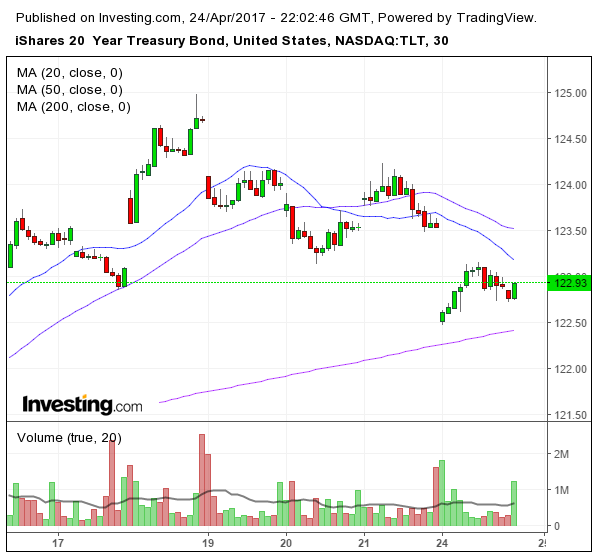