IWM and its Leveraged ETFs (TNA/TZA) 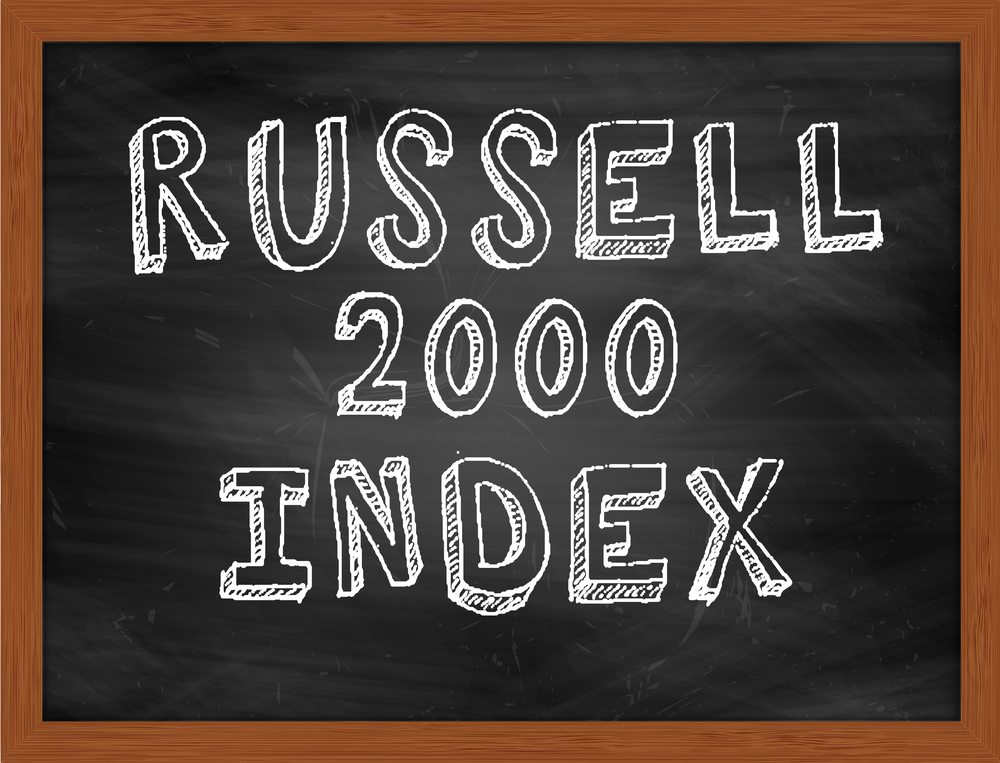 In the following lines, we will discuss two leveraged ETFs traded on the New York Stock Exchange. These are the Direxion Daily Small Cap Bull 3X Shares (TNA) and Direxion Daily Small Cap Bear 3X Shares (TZA). Both TNA and TZA track the performance of the same ETF, which we can call the base ETF – it’s the iShares Russell 2000 ( NYSE: IWM). In turn, iShare Russell 2000 ETF tracks the Russell 2000 index. Are you confused about all these indexes and ETFs? Well, you shouldn’t be – we will crumble it into pieces.

First of all, what is a leveraged ETF? Well, it’s a type of ETF that aims to amplify or multiply the return, i.e. the performance of an underlying asset. In our case, the underlying asset is the IWM (iShares Russell 2000 ETF), while TNA and TZA are leveraged ETFs that track it.

The methods of amplifying the return are various, but generally it’s about using derivatives and debt. Most of the leveraged ETFs can maintain a leverage of 2:1 or 3:1 of the underlying asset.

Keep in mind that leveraged ETFs are better traded in the short-term, generally within the same day, and are much riskier than typical ETFs.

So, what about TNA and TZA?

Now that you know what a leveraged ETF is, you should know that TNA and TZA are two leveraged ETFs that track IWM in opposite directions.

As you could note, both indexes use a leverage of 3:1, and both track the same index (actually an ETF based on that index as shown in the intro) but they are looking to gain advantages of the Russell 2000 index in opposite directions – TNA in the positive territory, and TZA in the negative one.

For example, if the Russell 2000 index would record a daily gain of 1%, then TNA would probably record a 3% daily gain, while TZA would record a 3% loss. I say it probably, because these leveraged ETFs don’t necessarily keep the 3:1 ratio with mathematical precision, but at least they tend to it.

Now, what is up with the IWM?

Since both leveraged ETFs – TNA and TZA, track IWM, you would be interested to know the performance and the components of this non-leveraged ETF.

As discussed above, IWM is a NYSE traded ETF that tracks the Russell 2000 index, an index that includes 2000 the most relevant small capitalization companies from the US. The entire small cap sector is represented by this index, which gained much popularity among all the stock traders.

Now, here is how you should monitor these ETFs. First, you would be interested to check the IWM daily results, which should be very similar with the Russell 2000 index performance. 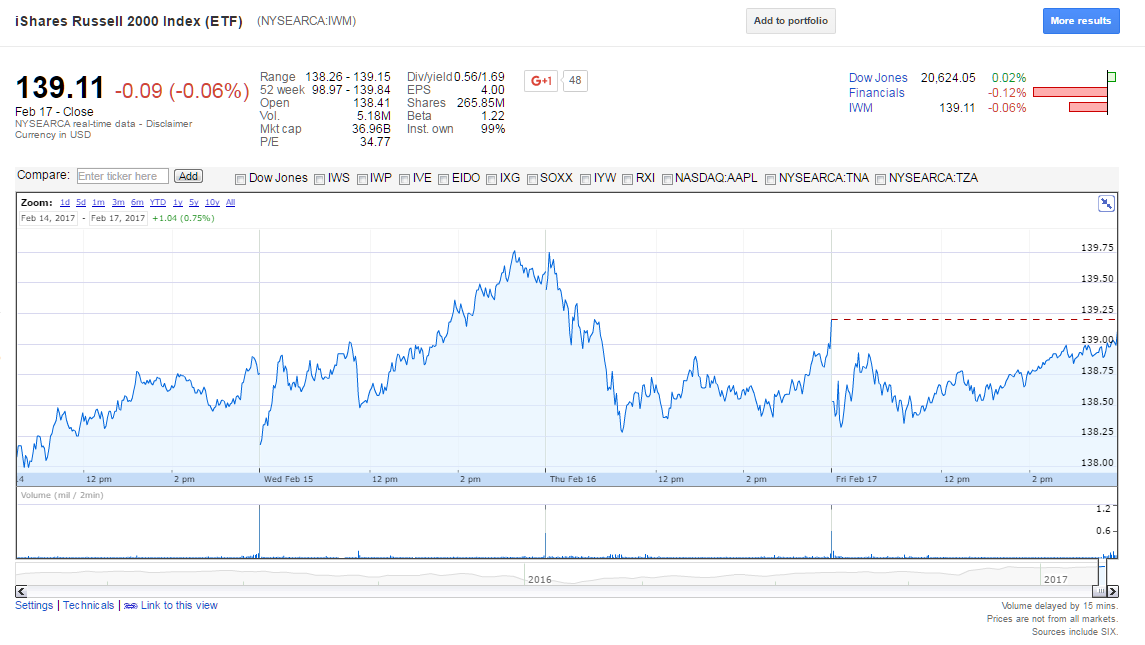 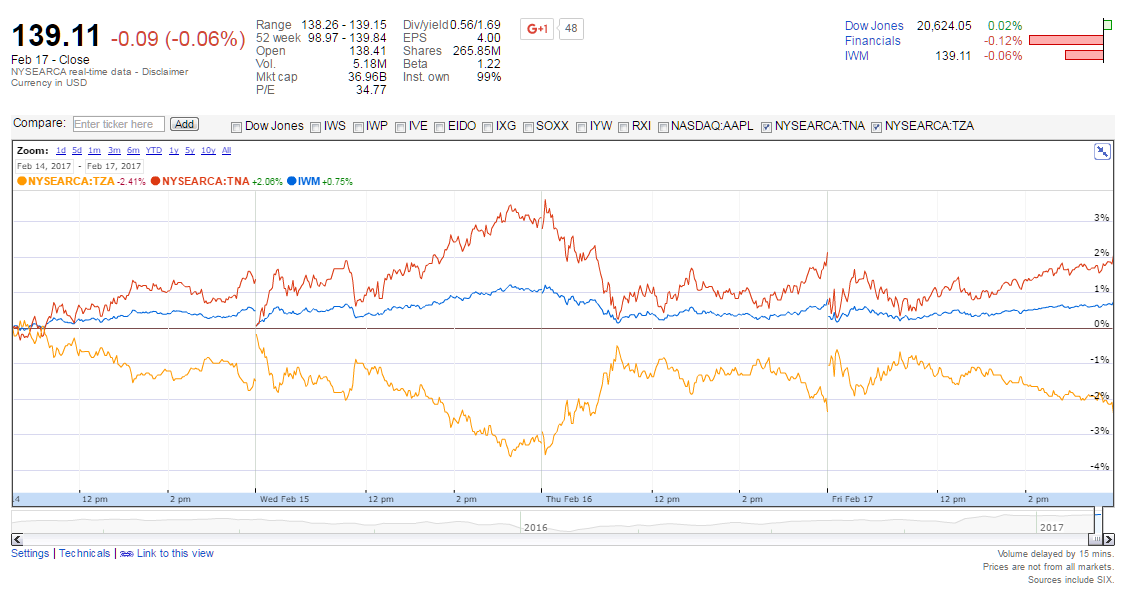 As you can note, TNA rose 2.06% (red) and TZA fell 2.41% (yellow), which is not exactly a 3:1 ratio, but it is close. Note that both leveraged ETFs imitate exactly the IWM movements, but with greater amplitude and with TZA in the opposite direction (mirrored chart).

At the end of our post, we would like to share with you our expectations on IWM. Based on this, you can consider trading the leveraged ETFs – TNA and TZA.

As you can see, IWM is probably finishing a medium term sideways trend and starts a new bullish cycle as the quote broke the resistance level reached at the beginning of December. So, our sentiment inclines on a future uptrend, but you should not exaggerate since the price is still not trending clearly.

The bullish sentiment may be supported by the future tax policy changes promised by Trump, who is about to cut corporate taxes. This was the main reason why the three main stock indexes – Dow Jones, S&P 500 and NASDAQ, hit record after record during the so called ‘Trump rally’ in the mid February 2017.

We think that Russell 2000 index will follow the same bullish sentiment, but not in the long-term, since we reach an overbought level. For the short period, you may consider to invest in TNA.

The Trump’s tax reform is even more relevant considering the fact that the biggest taxpayers in the US business are namely the small capitalization companies. Before the elections, the US President proposed a tax reduction from 35% to 15%, but even a reduction to 25% would still be great news for small caps.

Moreover, you should consider the fact that Trump called for a restrained global trade framework, in which the huge US corporations are encouraged to move from the emerging markets with cheap labor back in the US. This may be a problem for many large caps and here is where the small caps can become more attractive for investing. Russell 2000 index can act like a refugee for those who are seeking to avoid risking with major indexes, even if today the latter are upgrading their records day after day.

Another important aspect that can push Russell 2000 index up is the Trump’s proposal in favor of more deregulation. Some analysts even say that deregulation can be a more important catalyst than tax reductions.

“The most bullish thing Trump will do is not the tax cuts. It will be deregulation, because of the money and manpower companies spend dealing with those.” – said Nick Raich, CEO of The Earnings Scout, in a recent CNBC interview.

Raich concluded that small-cap stocks may be the biggest beneficiaries from a reduction in taxes and regulations, according to the same interview.

The general economic improvement of the US markets can contribute with additional support on the bullish sentiment in regards to small caps.

However, leveraged ETFs are exposed to higher risk, so you should do you own research as well!