Kimberly Clark Corp (NYSE: KMB), the company behind some well-known consumer products like Huggies and Kleenex, reported its first quarter 2017 financial results today. The company reported an adjusted earnings per share of $1.57, which beat the Zacks Consensus Estimate by 3 cents. However, the consumer products company’s revenue missed the Zacks Consensus Estimate by approximately 0.5%. Here’s a look at the company’s earnings results.

Kimberly-Clark Corporation reported 1Q net sales of $4.5B, which was in line with its net sales for the same period in the prior fiscal year. This was primarily due to the changes in foreign currency exchange rates, which increased sales increased by 1%. However, North American organic sales in consumer products fell by 3%, while organic sales in developing and emerging markets increased by 4%.

Kimberly-Clark also provided guidance for the full-year 2017, and it expects its net sales for the year to increase between 1% and 2%, and organic sales up between 1% and 2%. However, this was slightly below its previous estimate for sales growth, as it previously expected organic sales to grow 2%. KMB reiterated its full-year 2017 EPS of a range between $6.20 and $6.35.

Now, first quarter sales in the personal care segment grew by 2%, and this was due to the changes in currency rates. Volumes also increased by 2%, while net selling prices fell by 2%. Now, the company’s operating profit in this segment grew by 7%, year over year. However, sales in North America fell by 1% due to lower volumes, which was offset by an increase of 9% in the developing and emerging markets. Outside of North America, sales in developed markets fell by 8% and net selling prices fell by 5%.

That in mind, there were some mixed growth rates in the company. Although the company could potentially have strong long-term growth in developing and emerging markets, it expects to only grow at a modest pace in 2017, in these markets.

Ahead of the company’s financial results today, it was up over 12% over the past three months, as of the close on April 21, 2017. Moreover, it’s been up nearly 15% year to date, and outperformed the household and personal products industry over these periods.

Here’s a look at KMB on the daily chart: 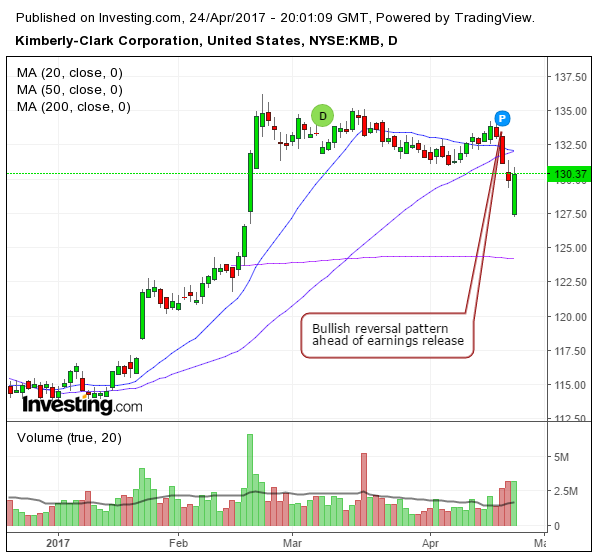