Leveraged Biotech ETFs Moving After Strong Performance in Some Names

Two leveraged biotech exchange-traded funds (ETFs) were moving today, after some of their top holdings climbed higher. Now, one thing to note is that leveraged ETFs are more risky than traditional exchange-traded products, as they seek to provide performance that is multiple times that of its underlying. Let’s take a look at how these ETFs performed today.

The Direxion Daily S&P Biotech Bull 3X Shares (NYSEARCA: LABU) ended the day up nearly 5%. Now, the leveraged ETF aims to provide daily investment results, before fees and expenses, that are three times the performance of the S&P Biotechnology Select Industry Index. Therefore, with the ETF’s underlying index ending the day up 1.60%, LABU performed as one would expect it to. However, there were some notable gains in the ETF’s top holdings.

Ionis Pharmaceuticals Inc (NASDAQ: IONS) shares, one of LABU’s top ten holdings, ended the day up over 7% today, which contributed to the S&P Biotech Select Industry Index’s run higher. The move higher may be due to Graham Tanaka, who manages the $15.1M Tanaka growth Fund, which has been up over 17% since the election. Now, Tanaka is looking to move more money into underperforming biotechs, such as IONS. In addition to this, IONS had some positive data, recently, from its Phase III trial of volanesorsen, which could be an indication that the FDA may approve the drug. Now, the company has an event coming up, the AAN 2017 Annual Meeting between April 22 through April 28, 2017.

Clovis Oncology Inc (NASDAQ: CLVS) shares were up 4.52% on the day, and was up nearly 3% during the afterhours. Now, this is the top holding in LABU, which also contributed to the leveraged ETF’s move higher. In addition, ACADIA Pharmaceuticals Inc (NASDAQ: ACAD) shares were up over 1% on the day. With some of these biotechs trading higher, it could be an indication the market may be thinking that some biotechs could trade higher, and may be taking these on as sympathy plays.

Here’s a look at the daily chart on LABU: 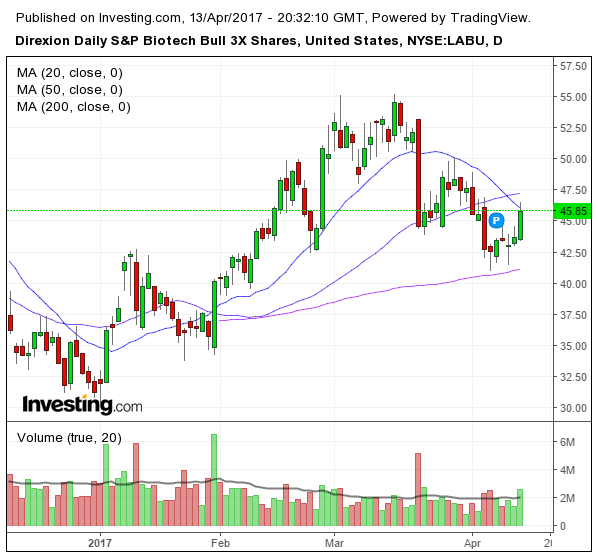 Now, when the S&P Biotechnology Select Industry Index rises, the Direxion Daily S&P Biotech Bear 3X Shares (NYSEARCA: LABD) falls, and vice versa. Now, this is due to the fact that LABD is an inverse leveraged ETF. That in mind, the ETF provides the inverse of three times the daily performance of its underlying index.

With some of LABD’s top holdings rising and the S&P Biotech Select Industry Index, this pushed LABD down 4.77% today, and over 1%, at one point, during the afterhours. 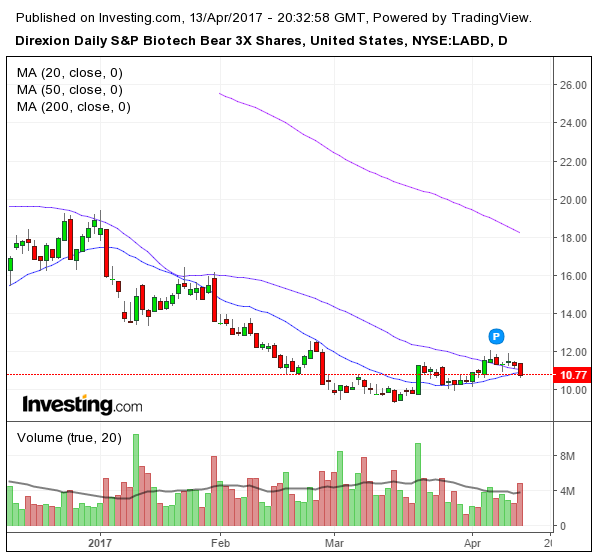 LABU shares rose nearly 5% on the day due to some strong performance in some of its top holdings. Conversely, LABD shares were down nearly 5% on the day. This may be due to some traders placing bets that some biotechs might rise in sympathy with some large biotech names that may beat earnings. Now, there’s a stacked calendar of biotech and pharmaceuticals stocks reporting next week, which could cause some volatility in LABD and LABU.