The Financial Select Sector SPDR Fund (NYSEARCA: XLF) shares were up over 1.50%, after some of its top holdings had strong performance today. Now, this performance may have been due to reports that Randal Quarles, a former Treasury Department official, could be nominated as the Federal Reserve’s Vice Chairman for bank supervision. Let’s get into how this nomination could affect the banking industry.

Quarles served as a top Treasury Department official during the Bush administration, and Quarles could potentially boost banks. Some banks have been complaining about new regulations that were put into place after the global financial crisis. However, Quarles could potentially push through some new regulations that might help the banking industry.

Quarles currently serves as a managing director at a Salt Lake City-based private equity firm, and he could bring his extensive background in finance to this new role. However, no final decision has been made yet. The markets may be thinking that Quarles could ease some of the regulations that has been constricting the banks, which could potentially boost bank profits and earnings.

Banks and XLF Rise After This News

The Financial Select Sector SPDR Fund’s top holdings include some large banks, such as JPMorgan Chase & Co., Wells Fargo & Company, Citigroup Inc and Bank of America. Keep in mind Bank of America is expected to report earnings ahead of the bell tomorrow. Getting back to the performance of these banks and XLF. The potential changes in the political landscape is just one of the catalysts that sent XLF and some banking stocks higher. Some large banks have already reported earnings last week, which indicated some growth, and consequently, market participants may be looking for other banks to report strong earnings.

Here’s a look at the recent performance of XLF on the daily chart: 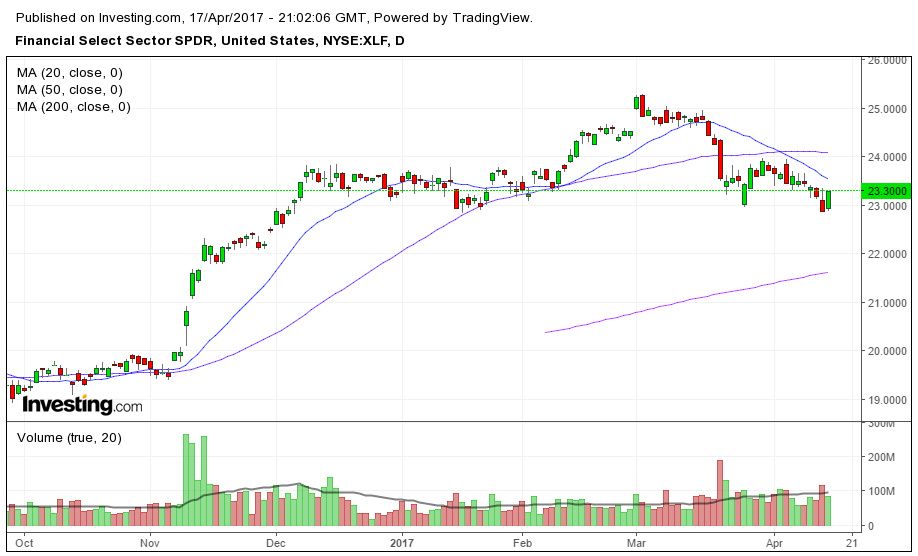 Despite having a bearish pattern, when the 20-day SMA crossed below the 50-day SMA, XLF tested its support area around $23, and closed at $23.30, indicating its support area held up quite well. Moreover, it seems as if a double-bottom is forming, but we’ll need to see the ETF close up for a few more sessions for some confirmation.

There could be some drastic changes in the banking industry, with President Trump expecting to nominate Quarles for the Fed’s Vice Chairman role. That in mind, there could be some deregulations in the industry. However, this is all speculation now, and nothing is set in stone. XLF and banks benefitted from this news, and we’ll keep an eye on these ongoing developments.