PayPal is Still A Thing…

PayPal Holdings Inc (NASDAQ: PYPL) shares were up over 6% today, after the company reported its first quarter 2017 financial results and raised its guidance for the full year. The payments company also beat its revenue and EPS estimates. With the advent of Apple Pay and Samsung Pay, PayPal was still able to operate on all cylinders and provide strong results.

Here’s a look at PayPal on the daily chart: 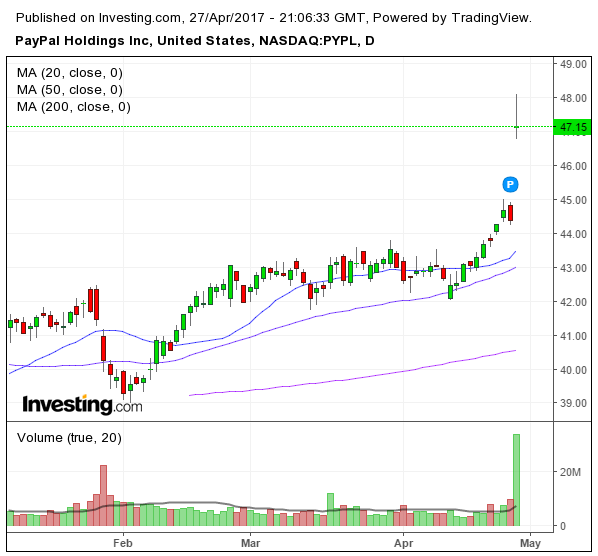 Let’s move onto some operating highlights in the first quarter of 2017, the company had 6M active customer accounts added, and PayPal ended the quarter with 203M active customer accounts, which includes 16M merchant accounts. The company’s payment transactions grew by 23% year over year to 1.7B. PayPal also had $99B in total payment volume, which was up 23%, from the first quarter of the 2016 fiscal year.

According to PayPal President and CEO Dan Schulman, “With another quarter of strong financial results, we continue to deliver on our vision to democratize financial services for our consumers and drive the global transition from cash to digital payments…We are deepening our merchant offerings and relationships, and expanding our network of strategic partnerships to make PayPal more available in new contexts and new markets.”

The company also has strategic partnerships that could potentially boost its revenues and earnings. PayPal recently announced that it expanded its relationship with Google, and PayPal would be available in the Android Pay wallet in the U.S. Consequently, this could be one key revenue driver. Not only that, but PayPal also announced an agreement with Wells Fargo, and extended its partnership with Visa into the Asia-Pacific region.

That in mind, the company raised its guidance, and PayPal is poised to rise due to these partnerships.

PayPal reported strong revenue growth, and raised its full-year 2017 and second quarter 2017 financial results. The company’s strategic partnerships, as well as its guidance raise, could potentially drive the stock higher.