The FOMC concluded its two-day monetary policy meeting today, and ultimately left rates unchanged. However, there was some language that indicated the Fed could potentially raise rates in its June meeting. Consequently, this caused Treasury yields to rise, and Treasury securities to fall.

Of course, fixed income securities tend to have an inverse relationship with interest rates. In other words, when interest rates rise, bond prices tend to fall, and vice versa. However, you should keep in mind that the inverse relationship between bond prices and interest rate changes does not always hold true. For example, when the Fed raised rates in March 2017, iShares 20+ Year Treasury Bond ETF (NASDAQ: TLT) actually rose due to the dovish language the Fed used in its release. Now, there is one perplexing idea: Treasury bond ETFs like TLT could benefit from a rate hike. First, let’s take a look at what the Fed said today.

One of the main comments that traders focused on today in the Fed’s statement was, “The Committee views the slowing in growth during the first quarter as likely to be transitory and continues to expect that, with gradual adjustments in the stance of monetary policy, economic activity will expand at a moderate pace, labor market conditions will strengthen somewhat further, and inflation will stabilize around 2 percent over the medium term.”

This was an indication to traders and investors that the Fed could raise rates in its next meeting, and the probability of a rate hike jumped above 75%, after the meeting announcement.

Here’s a look at TLT on the 5-minute chart: 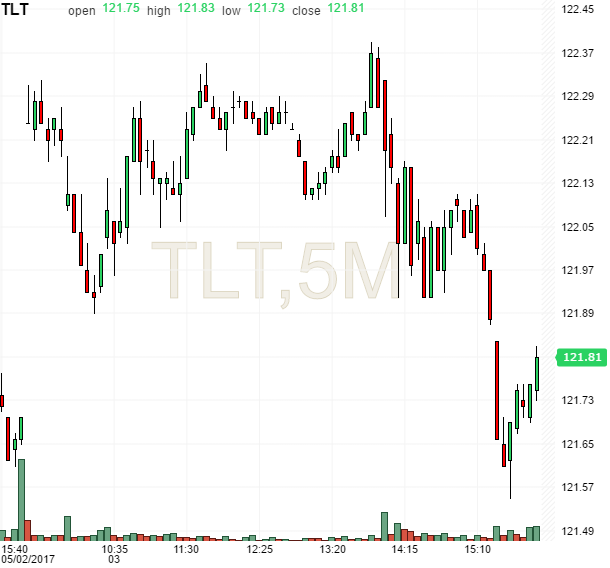 Now, an interest rate hike could actually be good for Treasury bond exchange-traded funds (ETFs). This is a rather perplexing idea to grasp. Over the short term, it’s true that Treasury bond ETFs should fall when the Fed raises rates, and vice versa. However, in a rising interest rate environment, Treasury ETFs should fall over the short term, but over the medium- to long-term, they could actually benefit from an increase in rates.

Why’s that? Well, when rates are rising, the fund managers are able to reinvest the cash flows generated from the investments in Treasury bond ETFs.

Let’s take a look at the iShares 20+ Year Treasury Bond ETF. TLT is an index-tracking fund and aims to provide investment results corresponding to the ICE U.S. Treasury 20+ Year Bond Index, which is primarily comprised of U.S. Treasury bonds with remaining maturities of over 20 years.

If the Fed does move to raise rates in the next meeting, the TLT should experience a short-term fall in its price, but the fund’s managers could reinvest cash flows into securities with a higher yield, and in turn, this would provide investors with higher income.

The inverse relationship between bond prices and interest rate changes does not always hold true, and we’ve seen this happen with TLT back in March. Interest rate hikes could actually be good for TLT, as the fund managers could reinvest cash flows at the higher interest, and in turn, the fund should offer a more attractive yield.