The FOMC announced that its leaving its interest rates unchanged at its target range between 75 bps and 100 bps. However, it noted that it expects the economy to potentially indicate for gradual rate hikes. Now, this announcement was moderately hawkish and the Fed stated,

“The Committee views the slowing in growth during the first quarter as likely to be transitory and continues to expect that, with gradual adjustments in the stance of monetary policy, economic activity will expand at a moderate pace, labor market conditions will strengthen somewhat further, and inflation will stabilize around 2 percent over the medium term. Near-term risks to the economic outlook appear roughly balanced. The Committee continues to closely monitor inflation indicators and global economic and financial developments.”

The Fed’s comments caused the U.S. Dollar Index to rise by around 0.25% by 2:45 PM ET. Moreover, the Fed Funds futures expiring in June 2017 indicated that the market was placing just over a 75% probability of a rate hike in the next FOMC meeting. Here’s a look at the CME Fed Watch Tool. 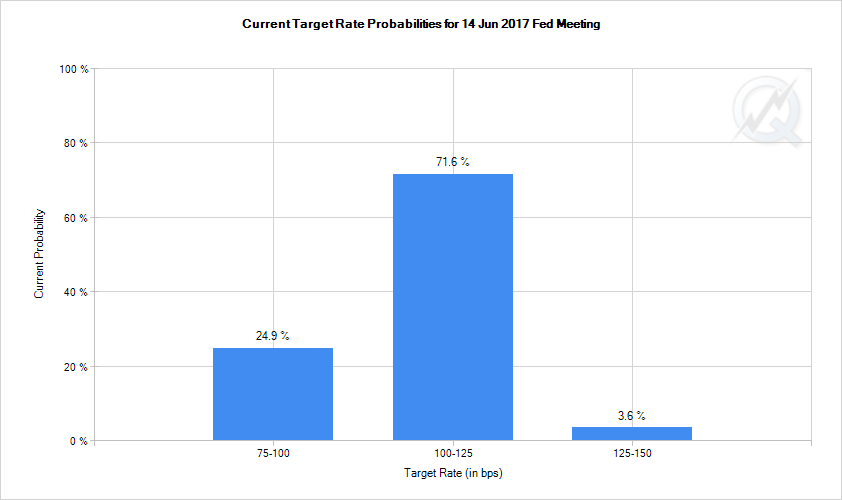 Due to this potential rate hike in June, gold prices traded lower on the day, prompting the SPDR Gold Trust (NYSEARCA: GLD) to fall nearly 1%. Let’s take a look at GLD and the short-term outlook on the ETF.

The SPDR Gold Shares’ Trust aims to track the performance of the price of gold bullion minus the Trust’s fees and expenses. That in mind, it is a good vehicle for traders to gain exposure to the prices of gold. With the markets looking at the Fed to raise rates in June, this weighed on the yellow precious metal and GLD.

The key drivers of GLD’s fall today were the FOMC Meeting and the rise in U.S. dollar. Now, typically, when the market is pricing in higher interest rates, it strengthens the U.S. dollar, and in turn, this makes the price of gold more expensive. That in mind, this could cause traders and investors to shy away from GLD, and therefore, it would reduce the demand for the precious metal.

Here’s a look at GLD on the 5-minute chart: 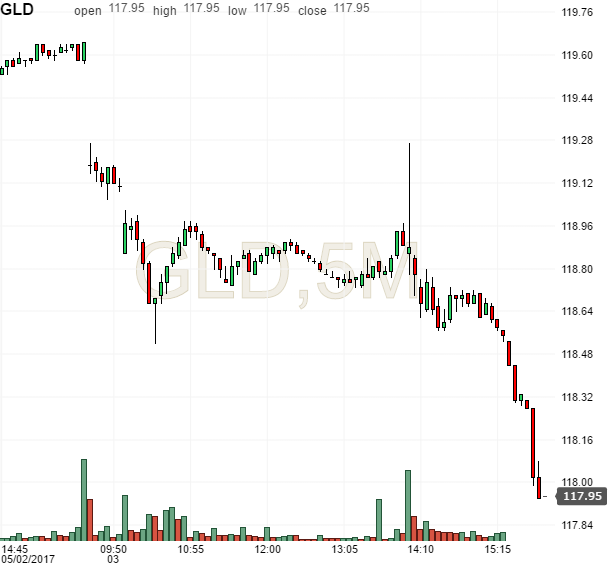 Although some traders may be getting short GLD due to the Fed’s comment and the Macron’s lead over Le Pen, in most polls, ahead of the French Presidential election, there is still some risk on the table. Now, if the jobs report comes in well below the consensus estimate, and a surprise Le Pen win over Macro, as well as increasing tensions in North Korea, gold prices could rise back to the $1,290 area, but for now, it’s still risk-off trading.