Why shorting volatility near highs and BTFD work

The market sold off two days in a row, then rebounded hard. The S&P 500 Index, Nasdaq 100 and Dow all looked like they were going to run lower. It really looked like the start of a correction. On the other hand, the S&P 500 Index was down over 6% in just two sessions, and I thought there could be a retracement. With no clear idea in mind, I decided to take a little bit of time to reflect on my trades. After reviewing some of my trades and looking at my charts to see if the market has done this before, I was able to uncover some opportunities. I got right back on track and realized the market was really strong, and volatility was most likely going to come in. I was able to short one volatility product and banked on that. It looks like the dust settled, and I’m looking for opportunities in the small cap space now. That said, there are two main lessons for crazy days like these: potentially shorting volatility and buying the dip may work, especially if there’s no “real” reason for the sell off.


Shorting volatility near highs may work


Generally, when a volatility more than doubles in a matter of days, you would assume there would be a pull back. The reason being: volatility is said to be a mean reverting process. In other words, when volatility explodes that much, it has a high probability of pulling back.

Here’s a look at the CBOE Volatility Index (VIX): 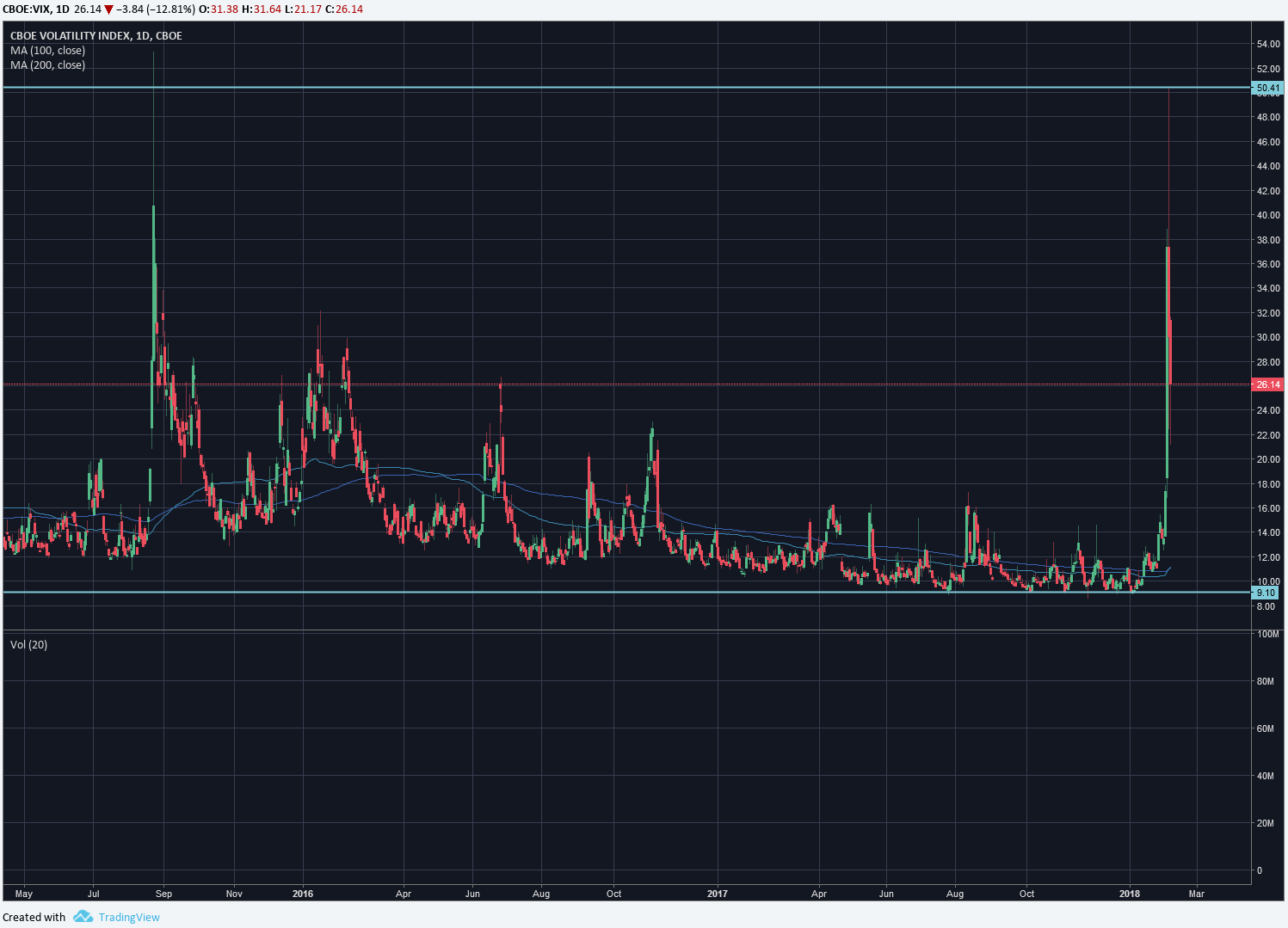 The VIX hasn’t seen the 50 level since August 24, 2015. The day after it reached over 50 in 2015, the index pulled back hard. That said, once I realized this, I figured shorting volatility would be a great play.

Now, I shorted the iPath S&P 500 VIX Short-Term Futures ETN (VXX) because you can’t really directly short VIX. Here’s what I was looking at: 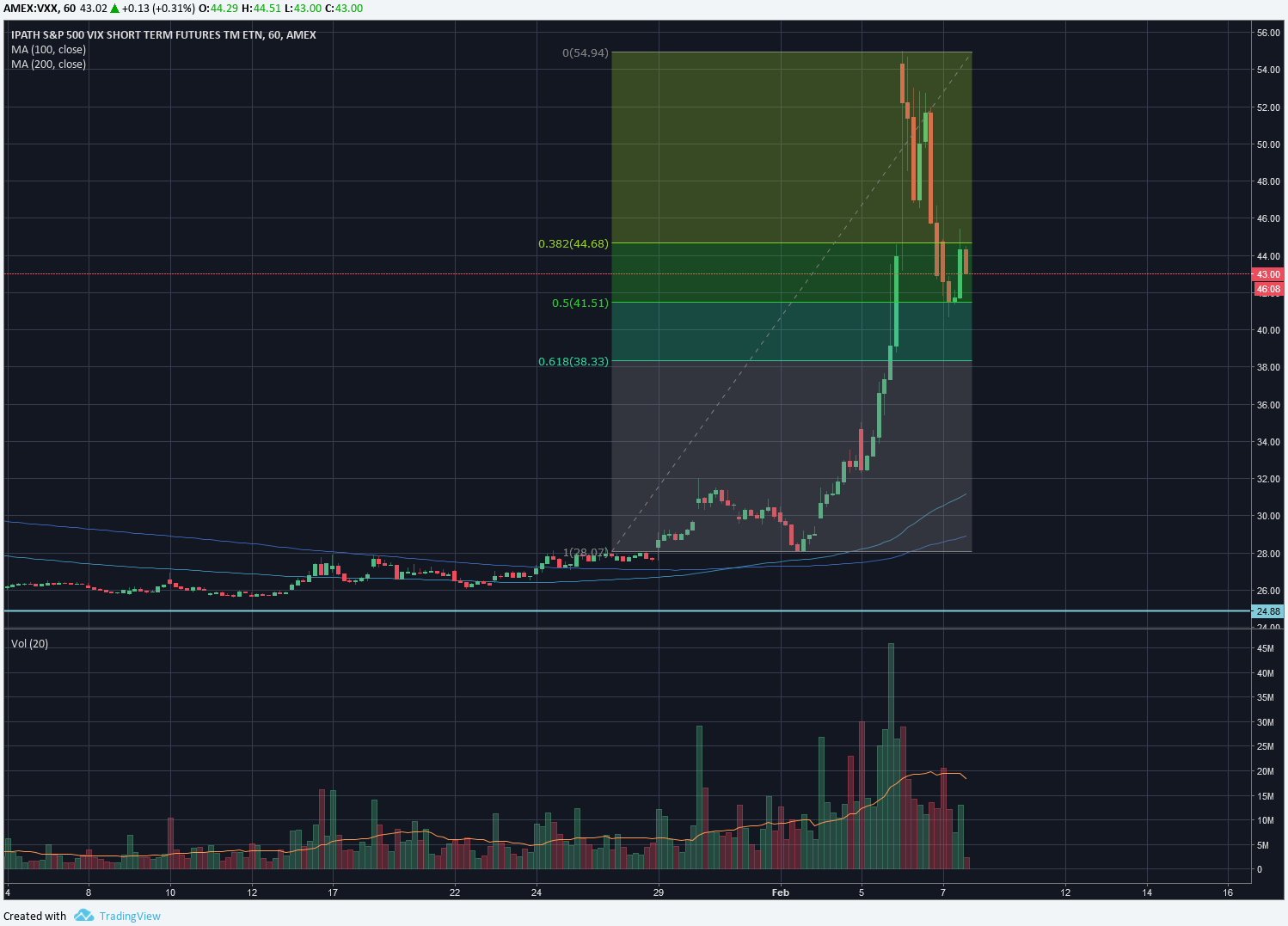 Moreover, I realized the drop in the equity market was most likely due to the spillover from inverse volatility products. We figured the market was going to rebound because it had back-to-back selloffs. It was unlikely the market would head lower off of no “real” news. That said, when the market rebounds, the VIX comes in and so will VXX. We knew this, so I just shorted some VXX and got paid for taking on that risk.

The last time the markets experienced a move like the recent drop was August 24, 2015, also known as Flash Monday. Things were going wild, but buying the dip worked here. This would’ve worked again on the big market drop. 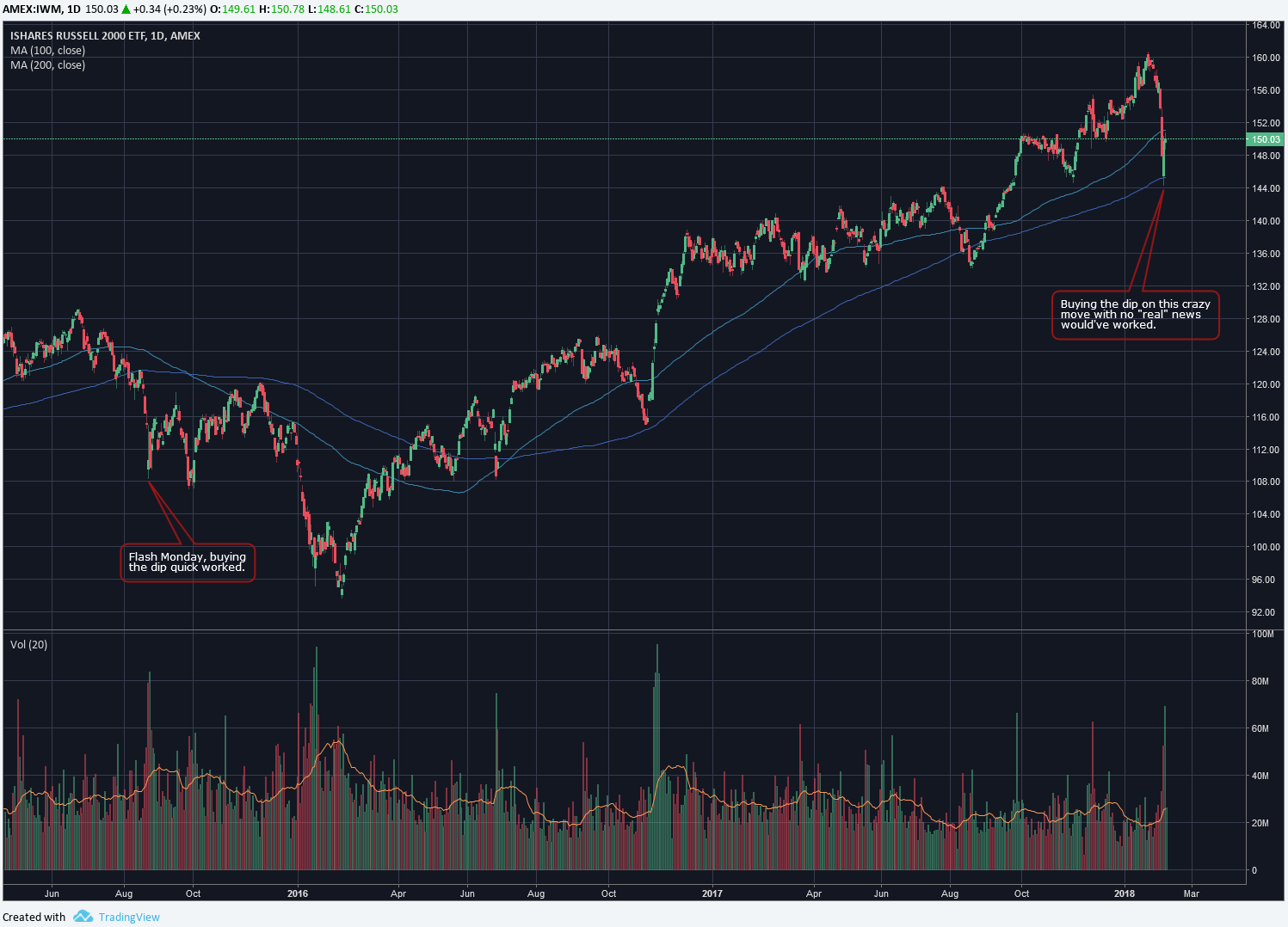 This bounce in the iShares Russell 2000 ETF (IWM) let me know it was okay to get back to trading and finding some opportunities. 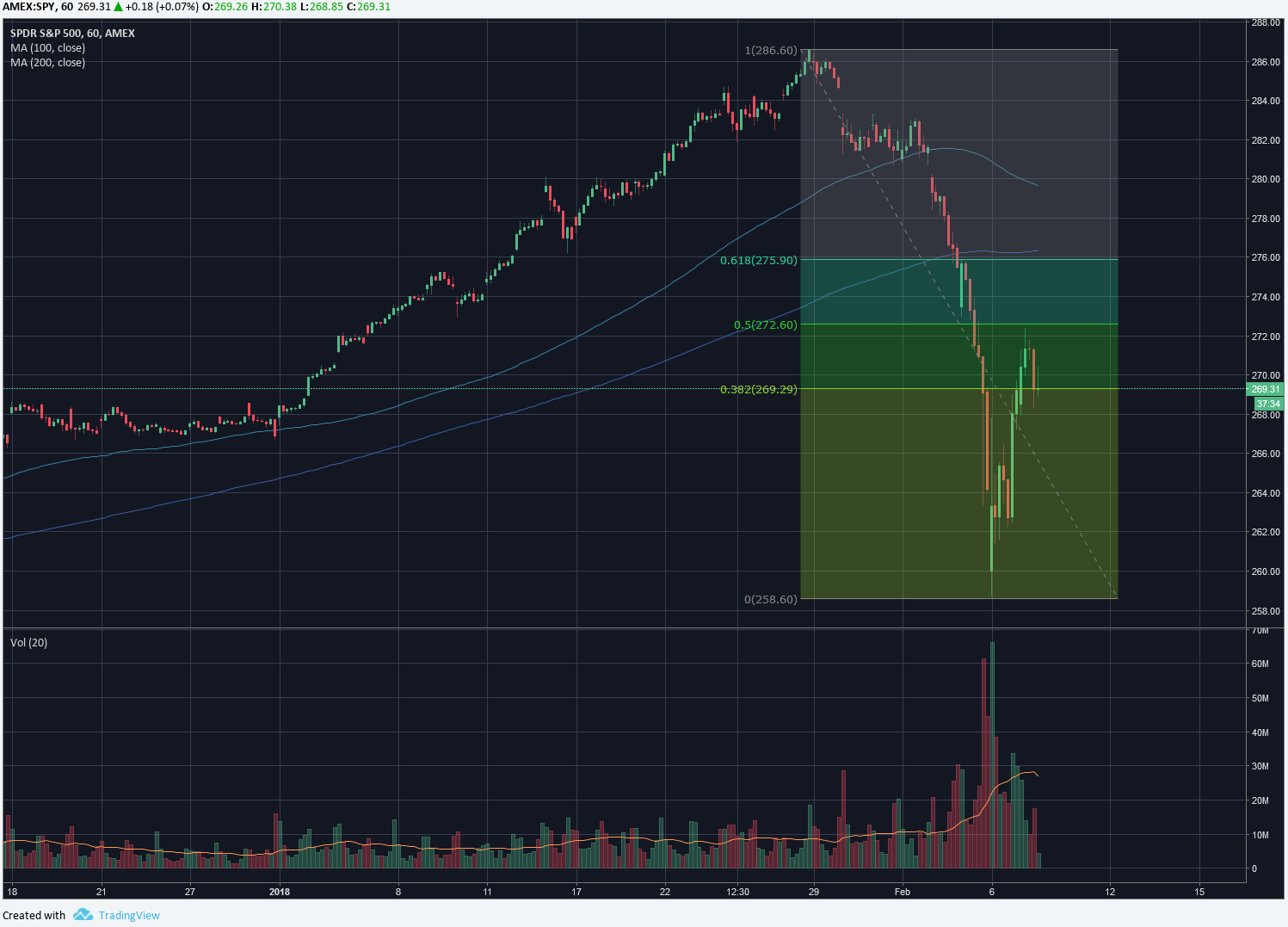 On the daily chart, SPY wicked right below its 100-day simple moving average (SMA) and came right back above it: 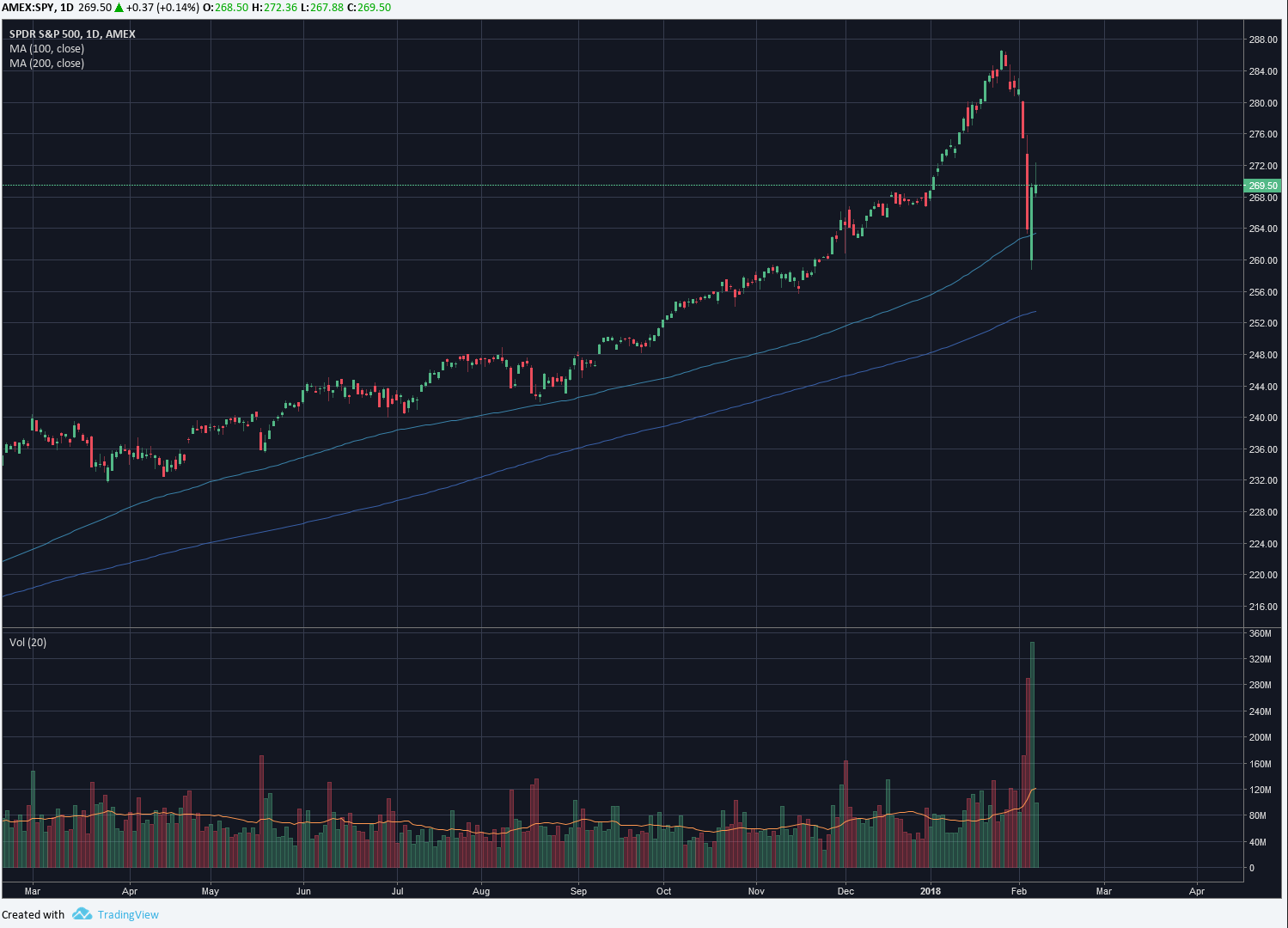 We see this all the time, but like the past, no one knew what was going on at the time. Our community waited for the market to digest before taking on any trades. Even though we missed the BTFD move, we were able to short volatility and make some off of that.

We’ve figured out that was just a two day selloff, and the markets are still resilient. There are plays everywhere after the market flushed. I was able to take a short break, review my trades, journal and talk to other traders. Then I figured out shorting volatility would be a great play, and it paid off. I’m going to be a bit more active, but still practice proper risk management just in case there’s another selloff. For now, I think the markets are going to take a breather.