It’s 4-20, also known as weed day, or “Black Friday” for the cannabis industry. As a friendly reminder, Monsanto Company (NYSE: MON) stated on Twitter, “Happy 4-20. Time for our yearly reminder: Monsanto has not and is not working on GMO marijuana.” Here’s a look at the tweet, if you don’t believe us.

Now, previously, there were rumors circulating that Monsanto was creating a genetically modified (GMO) version of cannabis. The myth has been “debunked,” as the company has continued to state that it has not and is not working on GMO marijuana.

Let’s get into some company news now.

Monsanto President Brett Begemann filed an SEC Form 4 yesterday, and disclosed a sale of 80,940 shares at a price of $116.13. Additionally, Monsanto reported earnings a few weeks ago and had some strong growth second quarter and first half 2017 results, according to the company. Let’s take a look at those earnings.

Monsanto reported an as-reported earnings per share (EPS) of $3.09, and an ongoing EPS of $3.19 for the second quarter of the 2017 fiscal year. Now, the company’s strong results was primarily driven by its strong gross profit growth in its corn and soybean businesses, and the absence of the Argentine peso devaluation. Moreover, its strong growth in its net sales and EPS were also attributed to its sale of the Latitude wheat fungicide business.

Take a look at MON’s performance on the daily chart: 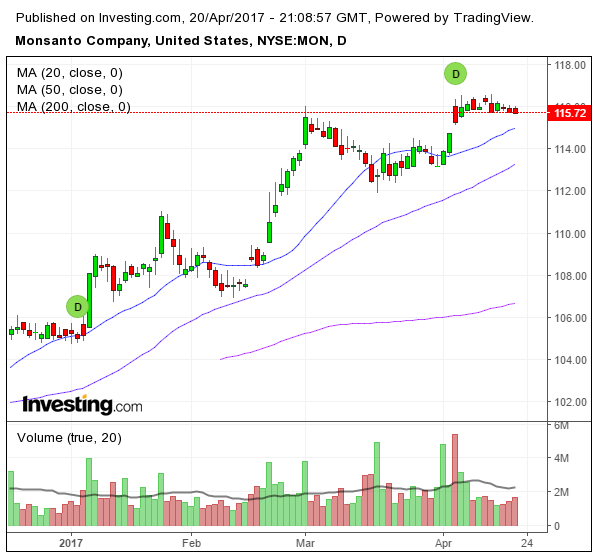 No, the stock’s rise isn’t attributed to the potential changes in the cannabis industry. The company is not working on GMO cannabis.

Monsanto stated, yet again, that it hasn’t been and is not working on GMO cannabis. The company recently reported earnings, and showed some strong growth. It seems as if the company is going to focus on its current businesses, as its been performing well, recently.