Advanced Micro Devices Takes it on the Chin After Weak Guidance

Advanced Micro Devices Inc (NASDAQ: AMD) shares were down nearly 25% on the day, after reporting its 1Q 2017 financial results and 2017 outlook. Now, the stock had its worst one-day performance in over a decade. Here’s a look at AMD on the daily chart: 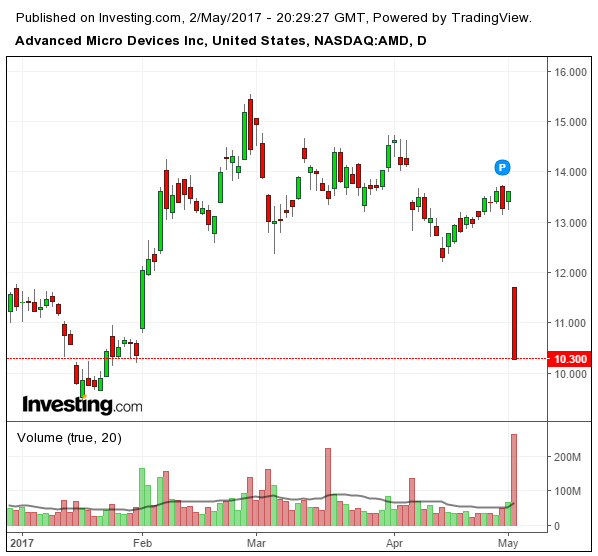 According to Advanced Micro Devices President and CEO Dr. Lisa Su, “We achieved 18 percent year-over-year revenue growth driven by strong demand for our high performance Ryzen CPUs as well as graphics processors…We are positioned for solid revenue growth and margin expansion opportunities across the business in the year ahead as we bring innovation, performance and choice to an expanding set of markets.”

Now, traders don’t really care about what happened in the past. The markets are forward looking, and they want to see how the company expects to perform in the future. In the CFO commentary that was released last night, the company expects revenue to increase by 17% quarter over quarter, plus or minus 3% for the second quarter of the 2017 fiscal year. That in mind, the midpoint of the guidance results in a year over year increase of just around 12%.

Hari stated, “AMD reported an in-line 1Q op loss of $0.04 per share and failed to exhibit the 2Q upside the bulls were anticipating…We believe the GM [gross profit margin] guide, in particular, was a disappointment as expectations, founded on the launch of Ryzen (desktop CPU) in March, were high into the print.”

AMD suffered one of its worst one-day performances in over a decade. Now, with earnings releases, you’ll want to take note of the company’s outlook on its financial performance, if it provides any. This could give you an indication of how the stock could perform that day. You might also want to follow analyst comments because they do have some pull.