American Superconductor Shares Take a Nosedive, After Warning of Q4, and 1Q 2017 Shortfalls

American Superconductor (NASDAQ: AMSC) shares plummeted over 25%, after the global wind and power grid solutions company announced its preliminary financial results for the fourth quarter of the 2016 fiscal year, and the full year of 2016. Let’s get right into the numbers.

AMSC expects its revenues to come in at a range between $15M and $16M, for the fourth quarter of the 2016 fiscal year. The company previously expected its fourth quarter 2016 revenue to be within a range of $22M and $26M. Additionally, the company expects its revenues to be in a range of $74M to $75M for the full fiscal year 2016.

The company cut its guidance, which sent shares lower significantly. Now, the stock could mean revert, and therefore, it might rise over the short term. However, the preliminary results were well below the company’s previous guidance, and consequently, it’s considered a risky trade.

The reason for the company’s lower than expected revenue in the fourth quarter of 2016 was due to the fewer than anticipated electrical control system shipments to Inox Wind Ltd. Inox Wind believes this to be a temporary demand dislocation, primarily caused by the reaction in certain states in India to a national wind energy auction, recently. The auction resulted in a record-low power purchase tariff.

Due to the company’s weak preliminary financial results, AMSC indicated that its non-GAAP net loss and GAAP net loss would be higher than its previous guidance for the fourth quarter of the 2016 fiscal year.

AMSC expects that its revenue will come in at a range between $8M and $9M for the first quarter ending on June 30, 2017. This lower-than-expected revenue takes into account the anticipated seasonally lower electrical control system shipments to Inox. The company also expects cash burn to fall in a range between $7M to $8M during the first quarter.

Now, with the company’s less optimistic outlook, the stock could fall further. Since the stock has only 11.81M floating shares, it could experience more volatility, and could have a continued selloff, it buyers don’t step in. Now, prior to this announcement, AMSC was up slightly on the year. The stock was up just under 15% on the week and just 23.40% over the past month, as of April 26, 2017. However, it gave up all its gains during those periods, after today’s selloff. Here’s a look at AMSC on the daily chart: 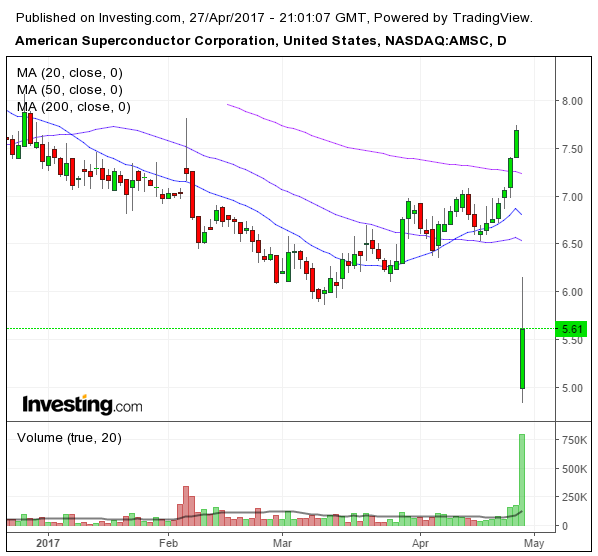