Shares of Applied Optoelectronics Inc (NASDAQ:AAOI) spiked higher on Thursday, after the fiber-optic network products provider announced its preliminary 1Q 2017 results, which was above its previous guidance. Let’s get right into what the company in its Form 8K filing.

Moving on to its income. Applied Optoelectronics Inc expects to report a GAAP net income in a from $18M to $18.4M, and a non-GAAP net income, after tax, between $19.7M and $20.2M, while its previous GAAP outlook was between $15.5M and $17.2M. Consequently, the company expects to report a non-GAAP fully diluted earnings per share between $1 and $1.02, while its previous non-GAAP guidance was between 80 cents and 88 cents per share.

Note that these are preliminary financial results, and therefore, they are subject to the completion of Applied Optoelectronics’ customary quarterly review and close procedures. Consequently, there may be material adjustments to these preliminary results.

Applied Optoelectronics Gets Some Upgrades 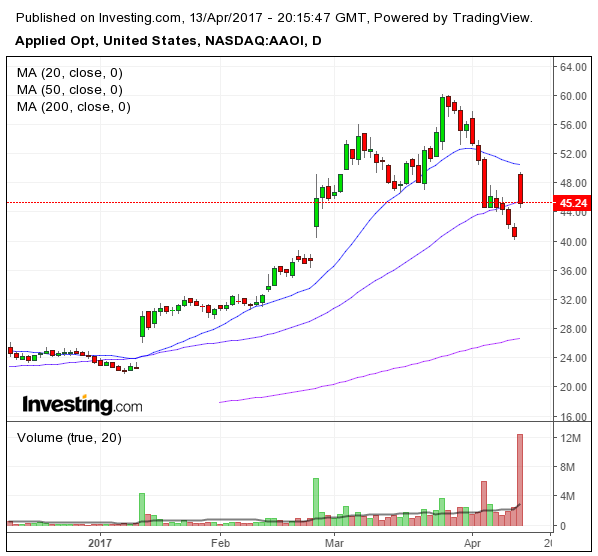 Applied Optoelectronics reported its preliminary 1Q 2017 financial results, which exceeded its prior guidance. Now, keep in mind these are unaudited financial results, and they are subject to material changes. That in mind, the company is expected to report earnings on May 8, 2017*, and it’ll be interesting to see AAOI’s actual results. *Note: Applied Optoelectronics’ earnings date is subject to change.