Groupon Cuts Down Operations in 11 Countries, Looks to Focus on Profit-Maximizing Initiatives

Groupon Inc (NASDAQ: GRPN) shares plummeted over 13% today, after the company reported its first quarter 2017 results. Groupon missed on its revenue estimate, Wall Street was looking for the company to report revenue of $722M, but Groupon’s revenue came in at $673.6M, falling 3% year over year. Here’s a look at GRPN after the earnings release: 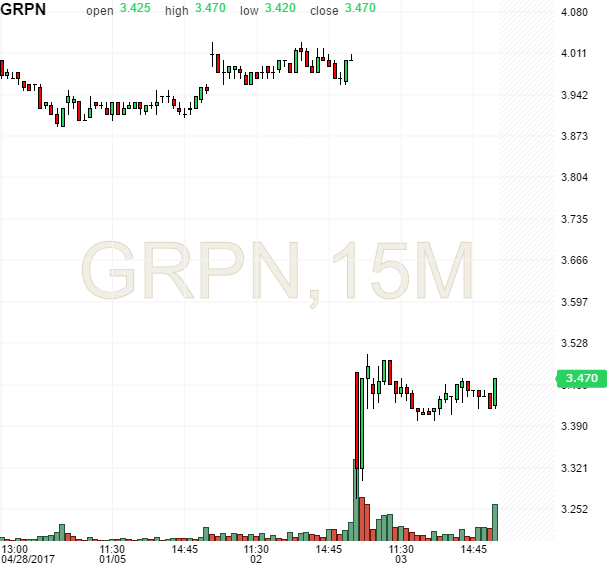 Let’s take a look at the company’s earnings release.

For the first quarter of 2017, Groupon reported gross profit of $309.5M, adjusted earnings before interest, taxes, depreciation and amortization (EBITDA) of $44.8M and net loss from continuing operations of $20.9M. Now, the company reported GAAP loss per share of 4 cents and a non-GAAP income per share of 1 cent. The company’s non-GAAP EPS was above the FactSet consensus estimate of a 1 cent loss.

Groupon Chief Executive Officer Rich Williams stated, “In the first quarter, we continued to make solid progress in our mission to be the daily habit in local commerce…Our focus on growing customers in our marketplace, significantly improving the customer experience and continuing to streamline and simplify our business helped drive a 42 percent year-over-year increase in Adjusted EBITDA and gross profit of $309 million for the quarter.”

The company’s discontinued operations in 11 countries now allows it to focus on business initiatives that could potentially maximize its gross profit.

Now, the company explained the reason behind its decline in International gross profit, which was primarily due to execution problems and short-term disruptions from its country exits.

Groupon reiterated its full year 2017 guidance and expects gross profit to come in at a range between $1.30B and $1.35B. Additionally, Groupon expects its adjusted EBITDA to come in anywhere between $200M and $240M.

There’s still some uncertainty in what Groupon is doing, but this could be a potential contrarian trade after its significant fall today. With its discontinuation of operations in multiple markets, Groupon could focus on its core business and areas where it would maximize the company’s gross profit.