“This move is stupid”

“It makes no sense”

“Who the hell is buying at these levels?”

Now, maybe you’ve said something along these lines in the past. I mean the market doesn’t always make sense. John Maynard Keynes said it best, “The market can stay irrational longer than you can stay solvent.”

For example, recently we’ve seen a lot of sector rotation following the Presidential elections. Traders have started placing their bets on which areas of business are going to improve under a Trump regime.

With that said, we’ve seen a pretty phenomenal move in the Russell 2000 Index. 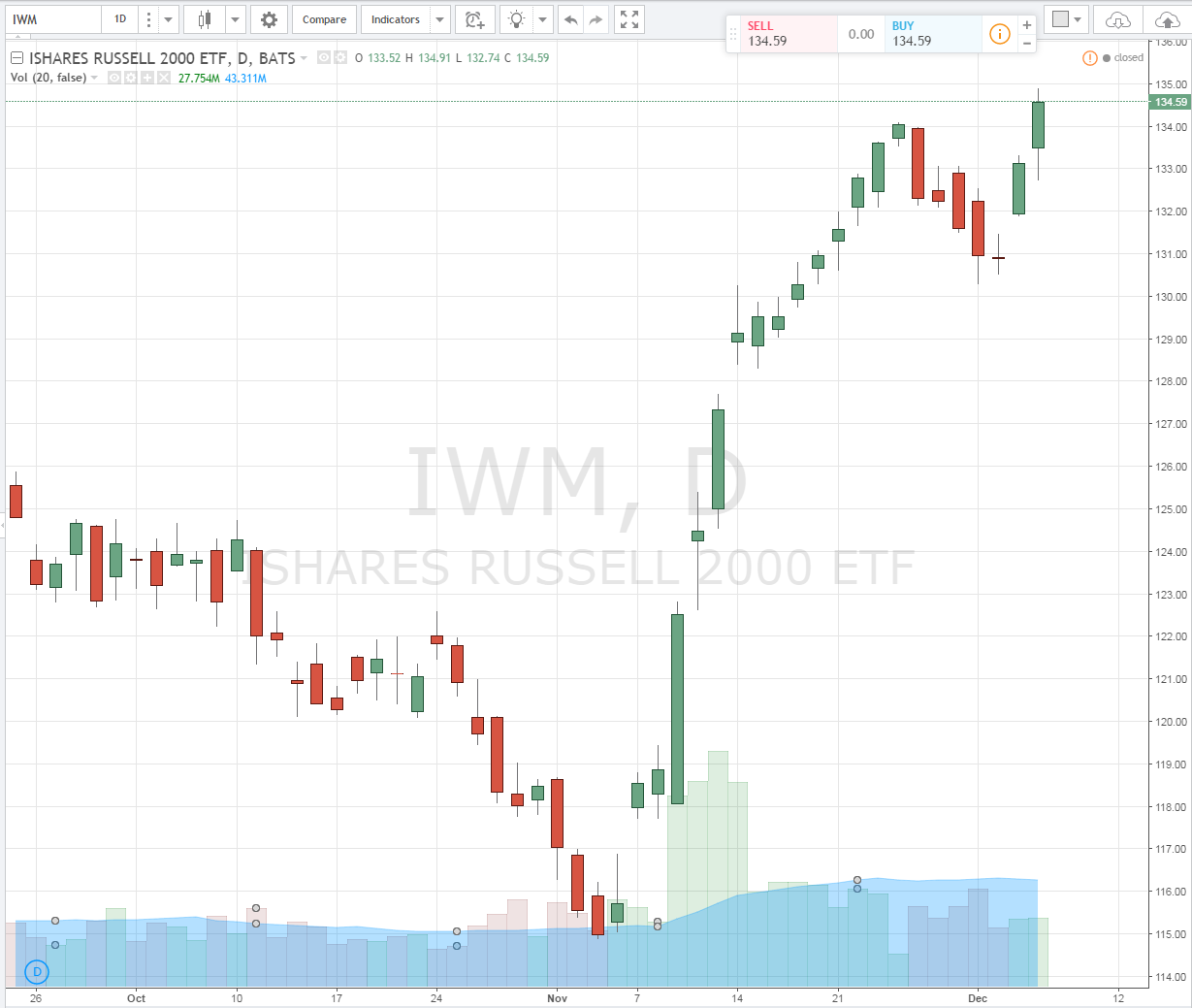 In November, it went on a 15-day straight winning streak. It pulled back a little, and thereafter, it recaptured highs again.

On November 4th, the iShares Russell 2000 Index ETF (IWM) opened at $115.30 and on December 6th it closed at $134.59. That’s a move of more than 15% in about a months time frame!
This is not a stock, but a basket of stocks, 2000 companies to be exact. A pretty wild move to say the least. Some traders thought, this thing is bound to go down…but how wrong can you afford to be?

With that said, sometimes you’ll get caught in a trade, and the move is unprecedented. One of your goals as a trader is to live and fight another day. As silly as this move appears to be…the buyers were not letting up. In this case, the buyers are institutions that have much deeper pockets than you and I.

It’s important to have a line in the sand and stick to your plan. For example, let’s say you took the short in IWM and decided to get out if it rose 5%. If that was your plan…you need to stick with it.

You need to be comfortable knowing that you can be wrong. Also, you should have confidence in your trading because if you take a small loss in a trade, you’ll still be able to recover. You shouldn’t size your positions too big so that you can’t properly risk manage them. Digging yourself in a hole makes it much harder to come back…not to mention, the psychological toll it has on you.

You Can’t Fight The Tape

Part of your trading plan should include how you’ll execute and size your positions…are you going to put in your full tier size on the first order? Will you scale into the position?

One possible way of answering this question is setting a dollar amount you’re willing to lose. In addition, pick a level in which you want your out to be. For example, let’s say you short IWM at $122 and your out is $125. If you’re only willing to lose $1,500 on the trade, you will short 500 shares.

You see, that is a plan. Now, I’m not saying it’s the correct one or there are not better ones out there…however, it’s important to have a plan.

Too many times traders don’t have a plan… and they get caught up in the silliness of the market… get emotional and frustrated… then end up losing a lot more money than they wanted too in the first place.

The market is bigger than you and I, don’t allow yourself to get trapped and have one bad trade destroy your account.