Lithia Motors Inc (NYSE: LAD) shares were up over 11% today, after the company reported its highest first quarter earnings per share (EPS) and revenue in company history. Moreover, the company raised its full year 2017 diluted EPS guidance. Let’s get right into its earnings. 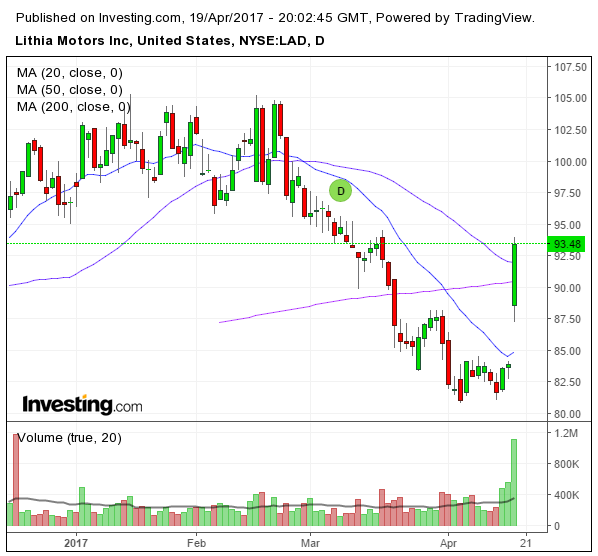 LAD has a book value per share (BVPS) of 36.22, and therefore, it has a price-to-book ratio of around 2.60. Additionally, it has forward price-to-revenue, based on next year’s revenues estimates, of around 0.24. Based on next year’s earnings estimates, LAD has a forward price-to-earnings ratio of approximately 11.4. Moreover, it has a P/S of 0.24. Now, in relation to the industry average, LAD is considered to be undervalued, according to these ratios. Lithia Motors Inc. has 23.9 million shares outstanding, 23.19M shares floating and a short ratio of 8.61%.

Lithia Motors reported strong 1Q 2017 revenues and earnings, relative to its previous financial results. Additionally, it reaffirmed its FY 2017 revenue guidance and raised its FY 2017 EPS outlook, which may have been the main catalyst that sent shares higher.