SkyWest Gets Upgraded, and the Analyst Indicated There’s a “Very Attractive Entry Point”

SkyWest, Inc. (NASDAQ: SKYW) shares were up significantly today, after Raymond James upgraded the stock on its favorable outlook for Q2, as well as its improvements to outstanding contracts and new regional ret contract with United Airlines. Now, the most interesting point that Raymond James analyst Savanthi Syth noted was SKYW’s recent decline in share price uncovered an attractive entry point.

Consequently, Raymond James analyst Syth upgraded SkyWest to Strong Buy, from Outperform, but maintained a $42 price target, which is over 35% above SkyWest’s closing price of $30.40, yesterday. Syth indicated to investors that the substantial drop in the stock, with no new information or developments, created an attractive entry point. Moreover, the Raymond James analyst also stated that SkyWest could offer multi-year margin expansion, as well as large free-cash-flow generation.

However, as always, we should do our own due diligence, so we’ll look at the stock’s recent performance, valuation ratios and fundamentals.

Here’s a look at SKYW’s recent performance on the daily chart: 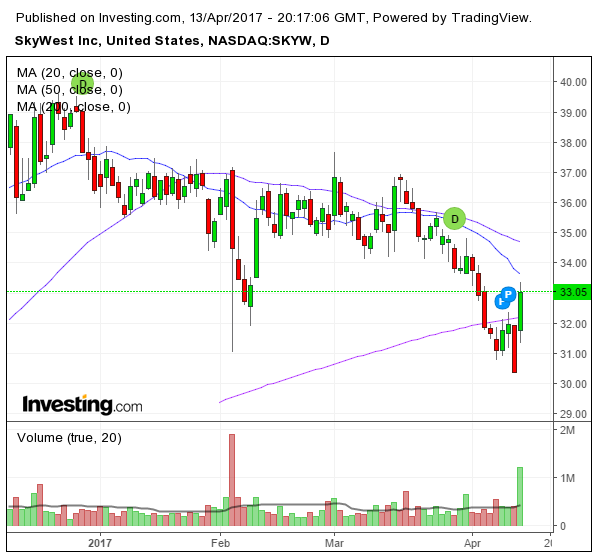 Nonetheless, from a valuation standpoint, SKYW’s recent fall may have caused the company to be undervalued, in relation to some of its peers.

Shares of SKYW were up over 8% today, after Raymond James analyst had some positive comments on SKYW. Now, the company is expected to report its financial results later this month, and we’ll be looking to see how the company did for the quarter ended in March 2017.