Snyder’s-Lance Inc (NASDAQ: LNCE) shares were down significantly today, losing 15.43%, and this was due to the company revising its outlook, and providing 1Q 2017 guidance below analyst estimates. Let’s get right into the company’s announcement.

For the full year, the company expects its net revenue to be between $2.2B and $2.25B. Moreover, it expects its adjusted earnings before interest, taxes, depreciation and amortization (EBITDA) to come in between $290M and $315M.

Snyder’s-Lance also announced that its President and Chief Executive Officer, Carl E. Lee Jr., retired after serving 12 years in the company. Brian J. Driscoll, who was the former President and CEO of Diamond Foods and a director of LNCE, agreed to step in as the interim CEO. Brian Driscoll has over 35 years of experience in the food industry.

Take a look at LNCE’s performance on the daily chart: 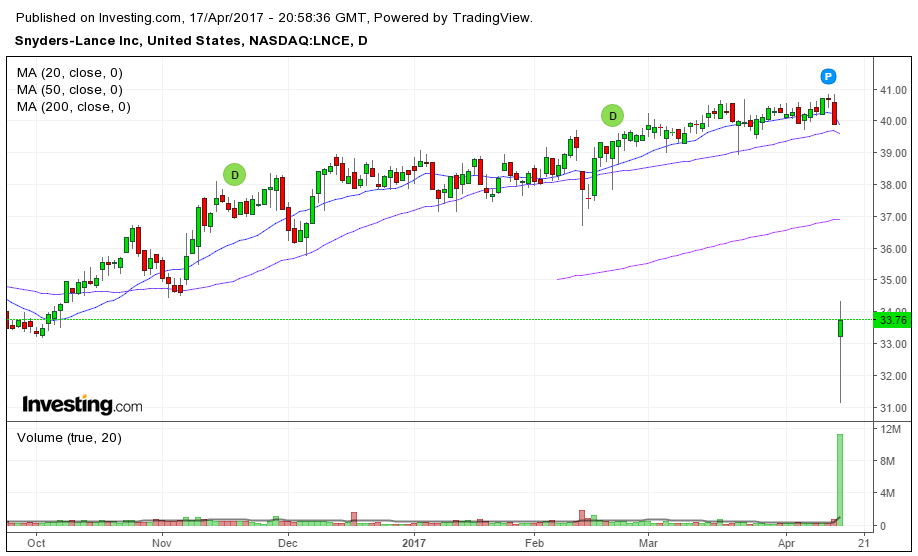 LNCE has a price-to-revenue ratio of around 1.4. LNCE has a forward price-to-revenue, based on next year’s revenues estimates, of 1.27. LNCE has a book value per share (BVPS) of 19.29, and it closed with a price-to-book ratio of around 1.75. The stock is trading at an extremely high price-to-earnings ratio of over 200, when using its EPS for the 2016 fiscal year, which is well above the industry average of 29.1. Snyder’s-Lance, Inc. has a forward price-to-earnings ratio of 28.1, based on next year’s earnings estimates, using the top-end of its guidance range.

LNCE shares were down after the company cut its guidance and announced the CEO stepped down. Now, there’s some uncertainty when a company announces its CEO is retiring. Since the company cut guidance, it may be an indication of weak performance, but it’ll be interesting to see how Snyder’s-Lance earnings will come in on May 8, 2016.