Tile Shop Holdings, Inc (NASDAQ: TTS) reported its 1Q 2017 financial results this morning, and the company beat Wall Street estimates. After its earnings beat, shares rose over 8% and a made new 52-week high. Moving on, let’s look at the Tile Shop’s 1Q 2017 earnings.

Tile Shop reported net sales of $92.1M for the first quarter of 2017, which was an 8.8% growth rate, when compared to its net sales for 1Q 2016. Now, this growth was primarily attributed to the company’s comparable store sales growth of 4.9%. The Tile Shop’s 1Q 2017 revenue topped the Street estimate, according to Zacks Investment Research, analysts were looking for its 1Q 2017 revenue to come in at $89.7M.

Tile Shop Holdings also reaffirmed its expectations for the FY 2017. The company expects its net sales to come in between $350M and $370M. Additionally, it projects its adjusted EBITDA to be between $74M and $80M. Moreover, it’s expecting its non-GAAP EPS to be between 50 cents and 57 cents.

Take a look at the Tile Shop Holdings’ performance on the daily chart: 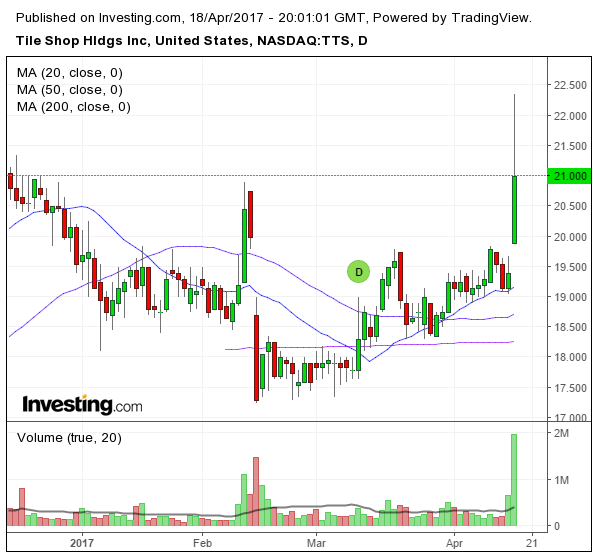 Prior to today’s earnings release, the stock’s technical pattern indicated the stock could reverse, after its 20-day SMA crossed above its 200-day and 50-day SMAs. Consequently, with this catalyst, the stock was able to breakout, with “heavy” volume.

The Tile Shop reported earnings that topped analyst estimates, and shares made a new 52-week high, but pulled back thereafter. However, TTS ended the day up over 8% on the day. Now, the company reaffirmed its FY 2017 guidance, as well, so it’ll be interesting to see whether it beats analyst estimates again and if it’s on pace to meet its guidance for the 2017 fiscal year.