Deutsche Bank analyst Chris Rigg stated that his analysis on THC could suggest that the company has at least nine hospitals with a very low market share, and they “would likely meet management’s divestiture criteria.” The nine hospitals are in seven markets, which currently generates annual revenues of approximately $1.74B and annual earnings before interest, taxes, depreciation and amortization (EBITDA) of $50M.

That in mind, Deutsche Bank estimates the sale of the nine hospitals could potentially result in proceeds ranging from $870M to $1.27B. The analyst maintained a Buy rating on THC, with a price target of $28, the stock closed at $15.35 per share today.

Some aggressive option action occurred in Tenet Healthcare Corporation. Over 15,000 May $18 calls traded on the ask-side, against 433 contracts of open interest, indicating a new bullish position.

Now, a couple of orders really stood out. The first came at 11:21 AM ET, when an option player came in and bought 5,500 April 28th $15.5 calls for an average price of $0.48, when the bid-ask spread was $0.30 by $0.50. What made this order so interesting is that the options expire next week, and are currently out-of-the-money. In addition, these options expire before the earnings date which is set for May 1, 2017*, after the close.

Overall, the options activity in THC was 6.7 times above average daily volume. That said, 28,000 calls traded in the name, which on an average day will see about 2,300 calls trade. Clearly this is a name to watch going into next week.

*Note: Tenet Healthcare Corp is subject to change. According to Zacks Investment Research’s survey of nine analysts’ estimates, the consensus estimate is a net loss of 53 cents per share. The company reported an EPS of 45 cents in the same period in the prior fiscal year. 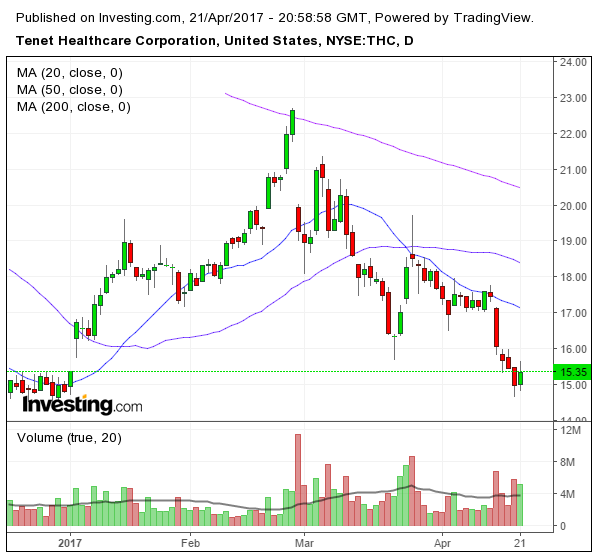 The stock is still in a downtrend, and trading below its 20-, 50- and 200-day simple moving averages. However, it’ll be interesting to see how THC performs next week, after bullish options positions were established.

THC shares were up over 2% today, after Deutsche Bank noted that the company could add anywhere between $5 and $9 per share, if it sold at least nine of its hospitals that had a low market share. What was more interesting was the options activity in Tenet Healthcare. It’ll be interesting to see how stock trades next week, as well as the company’s financial results on May 1, 2017.