Make no mistake about it. If there are opportunities to make money, traders will look into them. Now, something that has garnered a fairly decent amount of attention over the last couple of years has been the tracking of options order flow. More specifically, “unusual options activity.”

In a nutshell, some traders will follow large option block orders in hopes that the “smart money” is generally on the right side. It kind of makes sense, generally, they don’t give multimillion or even billion dollar trading accounts to uninformed traders. With that said, if someone is buying hundreds of thousands (or millions of dollars) worth of options… they are not a mom and pop.

And if they are pouring out that much dough…they probably know something.

Of course, there is more to it. In reality, we never know why an institutional investor is buying or selling large option blocks. They could either be hedging an equity position, or they could be speculating. For the most part, our interest lies in those trades that are perceived to be speculation.

But is seeing a large option block go off enough to mimic the same option order, or buy or sell the stock?

It’s slightly more complicated than that. After all, there are literally hundreds of large option blocks that go off…every single day.

Let’s take a look at a recent real trade in the market that worked out and why it was an attractive looking options play. 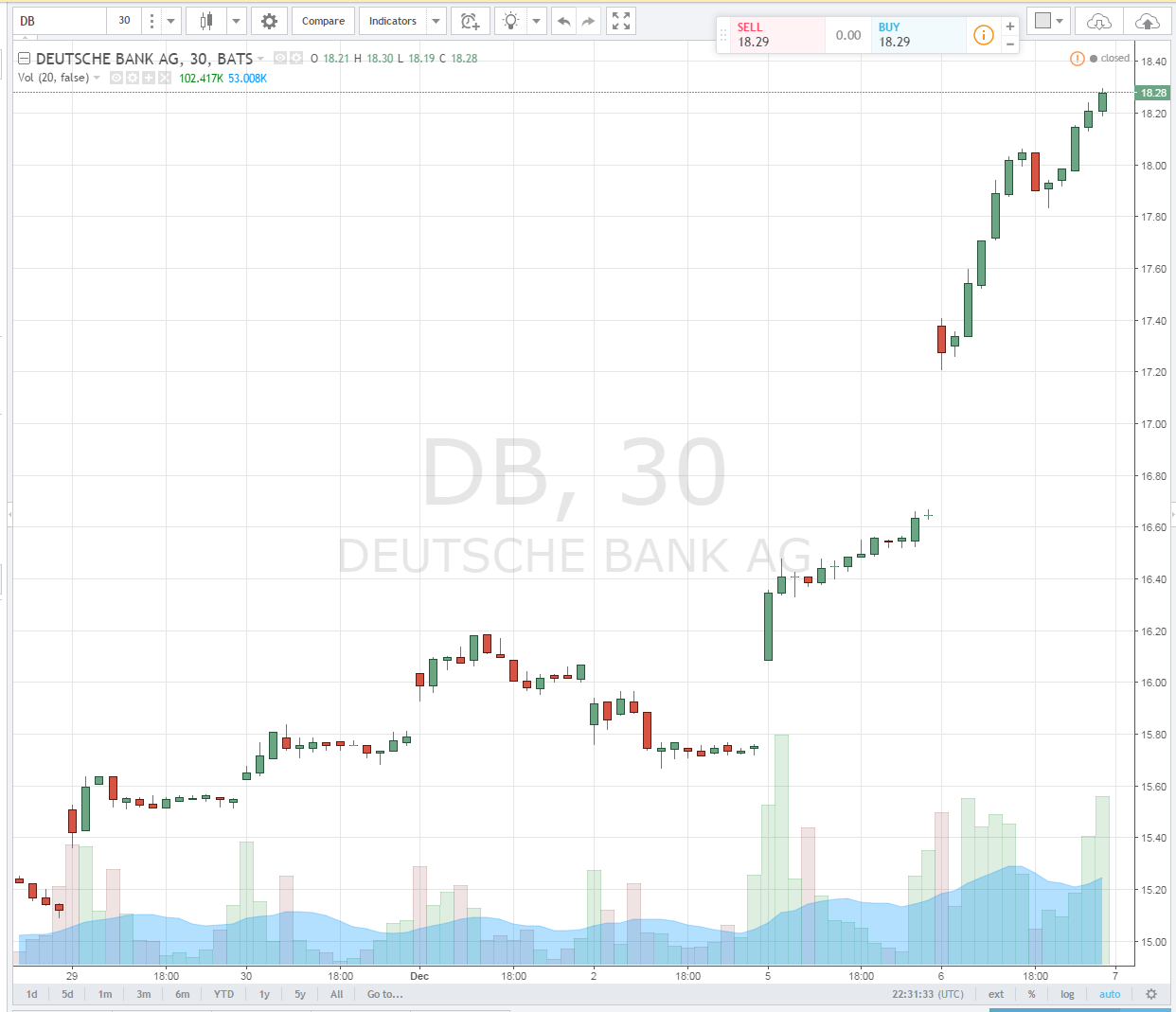 The stock was trading at around $15.76 at the time, when a trader came in and bought the December 9 $16.5 calls for $0.25 per contract. In other words, someone was paying $25 per contract that Deutsche Bank would be trading more than 6% higher in less than two weeks!

If they were wrong, they’d end up losing their entire premium.

Takeaways: The trader is betting on short-term options, and the stock needs to move fast or the time decay will eat up all the premium they spent.

Now, there was something else that was interesting about this order as well. The trader came in and bought 1500 contracts at $0.25. At the time of the order, the spread was $0.10 bid at $0.25 offered.

The trader was willing to pay up to get these options (we call this an “options sweep” when someone comes in and buys all available options up to a certain price). That’s kind of strange…considering that these options were set to expire worthless, unless the stock price made a pretty big move in a short period.

Takeaways: Trader lifted the offer aggressively and based on the open interest, we know that it was a new position.

Those options that were scooped up $0.25 were trading around $1.80 per contract.

Following unusual options activity can be a worthwhile venture. However, there are some nuances involved…you simply can’t copy or follow all of them because of their size. Looking for moves like this in the market can help solidify an opinion you might already have about a certain stock however.