LyondellBasell Industries NV (NYSE: LYB) shares were down just over 2.50% today, potentially due to the company indicating it might not satisfy analysts’ estimates. Moreover, the company noted it would be evaluating acquisition opportunities in its existing value chains, and could borrow up to $18B for its acquisitions. However, the options activity in LYB was the more interesting piece of news today.

However, maybe they knew that whatever the company would say during their investor day would not satisfy Wall Street’s expectations because they made a killing on this trade.

Well, if they were able to accomplish that they would have made a cool $1M+ on that trade. Now, this type of order was extremely unusual. Not only were these options expiring shortly, but in general, LYB doesn’t trade that many options on a given day.

These types of trades are always interesting to follow. Reason being is, when someone is trading that type of size in illiquid options, they are most likely going to have to exercise their options or use stock to get out. In other words, they needed the stock to drop to $90.15 just to break even on the trade. Of course, the stock did that, and then some.

A very solid trade nonetheless, and another reason why it pays to watch options flow… even if you don’t trade options.

Take a look at LYB’s performance on the daily chart: 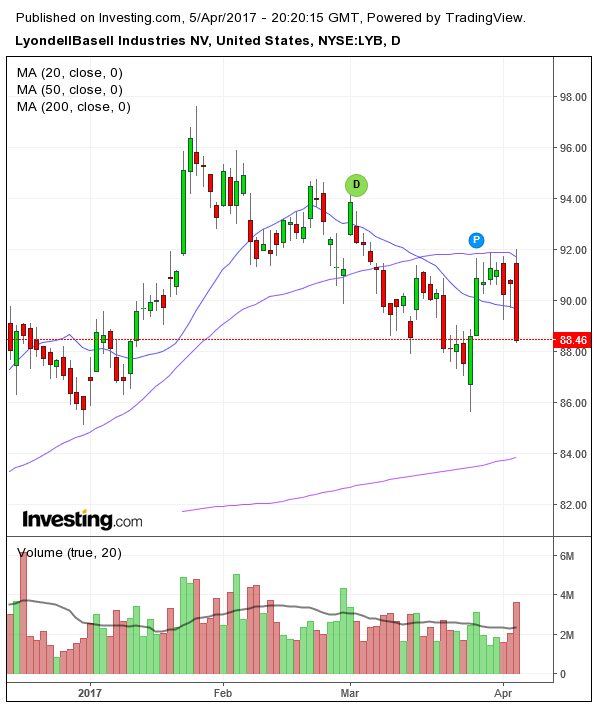 If you look at the chart above, LYB failed to break above its 50-day SMA, and broke below its 20-day SMA today. The next area to watch would be around $88, and if that level doesn’t hold, the stock could fall further.

The stock has a P/E ratio of 9.83. LYB has a book value per share (BVPS) of 14.969 LYB has a price-to-revenue ratio of 1.32, and a forward price-to-revenue, based on next year’s revenues estimates, of 1.21. LYB has a forward price-to-earnings ratio of 9.1338, based on next year’s earnings estimates.Moreover, it has a P/S of 1.25. Now, in relation to its industry, it is trading at an attractive valuation, but the company’s comments in its investors’ day presentation could send shares lower.

LYB is expected to report earnings on April 28, 2017*, and the average analysts’ estimate is  $2.76. *Note that the earnings date is not set in stone, and it could change.