How To Profit From Unusual Options Activity

Way back in the day, it was easy to identify when there was unusual options activity. Traders would simply take notice of an uptick in activity on the trading floors and other floor traders often piggybacked on those orders. With trading floors mostly gone today, that strategy no longer works. Traders today keep a close eye on volume and of trades to see if someone thinks a big move is coming.

What Is Unusual Options Activity?

Options are traded regularly in options markets. When activity on an option starts to look unusually high, it is a signal of unusual options activity.

What if you could legally steal some of the best ideas from the largest players on Wall Street?

Sometimes you can, if you follow unusual options activity. Now, this isn’t a different asset class, it’s just a term used to describe stock options that are experiencing greater than average volume.

An Example of Unusual Options Activity

On a particular day, there were 6,738 calls of Delphi Technologies (DLPH) traded.

What makes this order stand out?

To put this unusual options activity into perspective, on that same day, over 2.2M options in the SPDR S&P 500 (SPY) contracts traded. However, their daily average contracts are 3.8M. In other words, it’s not the size that matters, it’s the relative size. Because of that, 6K contracts traded in DLPH is considered unusual, whereas 2.2M contracts traded in SPY is not.

How to Find Unusual Options Activity

According to the rules of the game, every option trade that is placed (electronically, on or off the trading floor) must be reported and made publicly available. There are hundreds of large option trades that are placed daily. Now, most trading platforms will provide options information like volume, open interest, the price range of the option strike. For example, here is what an options chart on Thinkorswim looks like:

As you can see from the giant cyan (blue-green) volume bar, there were an unusual amount of options traded on the March 17.50 calls in Delphi, which is much higher than the fuchsia (pink) theoretical line on the graph would predict.

If you give me 7 days… I’ll make you a better trader.

Not All Unusual Options Activity Is The Same

Here’s what we know about the Delphi trade:

During the time of the trade, the March 17.5 calls traded for $1.00. However, the spread on the trade was in $0.85 by $1.05. In other words, the trader was relatively aggressive because they bought near the asking price. Not only that but those contracts had an open interest of about 300 contracts. That said, the 6,500 calls that traded is an opening position. You see, if this was an exiting position, there would have been at least 6,500 contracts of open interest.

We know the trader spent over $650K on this one single trade. Clearly, we are not dealing with a mom and pop trader here. Furthermore, Delphi has earnings after the date of the unusual options activity, and these calls that were bought cover the earnings date.

Does this mean that Delphi is going to rise ahead of its earnings release?

Not necessarily. You see, when you buy a call option your risk is limited to the premium you spend. That said, buying calls is usually not as risky as holding a stock position before its earnings event. For example, if shares of the stock plummet, your stop might not work. That would mean you could end up losing more than you wanted because of an opening gap lower.

In other words, if this trade is a stock substitution, where the trader is replacing the stock with calls then this trade is not as bullish as it first appears. It could be very well that this trader is playing the earnings event.

A couple of minutes before the close on a Friday, a trader came in bought 4,674 PCG 12 puts for $1.00 per contract. At the time of the trade, the stock was trading at $17.50. Now, this was a fairly massive bet, especially when you consider how far out-of-the-money these puts were. However, if you were following PG&E story closely, this bet was not as crazy as it appears.

You see, there were rumors that the utility company would not be able to support itself after facing liability charges of $30B or more for recent deadly wildfires caused in California. 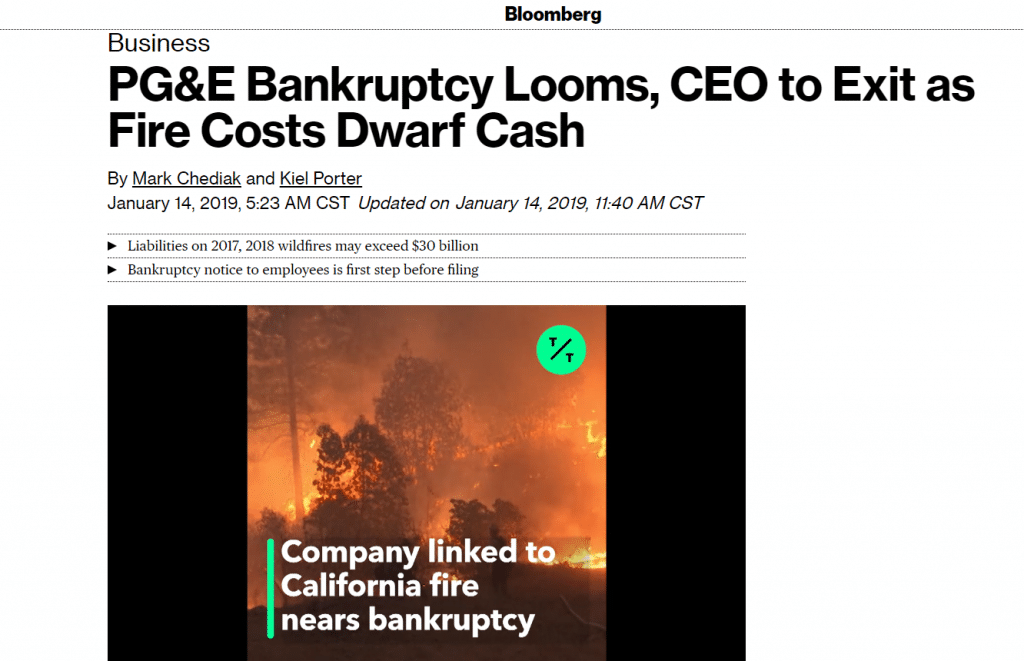 The following trading day, PG&E, California’s largest utility company was going to be filing for bankruptcy. Those puts … rose by more than 366% in one single day.

If they took profits, the trader made approximately $1.5M in profits.

Not bad for a day’s work.

Something important to keep in mind is that the stock market today is primarily owned by large institutions. They often build positions in stocks over a course of several months with the intention of hanging onto the stock for the long term. When those institutions sense volatility in the future, whether in the form of upcoming news or a potentially negative earnings report, they choose to protect their downsides by buying options.

This means that if you see unusual options activity, it could be because a large hedge is taking place, as opposed to someone expressing a directional view. These institutions want to hold onto the shares of stock they hold. However, because they’re trading their clients’ money, they don’t want their clients to withdraw their investments out of fear. Additionally, if those big institutions were to withdraw their investments, it could heavily impact the market. For these reasons and more, it makes the most sense for those institutions to buy options to reduce their short-term exposure versus actually selling their shares.

That’s why it’s so important to have a big picture view of a company, to know things about the company and what may be coming, versus relying on unusual options activity alone.

How To Scan and Filter for Unusual Options Activity

Why would anyone put a large sum of money on an option trade, one so large to execute that the trade must be placed with a floor broker?

Maybe they are informed. After all, they have tons of money and Wall Street connections.

So how can we figure out the juicy trades from the noise? We use an unusual options activity scanner. There are a lot of scanners/screeners available that scan for unusual options activity, and a lot of trading platforms have this functionality build into their platforms. However, some free platforms that you can use are ThinkOrSwim and Barchart. If you want to consider some paid scanners with additional features, some options to consider are:

Like any indicator, scanning for unusual options activity doesn’t work 100% of the time. Furthermore, its best paired when you know things about the company or the story. Of course, at the end of the day it’s all speculation, but here is what I look at:

What to Watch Out For

Which Side of the Trade

Unusual Options Activity Ahead of a Catalyst

There are two types of catalysts that can impact the stock market: transparent ones and unexpected ones. Transparent catalysts include events like the release of an earnings report, a product launch, or a dividend announcement. Unexpected catalysts are events that aren’t disclosed in advance and come out of nowhere, with no press announcement. Some examples of unexpected catalysts include events like an unforeseen comment from a CEO, an activist investor taking a position in the company, or a black swan event like a catastrophic safety issue.

If you don’t have any information about an upcoming event, your only option is to consult the charge and guess what could be happening. Oftentimes the seeds of a catalyst, whether or not it was transparent, are planted in the price action leading up to it.