Is it Time to Buy into the Crypto Fear Selling? Here’s What you Need to Know

Bitcoin had a monster move in 2017, and it’s been all the rage. Everyone has been trying to get long, but the recent negative catalysts caused bitcoin and cryptos to sell off. This led to crypto fear selling…and some contrarian traders think it might be time to buy bitcoin and altcoins.

No matter what markets you’re trading, it’s always helpful to keep this principle in mind. Bitcoin moved from around $700 to nearly $20K in just one year. The cryptocurrency market is unlike anything the world has ever seen before. However, similar to the stock market, it is being traded by humans, and we humans are full of greed and fear.  This causes crypto price movements to trade very much like stock price movements. Enough with trading philosophy, let’s look at some technicals in bitcoin and other altcoins.

What to Watch for in the Crypto Market 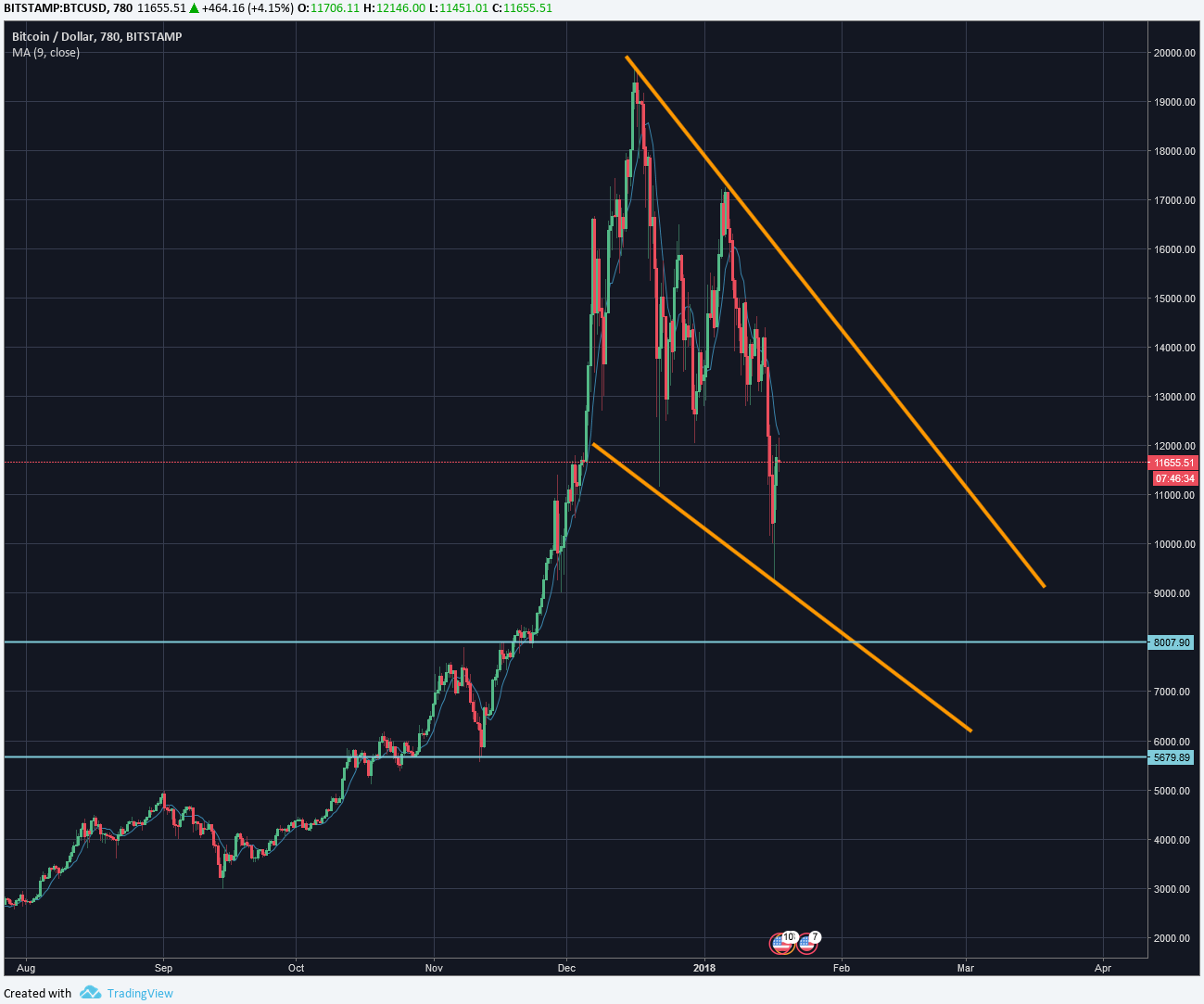 I see the $8,000 area being around where the current descending triangle is heading towards in Bitcoin. Now, BTC is highly volatile and it could easily trade in range between $6,000 and $9,000, an area in which the bulls and bears fought for a while.

Litecoin/U.S. dollar (LTC/USD) also has a descending triangle, and I think it could trade between the range of $140 and $200. There could be a lot of bouncing around here, bullish traders buying at the lower trendline and bearish traders selling on bounces. Here’s what we’re watching in LTC/USD: 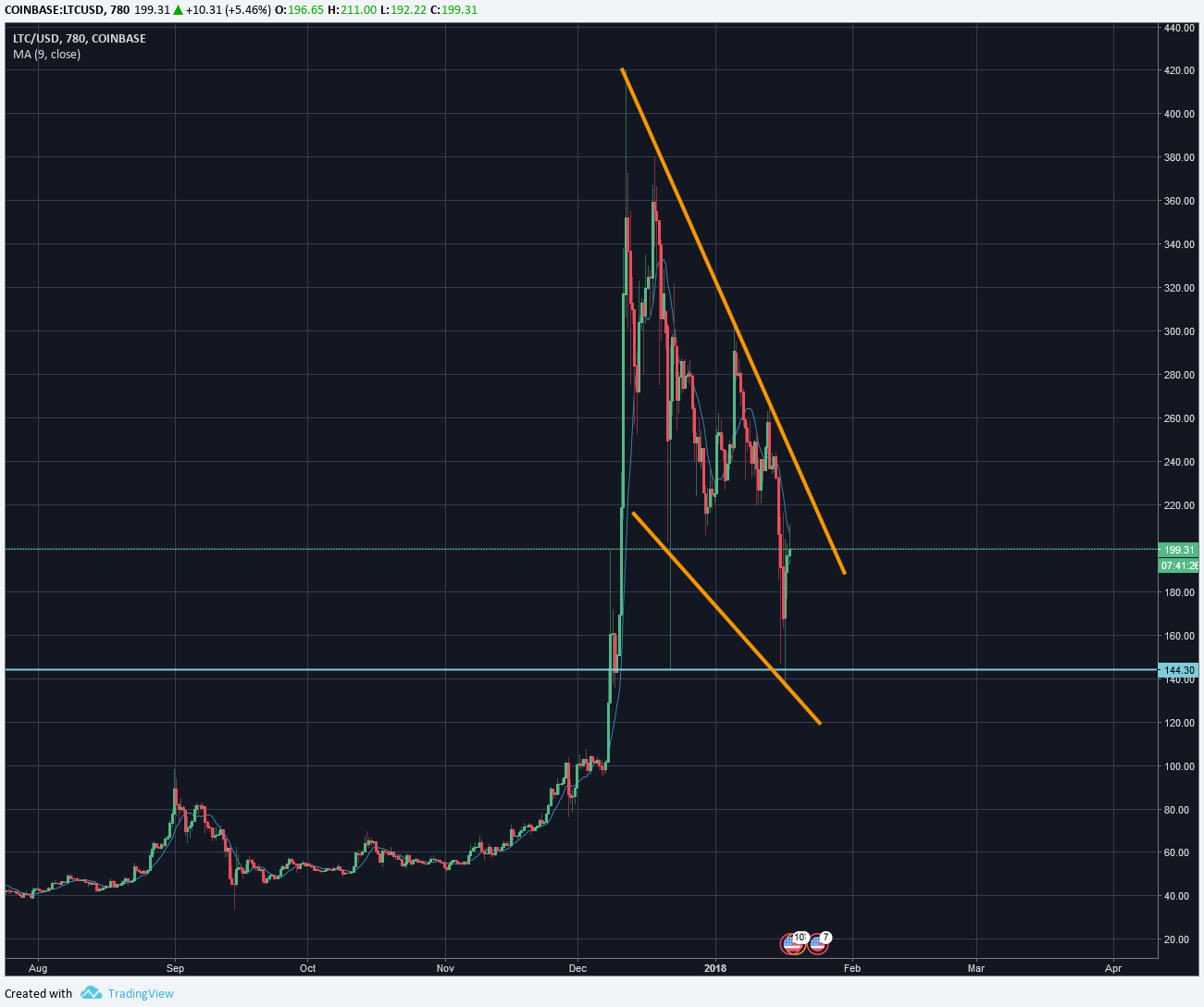 Now, Ripple/USD (XRP/USD) is another altcoin we’re watching after the panic sell off yesterday. The crypto fell over 60% from its highs, and it’s still trading in a down channel. I think if XRP/USD breaks above the upper down channel line, it could start running higher. However, if there’s a negative catalyst and XRP/USD doesn’t break out of the channel, Ripple could stay in this down channel and trade around the $0.85 and $1 area. Even though I think Ripple could pull back again, I don’t think it’s a bubble yet. Here’s a look at what we’re watching in XRP/USD: 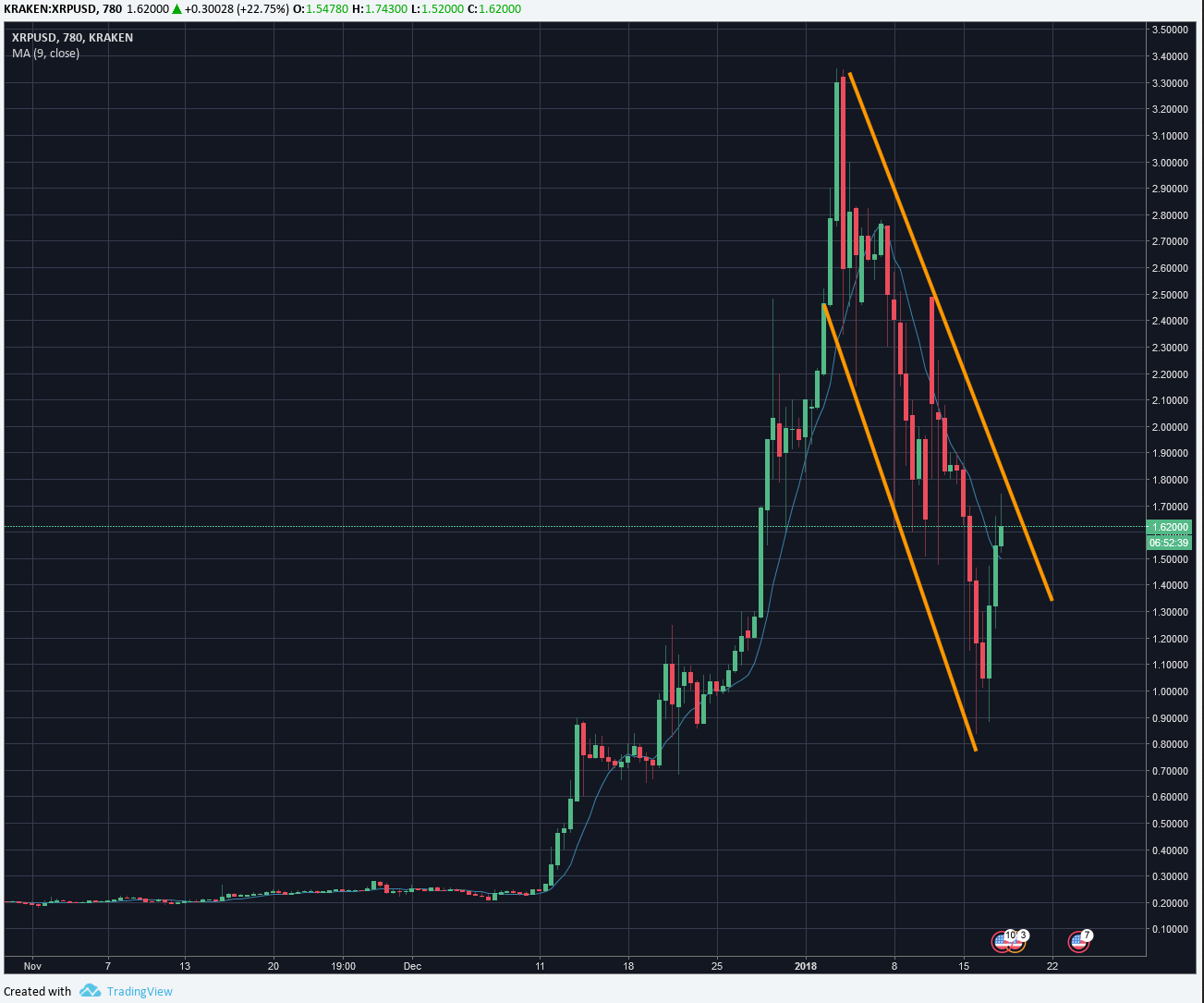 Another altcoin to watch is TRON (TRX). It’s part of our lotto-pick land, and it’s in the same space as Ripple. Although TRON’s technology is not nearly as well-developed as that of Ripple’s yet, I think there’s an attractive opportunity for huge gains on it. TRX/USD is currently trading around $0.09 and $0.10, or 0.000008 and 0.000009 BTC, and it’s broke out of its descending triangle. I think this could easily retest the $0.20 and $0.30 area. Here’s a look at the 13-hour chart on TRX/BTC: 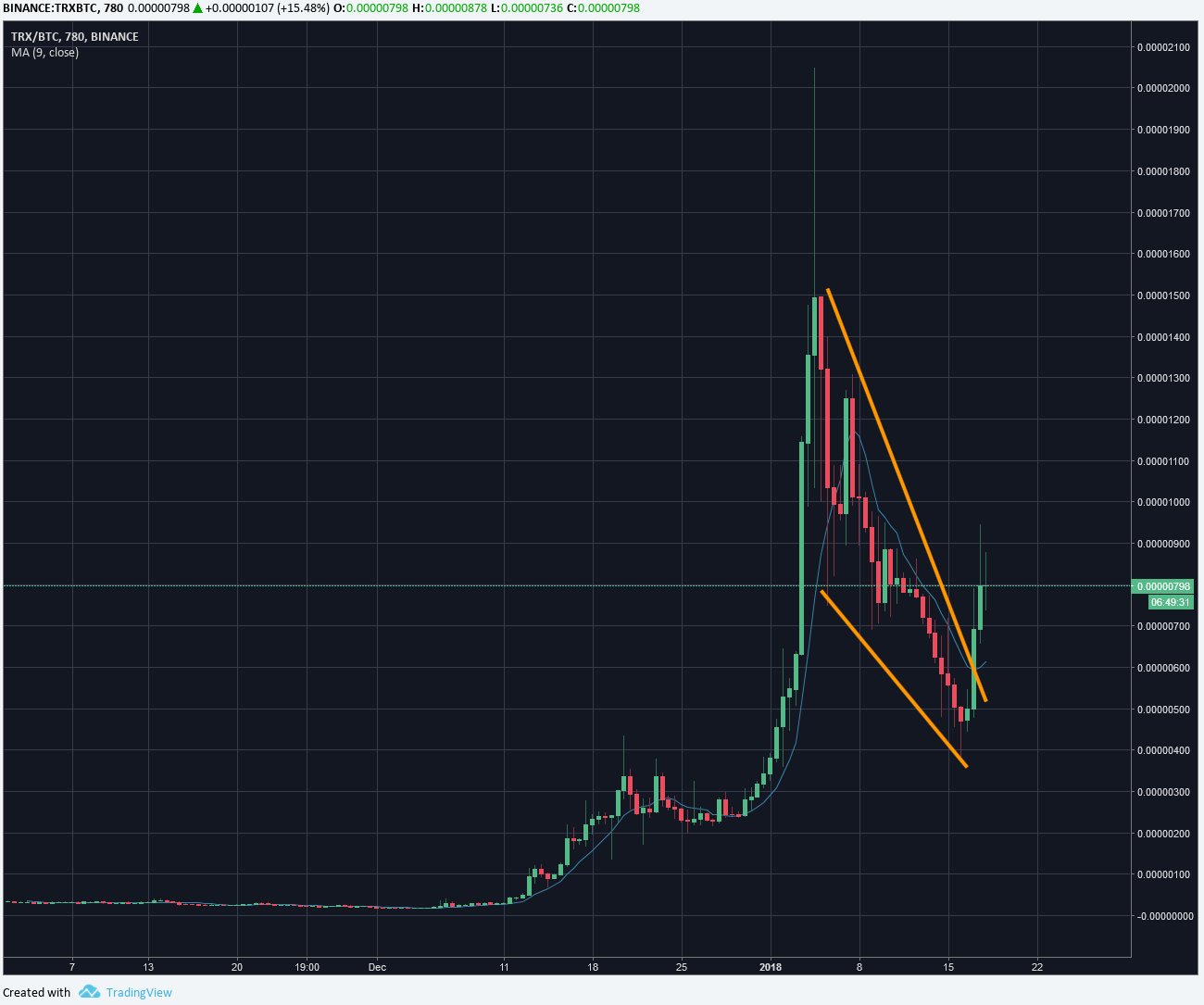 Our goal as a community is to remain focused and calm during these times. We are focused on BTC, LTC, XRP and TRX, and will plan out a trade after the sell off.  So, even if a rebound in the crypto markets is short-lived, we are still able to capitalize on it. Again, keep in mind the crypto market is highly volatile, and you should understand the risks involved. Most importantly: Don’t put all your eggs in one basket, and “Be fearful when others are greedy, and greedy when others are fearful.” 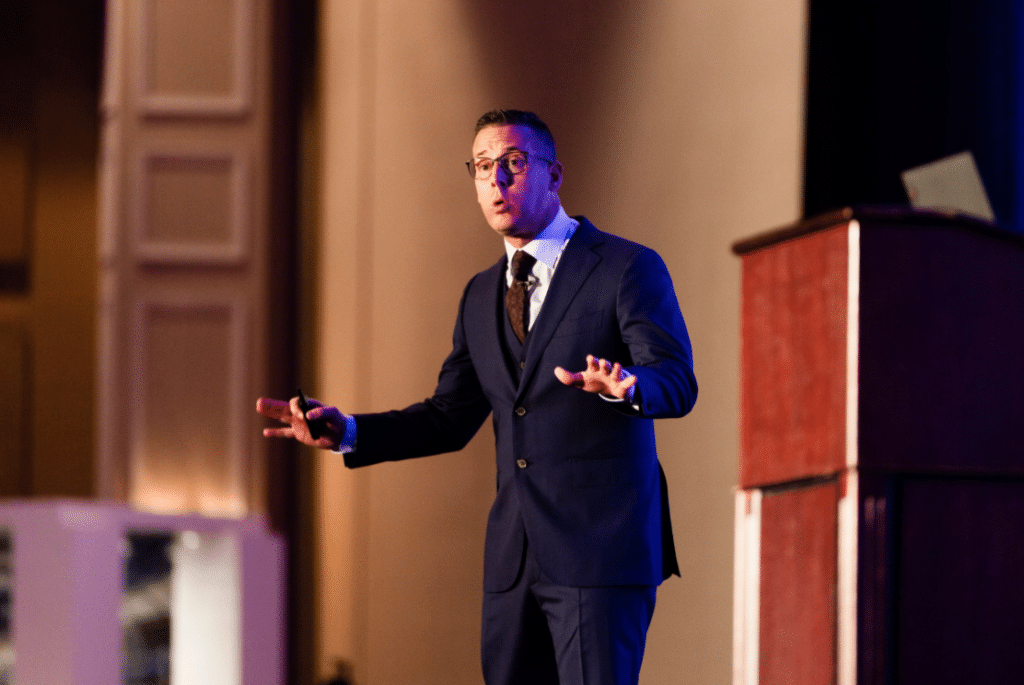 For some reason, when momentum stocks start to take off… Traders start to throw… 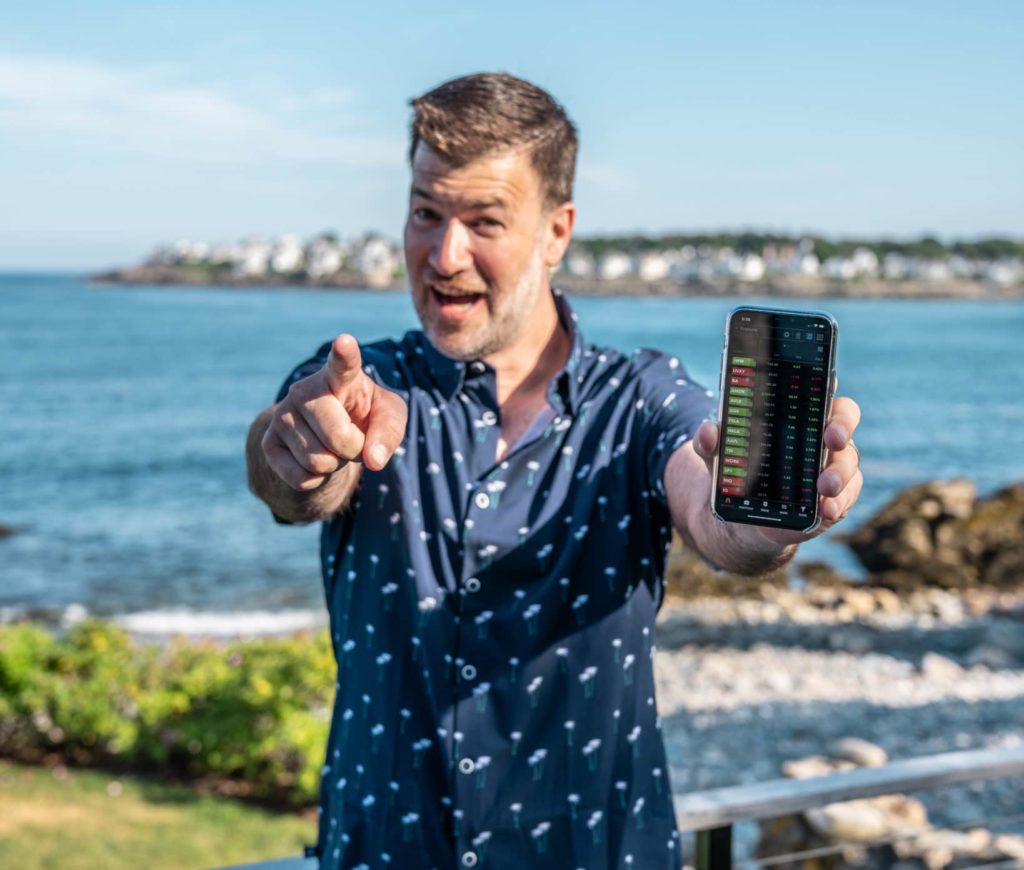 All eyes focused on the Fed last week, and rightfully so. No one expected…

For some reason, when momentum stocks start to take off… Traders start to throw…
Total Alpha Jeff Bishop September 20th

All eyes focused on the Fed last week, and rightfully so. No one expected…
Biotech Breakouts Kyle Dennis September 20th