Part I: Wildfire Safety with PG&E

PG&E (PCG) was the culprit of some of the biggest and most destructive wildfires over the past few years.

So massive that they ultimately pushed the company into Chapter 11 bankruptcy in January of 2019.

What exactly went wrong and where are they now?

Join me on this interesting journey as I look at the conditions and events that unfolded to take PCG’s stock from all-time highs to a nearly complete wipeout.

While wildfires are a natural part of California’s landscape, the fire season is said to be starting earlier and ending later each year.

Fueled by this drought, an unprecedented buildup of dry vegetation and extreme winds, the size and intensity of these wildfires is like nothing ever seen.

Climate change is considered a key driver of this trend.

But there’s more to it than just that.

PCG equipment is old, very old… and much of it was not well maintained over the years as the company was said to put profits ahead of safety.

While they may have been fine during the past “normal” wildfire seasons… with these new conditions, all it took was ignition to set off some of the biggest most destructive fires to date.

And with human lives lost in the process, the public needed someone to blame.

Enter California politics and PCG was in trouble.

As you can see in the chart below, the stock was hitting all-time highs at $71 just before the news hit that their power lines may have sparked the massive wildfires ravaging California at the time..

And the stock immediately plummeted.

After some time to assess the damages, given the mounting liabilities, PCG suspended their dividend and the stock again plummeted in response. 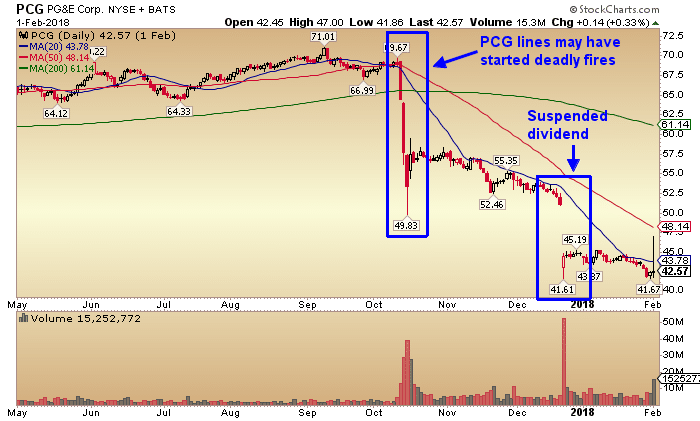 But this was the right business decision.

The goal was to sure up the financials and things back in line.

Once they get everything settled, PCG could then work back up to their former glory.

That is until… The very next wildfire season.

In November 2018 another fire broke out and this one is also caused by PCG lines.

The stock tanks to $17.26 within days of the 2018 fire announcement, leaving investors and the company to assess the damage.

So ugly PCG then files for bankruptcy in January 2019 and the stock takes a dive to $5.02. 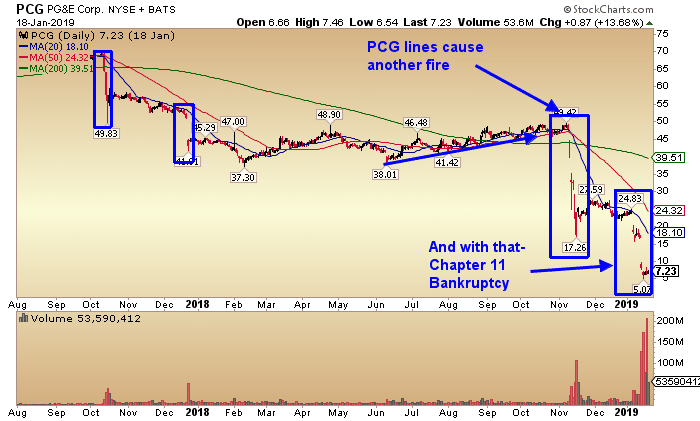 Now below is a chart of the company’s time in Chapter 11… and there is no shortage of drama here as the California government steps in and has a lot to say. 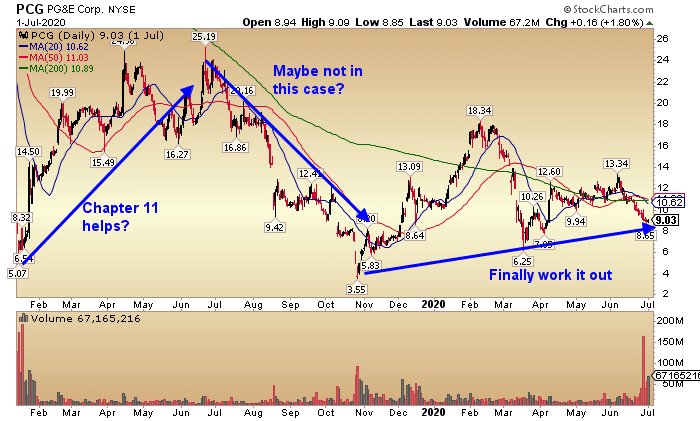 As you can see as soon as they filed for Chapter 11, the stock made a nice rebound over the next 6 months as investors saw the protection as a good thing to allow the company to restructure and come back stronger.

But this is when the third player enters… The California government.

This is California so it’s not going to be straight forward… even though PCG is by far the biggest supplier of energy in the state.

Normally the question of “too big to fail?” would come up…

But the governor wants to show strength in response to the outrage from the citizens.

So he comes on strong with the intention to make a lesson out of PCG.

Needless to say it was one of the more chaotic and messy reorganizations I have ever seen.

At times it looked like a group of bondholders was going to come in, buy up cheap debt, and wipe out the shareholders…

This would have been a huge loss for capitalism and free markets as the company showed the ability to constructively reorganize.

Yet this option was on the table and even teetered back and forth very close to wiping out the shareholders… which would have essentially gifted the company to the bondholders.

Due to all of this uncertainty, the stock plummeted back down hitting a new low of 3.55.

This was at the peak of looking like the bondholders would take over.

Luckily it got worked out without fully wiping out the shareholders.

And PCG emerged from Bankruptcy at the beginning of July of this year with the stock in the $9 range.

It’s messy so far… while investors are seeing value here, there is also a lot to consider on the side of risk… 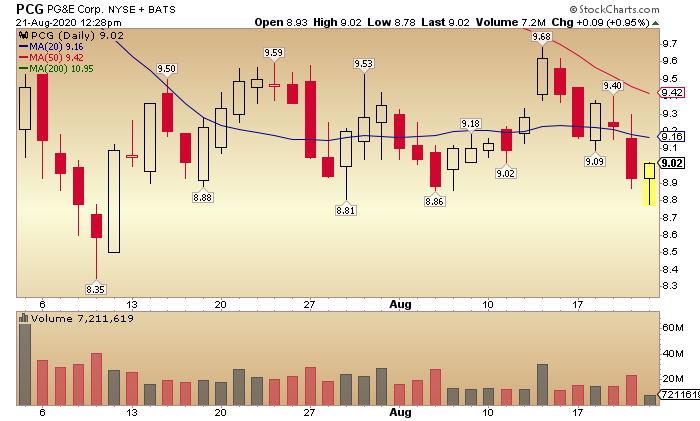 In a nutshell, that pretty much covers what went wrong.

Now for the more important question…

Tune in to Part II this Monday when I look at what is happening with the stock right now.

It’s actually going to be a very interesting real-time case study to watch this play out.

In the meantime… get the tools to get started trading with my stock trading starter pack.