Part II: The Fire Rages On With PG&E

Continuing from my post about the factors that led to PG&E (PCG) filing for Chapter 11 bankruptcy protection, and how it ultimately played out… (read that part here)

Leading to the newly emerged company we have today.

Here I wanted to dive in a little further and look at where PCG is now.

And the big question we all have…

After all, this was a company with a $36B market capitalization…

And now sits at about half that.

It just emerged from Chapter 11 less than 2 months ago, so let’s take a look at the current conditions.

This is a company that was sitting at a $36B market cap… and is currently half that.

But here’s the thing… PCG has a captive customer base and proven earnings potential.

So is there value here?

It’s hard to think there wouldn’t be.

And with the last round of funding before emerging from bankruptcy being fully subscribed at $9.50 per share… that gives a little view of where some of the big money players find value.

But while investors might be seeing value here… there are some huge risks to go along with it.

And really all comes right back to the potential of starting another wildfire.

Just think about it…

All it would take is one big wildfire and inventors would be jumping ship as fast as they can.

No one wants to go through a Chapter 11 like that again.

And this time the company is more leveraged, so if they get stuck with another big liability it could be over for the shareholders.

And the worst part about the risk?

It’s not something that can be easily controlled because there are 3 players involved… mother nature, PCG, and the California government.

It’s largely due to change in conditions that lead to bad wildfires.

And PCG is at fault for its old equipment that is more likely to get damaged in the winds and storms causing a spark to a fire.

But the government isn’t a hero here either… They have mismanaged the removal of dead and dry brush and debris from the land which makes for a quick spread and difficult containment.

So here we are…

PCG is still sitting on a massive amount of the oldest equipment in the industry which needs to be upgraded… and this will take time and money.

Meanwhile they will be managing the hazardous fire conditions with power shut offs which certainly won’t make customers happy. Nor is it a surefire way of containment.

And as an investor, you are putting your trust in a system that’s brand new… and not exactly set up for success.

But it gets better…

Just in time for… Fire Season

PCG made it out of chapter 11 just in time for…

You guessed it, fire season.

According to the California Department of Forestry & Fire Protection, of the 20 most destructive wildfires in California history, 12 of them took place in September and October.

And if you’ve been paying any attention, the fires have started…

However this time… none have been caused by PCG.

But that doesn’t mean the stock is in the clear…

As the fires began raging, PG&E’s bonds accounted for most of the corporate bond trading for utilities according to the data tracking platform BondCliq.

The fires weren’t started by PCG… this time it’s been the heatwave and lightning.

But it looks the same… lots of smoke and destruction. So investors are spooked from what they remember last time.

Think about it… nothing is going to change the fact that the conditions in California are prime for wildfires.

All it takes is one spark… and with PCG still owning some of the most outdated equipment in the industry… The risks are real.

Coming out of bankruptcy must have felt good and investors that took the risk at the lowest points have a hefty return already.

And technically there’s probably a lot more upside… but that’s only IF they can get through fire season alive.

The way it’s looking at the moment is even if they don’t cause a fire… every fire reflects on them and freaks people out.

It’s in the psyche now..

Imagine owning the stock… every single breaking news announcement about a California wildfire would have your heart sink to your stomach in no time flat.

If it ends up being lightning, you can relax a little.

But really… as long as the smoke is out there… the stock will probably be flat, just out of fear.

So is the risk worth the reward?

One fire and it’s all over… so I don’t know.

You have to make that decision on your own.

For me, if I get a good short-term setup I will trade the stock no doubt.

But I certainly won’t be stocking up on PCG in my kids college fund at this time.

Everyone has different levels of risk reward, and where they see value etc.

It’s hard to put the risk of a stock’s value in the hands of mother nature and the state of California.

But that’s the long term… let’s take a look at Right Now.

And the stock is just under a major resistance level at about $10.

If it can break above there with a surge in volume, we could see some good momentum with the next highs at $13.34 and then $18.34.

Keep in mind these were prices made during bankruptcy reorganization as investors began to see the likelihood of PCG emerging successfully.

They definitely will have some psychological pull.

Back to the price action…

If PCG can break out of the consolidation… there is some good upside trade potential.

In fact, I can somewhat limit that long term risk by simply grabbing on to momentum and taking my gains quickly… 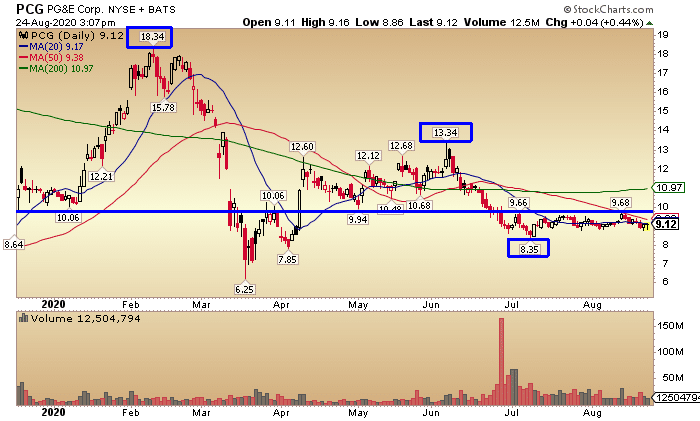 To learn more about reading charts… including my personal trading setups.