As someone with a small account, one of the most difficult obstacles to overcome is the Pattern Day Trader (PDT) Rule. It states that if your account is under $25,000, then you are limited to 3 round-trip day trades in a 5 day period.

In other words, if you are trading a small account, and you want it to grow fast, like what I’m doing with my Small Account Challenge, then you’ll have to change the way you trade so you aren’t labeled a “pattern day trader”…

You see, if you are labeled a “pattern day trader” by your broker, they may decide to “freeze” your trading account for upwards of 90 days.

That said, the trading strategies that I teach my clients are built specifically for avoiding the Pattern Day Trader Rule while trading a small account.

Not only have I been able to avoid being labeled a pattern day trader, but my trading has thrived, as I’ve taken my small accounts to triple digit growth over and over again.

And I’m going to walk you through steps you can take to avoid being labeled a pattern day trader.

Day Trade without the Label

If you have a small account… you’ve probably heard of the dreaded Pattern Day Trader (PDT) rule.

Basically for your own “protection,” if you have an account with under $25K… then you can’t day trade.

Regardless, this creates a barrier for you when trying to make money trading.

But you are in luck because I have created a strategy that gets around the PDT rules…and I’ve been doing it for years.

How the PDT Rule Affects Your Trading

With a small account (under $25K), you can only day trade three times in a five-day trading window.

For example, let’s say you buy a stock at 10:00 AM and sell at 3:00 PM… that’s considered a day trade… and if you do that three times within one business week… then you risk being locked out of your account.

If you don’t have a trading style that allows you to work around this rule… and you focus on quick profits… your account can actually get locked.

You see, the consequences of placing more than three day trades are that your account can get frozen for some time… causing you to miss out on opportunities.

However, I’ve figured out how to avoid this rule altogether.

My “End of Day” Trades

For the most part, I use my easy-to-find chart patterns to find trades that allow me to avoid the PDT rule.

For example, I have specific setups that allow me to buy stocks at the end of each trading day… and then sell the next morning to lock in profits.

I’ve worked around the PDT rule… even though I would be selling under 24 hours from when I bought the stock… it’s not considered a day trade.

Here’s what I’m talking about…

I spotted a setup in SNDL on a Thursday…

I bought the breakout that afternoon and sold Friday morning on a big move up. 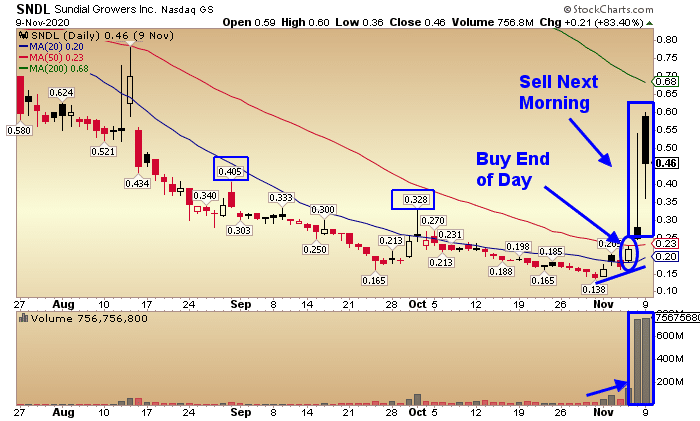 I bought SNDL based on the criteria I look for in my “end of day” momentum trades.

Getting in at 3:32 PM (EST)… (the alert screenshot is central time)

And the very next day…

I sold SNDL for a big profit on a gap up in the morning.

Skirting my way around the definition of a day trade in the PDT rules.

By getting in at the end of the day and out the next morning, my trades won’t put me at risk of being locked out by the PDT rule.

And my strategy was specifically built around this principle.

The other way I get around the PDT rule… by simply limiting the number of day trades I take per week.

If you have an account under $25K, and if you read between the lines… you can still day trade… you just can’t make it a habit.

You see, you can actually place three day trades within five trading days. That means you can have day trade, you just need to stay within the limit.

For example, sometimes one of my small account trades just takes off to my target right away…

You better believe I am going to take my profit. And this will be one of my 3 for the 5 day period.

Since my strategy is set to take stocks overnight for big moves the next morning, I don’t have to worry about running into a large number of day trades…

So when it does happen, I take the profits and keep trading my strategy. 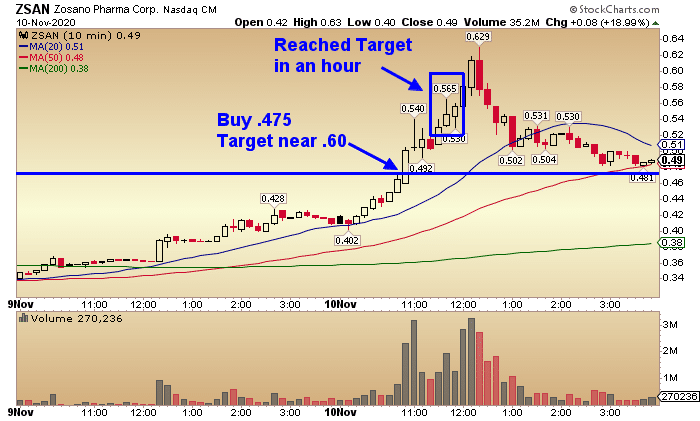 I grabbed shares of ZSAN at 10:56 AM EST (email below is central time).

I alerted my members to the trade from .475 with a target on an overnight move to near .60 if all goes well.

Well ZSAN moved faster than I had expected and was sitting in my target range just an hour later in the same day.

So I had a decision to make.

For me it’s simple..I don’t want to risk being at my target and not locking in gains. 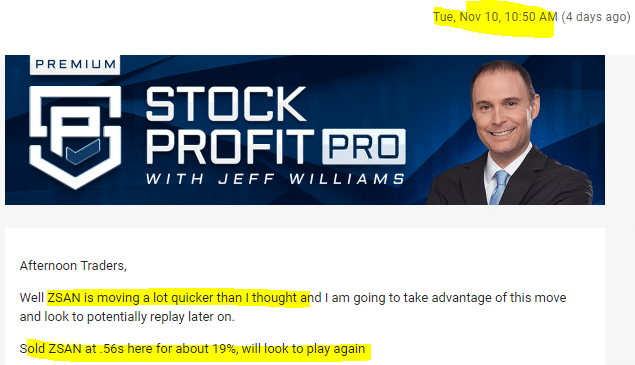 As long as you manage the number of day trades (as defined by the PDT rule) you take in a 5 day period, you can still take advantage of intraday moves without the risk of being labeled a pattern day trader.

Don’t let a small account and the PDT rule keep you from profiting in the stock market. As long as you have the right strategies, you won’t have to even worry about it.

Click Here to Learn simple strategies to rake in consistent trading profits while getting around the PDT rule.

Benefits of a Live Trading Room